I’m starting this new project mainly to test out V-Ray for Blender. The main things I want to test are hair, displacement maps, volumetrics, DOF and motion blur. Here’s the main character to start with. It’s going to have a full environment.

Without her jacket. I think the silhouette looks more interesting like this, but we’ll see.

Her boots. They’re the first things I fully retopologized. 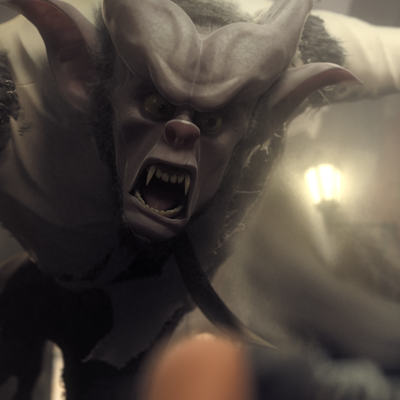 really nice. I think the hands may be a bit small though. could be my imagination.

They do look small in comparison to the forearms.

Yeah, the hands do look small. I can never get them the right size on the first try.

Here’s her bag. This is also the first render I’m showing coming from V-ray for Blender.

This is looking really good so far, keep it up!

Great work ! For the cloths, you sculpt with blender or you use an othe software like marvelous ?

Looks really promising already! Always interested in V-Ray. Interesting to see how it turn’s out!

Here is a render of her headphones. It also demonstrates my favorite part so far in working with V-ray: proper displacement subdivisions (though I think my settings might be a bit off). I really hope Cycles gets that feature finalized soon.

These headphones make me want to go and do some micro work again. Love the detail especially the stitching. Are the soft parts sculpted the retopologiesd?

@Lezly and MonkMonk: The cloth is sculpted in Blender. For the headphones, I baked out a displacement map for use in V-Ray.

Here’s an update. It’s a vampire. Anyway, here’s an update to the vampire hunter herself, taking into consideration the various critiques on her design. I wonder if it’s going to be animated?

It’s not going to be animated. Just a simple camera move, but I’m going to be doing different lighting scenarios as an exercise.

Here’s an update. It’s the last character sculpt for this project. There’s going to be a swarm of duplicates of this little guy, so I’m focusing more on the silhouette of the character rather than the details.

you should give him some shape keys so you can easily make adjustments to the duplicates. also, with those big ears, you could take a nick out here and there to the same effect.

It’s not going to be animated. Just a simple camera move.

you should give him some shape keys so you can easily make adjustments to the duplicates. also, with those big ears, you could take a nick out here and there to the same effect.

Good call on the shape keys. I’ll definitely give that a shot. As for the nicks, I think it might be a little obvious if over a dozen characters all have the same nicks in their ears.