Enhanced UI layout for modifiers with handy features. Available also in the sidebar and as a popup.

Q: Would be possible to add drag and drop for the list?
A: Unfortunately the answer is no, it’s not possible.

Version 1.0 (popup only) is for Blender 2.79 too, later versions only for 2.8x and newer. The current version requires at least Blender 2.92.

I hope some of you find this addon useful. Let me know what you think!

Disclaimer: When using the list layout, since Blender 2.90, every time a modifier gets a new feature, I need to manually update the layout, and I may not always do that immediately. So there may be a delay. 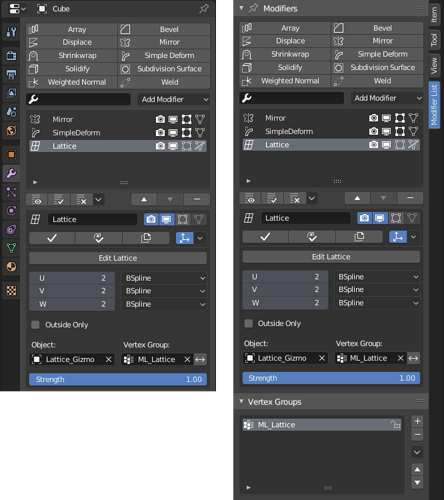 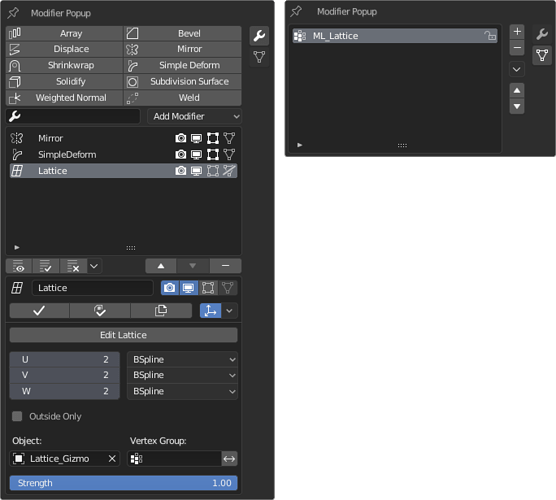 Default hotkey for the popup is Alt + Space. Inside the keymap editor, you can find it under 3D View > 3D View (Global) > Modifier Popup.

It’s recommended to add shortcuts under the 3D View > 3D View (Global) category so they are availabe in all modes.

Preferences are auto saved into your Blender config folder

Would it be possible to add a section for adding/removing/modifying Vertex Groups, as well as Edge weighting/sharpening? Since a lot of modifiers use these to influence their behavior?

Either way, more popups for helping to work in full screen is great! Thanks!

I will add a new tab for handling vertex groups and bevel weights + edge creases at some point. Maybe I could also add edge groups for managing weights and creases like this addon does: 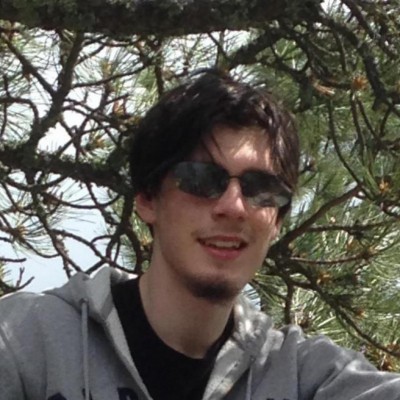 I updated the releases on Github. They now have a proper .zip that should install without problems if it didn’t install before.

Beautiful! This is like a good redesign for the modifiers panel. I always thought it was a pain to even change the order of modifiers in the default interface, cause you kinda lose track of the order every time you click the up and down arrows. I had a poor man’s version of what this add-on does made with the Pie Menu Editor, but I will definitely try this one out. Thanks!

I love this! Thank You!
An Idea: Options for Add-on Tab. ( in addon preferences )

Putting this into sidebar should be easy and I have considered that. Maybe it would make this addon more useful also for users that don’t care about popups. Also, there this wouldn’t have the restrictions of a popup. I will propably add the option in a future (next?) release. Maybe I also need to rename this then.

I noticed two bugs…
1.) Doesn’t save the changed hotkey.
2.) “Pick object” ( mirror modifier for example ) is not working.

Same for me with the hotkey. But I managed to change it in prefs>Keymap

Thanks for reporting but these issues are not actually specific to this addon.

Sidebar version wouldn’t suffer from this.

so guys, until this bug is fixed, is not there a way to disable this addon from the space bar use?

in the end I need it with “alt + spacebar” …
ok I guess that for the moment I edit the code manually :)))

edit:
I do not know if it is a bug of this addon, but doing a search among the “spacebar” shortcuts I discovered that this addon had created more shorcut with the same works, probably pressing several times previously to try to change the shortcut …

I realized it because once I modified the code adding manually “alt + spacebar”, the addon continued to be mapped even on “spacebar” …

I uploaded a new release for 2.8. Now alt + space is the default hotkey. I also disabled the ability to modify it in addon preferences for now to avoid problems.

In keymap editor, it can be found under 3D View -> 3D View (Global) -> Modifier Popup Panel.

Only Blender 2.8 is supported from now on. Also, the name has changed from Modifier Popup Panel to Modifier List since this addon now also has a tab in the sidebar. Because of that, when you install this new version, you need to remove the old version and add your favourite modifiers again.

By the way, the popup is now vertically a bit more compact. A bit too compact, I think, but that’s unavoidable with the tabs. 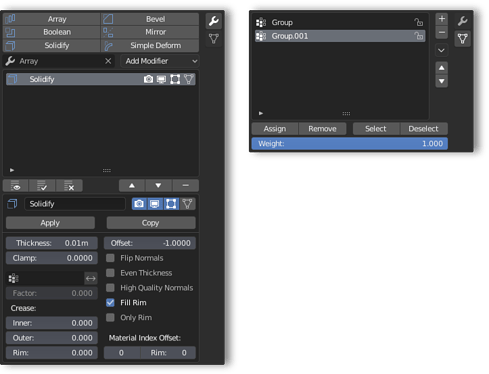 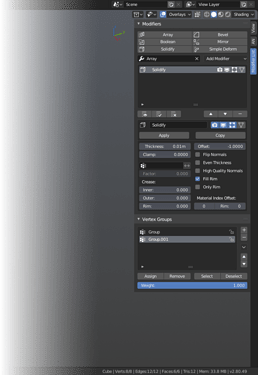 I thought of adding edge weights and creases too, but it turned out to be not as easy as just copying a data path, so I didn’t add them. Maybe at some point in the future, but it’s not a priority for me.

I get such error with latest build:

@COB-666 Thanks! Does it work correctly for you?

@blndrusr Thanks for the report! I’ll try to fix it soon.