@Symstract
I’ve encoutered a bug in the latest version, Blender 2.92.
If I alt click on the mirror modifier button, it does not create an empty at the world origin, whereas a gizmo is created using shift.


As for feature requests that popped up while I was messing with my hotkeys:

E4: Applying a modifier seems to be working using the default apply command “object.modifier_apply”, but only from inside the properties panel. In case anyone needs it, check the command in the keymap. But don’t assign a shortcut to the apply modifier in the Modifier list addon, as this is a different command and does not work (at the moment).

If I alt click on the mirror modifier button, it does not create an empty at the world origin, whereas a gizmo is created using shift.

It’s shift + alt to add it at the world origin.

Is it possible to apply the currently highlighted modifier with a hotkey?

It’s not possible because the operator currently requires a modifier name as a property to work, as you thought. But this could be changed to work without it.

Could you make it so that I can traverse the modifier stack with hotkeys like so (and pretend the mouse cursor + clicks were not there)?

I could add new operators for that.

I can make that option an operator property so it shows in the keymap editor.

Thanks for the suggestions, I’ll add them to my todo list.

Thanks for your continued work on Modifier List, @Symstract, much appreciated.

I’d like to ask for an option in the Preferences to only have the modifier list buttons in the Modifier Properties tab and in the hotkey pop-up window, but not the rest of the Modifier List UI. That way a user could choose to work with Blender’s drag-and-droppable default modifier UI, but still have the convenience of custom modifier button access.

I hope this is possible, and the buttons are not an inseparable part of the Modifier List UI.

Well, previously I’ve said no to this request but I guess I can add a setting if multiple people would like it. It’s not difficult.

Do you prefere the default stack nowadays? Just convinient to see multiple modifiers at the same time (especially with drag and drop)?

If I may chime in on this: rather than only putting a button in the preferences, could the toggle for the Modifier list/ Vanilla Blender stack be on the top of the properties panel too, so you can switch on the fly?

Personally, I prefer the list, so I only expect to use the vanilla system for drag n drop, if at all.
@Metin_Seven what do you think about these two points?

While I love a lot about the Modifier Stack add-on, I also like a number of things of the default modifier stack: the drag and drop functionality, the shortcuts (Control + A to Apply, Shift + D to copy, etc.), but also the new layout inside the modifiers, with the less important options being hidden.

What I really miss when not using Modifier List is the easy pop-up menu and the easy button menu. I dislike having to click on Blender’s modifiers drop-down menu first, then browse through the large list and click again to activate a modifier.

Until recently I used my own custom modifier button menu, created using Pie Menu Editor. Maybe I’ll return to that for the time being.

Looking at the latest posts in the PME thread, it’s broken in the latest 2.93 Alpha versions.

I also like a number of things of the default modifier stack: the drag and drop functionality, the shortcuts (Control + A to Apply, Shift + D to copy, etc.)

@Metin_Seven
In case you didn’t know already, if you disable the addon, you can set the hotkeys to apply, delete and duplicate the modifier, if not set already. With the properties panel active, this will allow you to use those hotkeys. They don’t work inside the pop-up panel unfortunately. And deleting the modifier (and possibly copy if there aren’t conflicting hotkeys in the 3D workspace) work in the viewport too.

is it possible to make button to toggle only visible modifiers?

For example, if I have hidden some modifier, then switching toggle it does not work for manually hide modifiers, this option would be much more useful than the current one

object.ml_toggle_all_modifiers - its good option but i need constantly disable some unnecessary modifiers.

Returned to this good ol’ add-on. I dearly missed the easy pop-up window for modifiers, among other things.

We’ll I guess that’s possible but it would require some extra logic. I can think about it.

Sorry for the long delay… 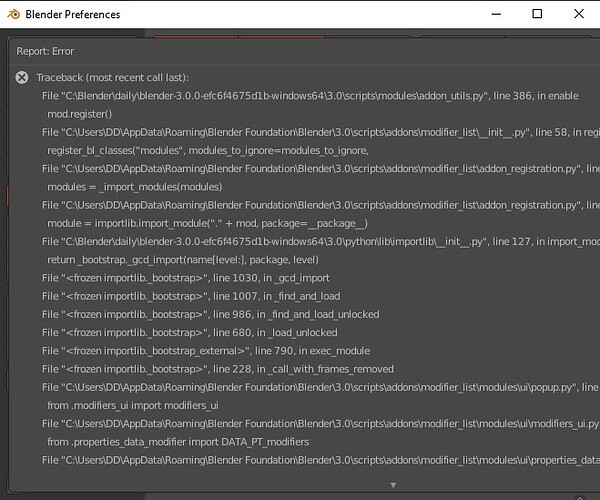 Yep. Can’t get it to work in 3.0, but I fully understand that @Symstract can not be expected to provide support for alpha / beta versions.

Absolutely! Just wanted to make sure it’s not some addons clashing or some sort of user error on my end.

Hugely grateful for this addon, one of my absolute must haves (and the lack of it being the main reason I’m not using 3.0 more frequently at the moment.)

One of those times I regret not being more fluent in coding.

Actually it might have been just an error that came because of the version bump.

Not sure though, I have no idea if there were some changes on modifiers or the API recently.

Yes, it’s because the version number is now shorter (2.93 vs 3.0) and I didn’t take that into account originally. I should update the addon with a fix + new features in master that are currently missing.

Just a patch for now. But I’ve started developing a new minor version which will have the option to use the default stack. I’ll also improve shortcut possibilities. Maybe something else too.

I’ve started developing a new minor version which will have the option to use the default stack. I’ll also improve shortcut possibilities. Maybe something else too.

Blender’s default feature of swapping modifier stacks by drag & drop is not available while this add-on is enabled.

This add-on helps me a lot and I can’t turn it off, but there are many times when I want to swap modifier stacks by drag & drop. Is it possible to implement this feature?

Which version will be good for blender 2.92??

Well, it’s not possible to add drag & drop for the list but using the stack instead of the list will be an option in an upcoming Modifier List version. (Currently I’m waiting for a bug in Blender I’ve reported to get fixed.)