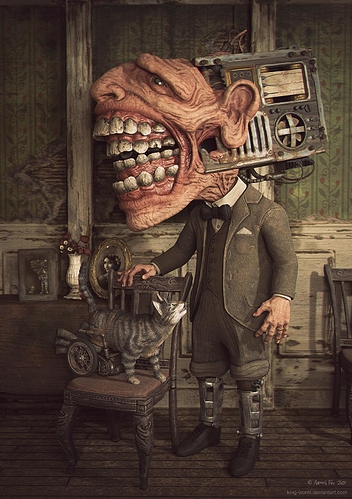 Kinda scared to post this as it’s my first time making a full scene in 3D and my first post on this site. Being somewhat sentimental, I decided to remake the first full piece I made in Photoshop so many years ago (which you can kinda see in one of the picture frames if you look real close).

It’s got it’s share of problems-I relied too heavily on normal maps in areas where I should’ve used geometry, there’s some texture density issues in places… his left hand is just…it didn’t deform as well as I’d hoped, and the colors might be a bit wonky as I found out my monitor’s not calibrated correctly (had to double check everything on my phone and hope for the best)- but I’m still pretty proud of it to say the least :yes:

Technical stuff:
Sculpted, modeled, and most of the texturing done in 2.78 (little bit of PS, about 70/30 ratio). Rendered in 2.79 with Principled shaders, approx 1 hour at 7.1 x 5k at 32 samples with denoising. Color correction and some post effects in PS to try and give it a more ‘vintage’ look.

I love your mind, it is a warped place lol! This would be an awesome short! ! I want to see you make a short now.

Awesome! really nice and detailed, it feels like they are statues and not real, like they are made to go in one of thous miniature houses.

There’s nothing wrong with this, it’s truly great illustration.

Wow I really like that. I especially like that wheelchair cat. Tons of great detail in the background and on all the materials as well. Great job!

Thanks! Haven’t seen much of ‘Little Nightmares,’ but was very impressed with what little I did see. The original piece this is based on was made in '02 so I can safely say it predates the game by a little while

This would be an awesome short! ! I want to see you make a short now.

While there are storyboards floating around of a Mordecai short, I unfortunately don’t really think there’ll ever be one. I’m not a very good animator for one, and second the character was made to only be seen from the side. In this pic he’s just grotesque, but from the front he’s down right hideous!-like, in a bad way.

Yeah, can’t say I’m too pleased on that point, but it kinda reminds me of the old viewfinder pictures, where they’d set up little scenes of dinosaurs fighting and you could look at em all 3D and such, which isn’t too bad I guess. Take what I can get. 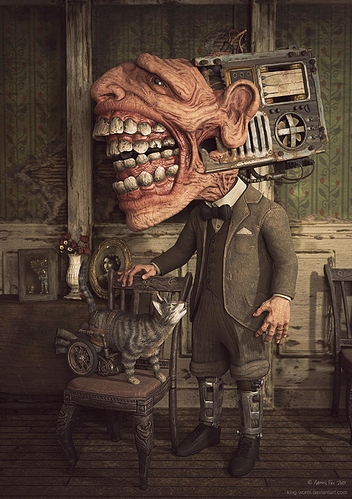