Really awesome project, you are checking so a lot. When you will finish it it will be really awesome.

As usual, besides of modelling I also like to add someting connected with technical and story background… I know, I know… my engineer’s habits and thinking… :evilgrin:

I was wondering recently, how much such ship could weigh? This is rather important, because if this vehicle is planned to start from Earth’s surface…

If we sum weight of all material - this is enormous amount of 166997 tons !!! For example, Saturn V rocket weigh with fuel and everything else was 2790 tons…

What engines we need to lift this weight from Earth’s surface ?

I need to think about this, if class III ship is able to land on planet.
Maybe wings are not required?
Also percentage of futuristic materials used for building this ship should be increased… I like this carbon nanotube idea - http://en.wikipedia.org/wiki/Carbon_nanotube - already mentioned in NASA page as material used for future spacecrafts.

EDIT: I think ship is not fully made of all materials mentioned above. There should be also spaces filled with vacuum and air… But even we assume 30% of ship is without any weight, this is still about 117000 tons…

Hold on… Are you sure that that’s correct?

The reason being is that your ship’s density is 2.05 t/m3 on average.

So for every cubic meter, there would be on average about 2 tons of material. That’s quite a lot.

I recommend that you add air into your set of values. The density of which is around 1.25 kg/m3 (it’s very low, so it will reduce the average ton per cubic meter).

Ok, let’s assume in another way. Let’s take again our famous rocket, Saturn V. According to some information found in Internet, its height is about 100 m and diameter 10 m. Also, weight of rocket is 3038 t (according Wikipedia).

If we assume the same average weight value, we can say that “Morning Star” spaceship’s main body weight should be 24570 tons.

Also, Saturn V first flight was in year 1967. I think in middle of XXI century there should be better, stronger and lighter materials used. This makes spaceship even lighter…

Yeah, that sounds a lot better. 166997 tons seems a lot for a ship that size. Yet your densities are more or less, the same as what I got.

For time being I am really busy at work, staying in office till 5 p.m., and I have not much time for model development. Meanwhile I was thinking about ship types, and see below what I did…

Currently I am not in a state of any war in space, so I did only a classification for civilian ships.

All codes above can change during development. Also, I came up with idea of special class X, which could contain space station, space docks, whatever…

For a dessert, one screenshot from another point of view… I added front wings with four engines for breaking and side maneuvres… 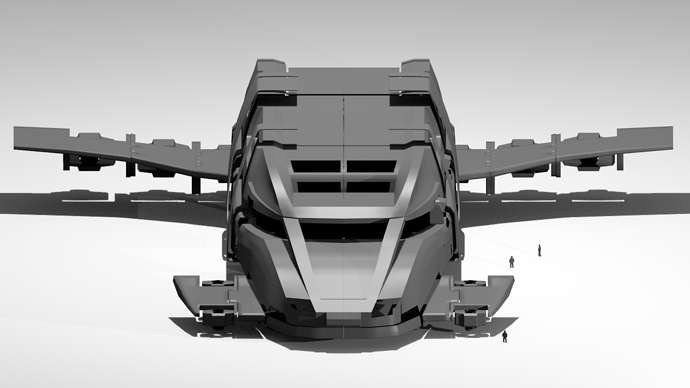 Huge project looking forward to it. Can you post clay render of all stuff you create.

i believe there are various factors which you haven’t taken into account when estimating the weight of your model. firstly, it isn’t a block. what i mean by this, is that only the longest part of your ship is actually 90m. at the shorter areas it probably reaches about 70-80. also, as stated above, a large percentage of the ship is air which, while on earth, would not increase the effective mass of the aircraft. i would knock off at least half of that number.

I know the weight of ship is still overestimated. I rather finished with weight calculations - my general assumption is that 12 engines should be able to lift this junk

I was thinking about clay renders… I have to implement this in my Blender.

Recently I had no time to develop much. Started working with some details of rear engines. 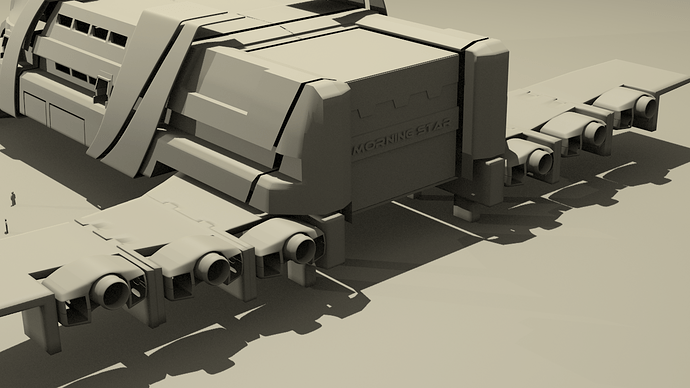 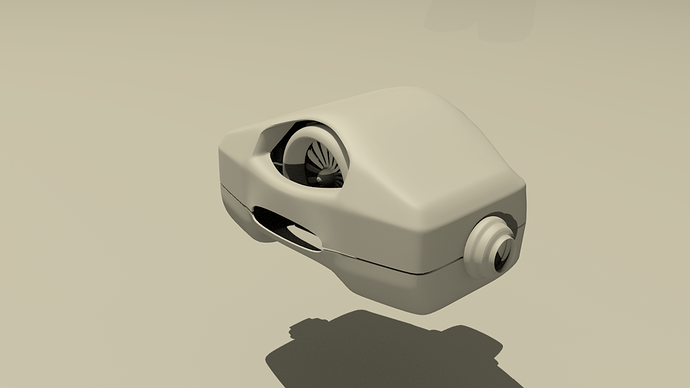 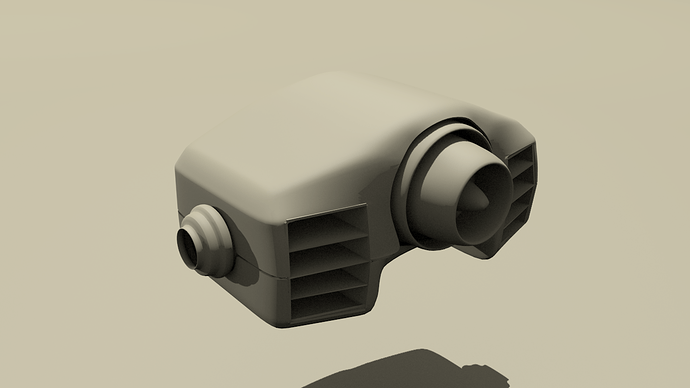 Hey Ushi, cool ship project. I really enjoyed going through all the pics and seeing the ship being built up, deck by deck. It’s almost like watching a documentary of the building of a real starship. And I like that you put man-sized figures in early to show scale. That’s always a good touch, and one that I really need to start doing more of myself.
And I really like your modelling habits. You have a good way of giving everything a believable, “engineered” sort of look.
Keep up the good work, and I look forward to seeing more in the future.
And, by the way, VERY good stuff for someone who considers himself “new to 3D and Blender”!

@AdamEtheredge: Thanks for nice and encouraging words 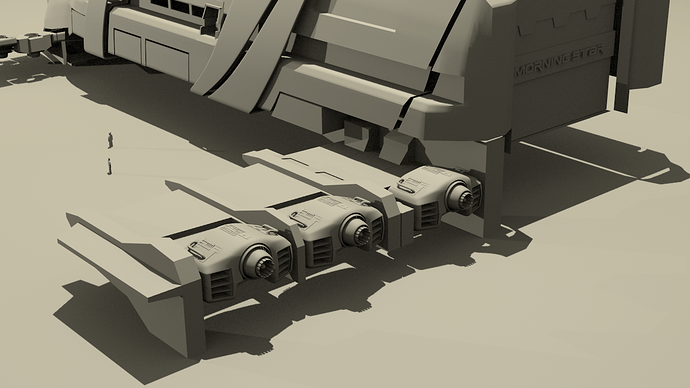 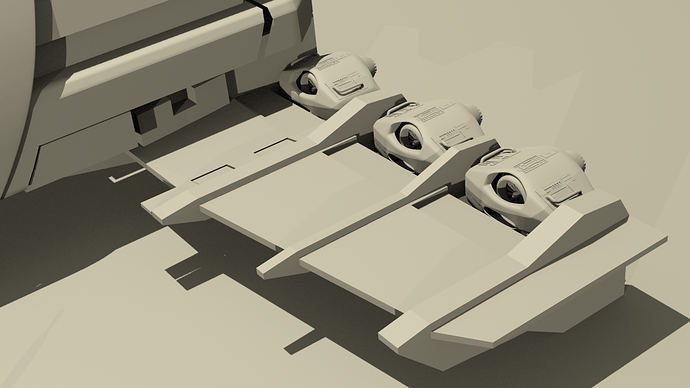 For time being, modeling of rear engines is considered as done. Engines are developed and manufactured by Alpha Star Engines (ASE), one of factories working under corporate consortium. ASE (known also as Air Space Engines

is currently holding some new developed patents and technologies of dual propelled engines, which are working both in atmosphere and space.

As you can see, started development of rear wings. All wings will be able to rotate in vertical position. In this case, some constraints will be required - started playing with that, but I have to learn more to make all movements of engines/wings with satisfactory results.

Still need to develop hinges for wings, as well as flaps on wings.

are u using any reference photo?

@3DUnlimited: For time being, whole design is my own design. Probably I may take some inspirations from other spaceship designs, but I do it unwilingly. I sometimes search thru Internet to find various pictures, which I may use for further detail and various mechanical parts (lifts, landing gear) development. Besides this, I search Internet for various vehicles looking for some solutions and inspirations (for example, www.conceptartworld.com). During modeling of engines I checked some pictures and sections of jet engines to check general structure of such engine.

What I forgot to mention in previous posts and what bothers me now. As anyone can see on previous pictures showing whole ship, airlocks are located in middle deck. I started to think, how they will be used? Height of these airlocks from ground is… let’s say 10-15 metres. For example, on Earth on any spaceport there will be probably any elevator or entrance sleeve, like in airports. There should be rather no problem in space… docking to space station or something. But, if this ship will land on any surface without any additional equipment… how people will leave this ship?

There is huge lift on lower deck… also, ship may be equipped in kind of portable lift/stairs… Another option is to move one of airlocks/entrances to lower deck…

Very cool…looks like you are doing a good job with this. On the comment about strange shadows, etc., you might check to make sure to normalize the faces or if there happen to be some hidden geometry underneath, but it looks like you probably already know that much.

@dvnobles: Any tip or constructive comment is very appreciated

I will check the faces normalization. 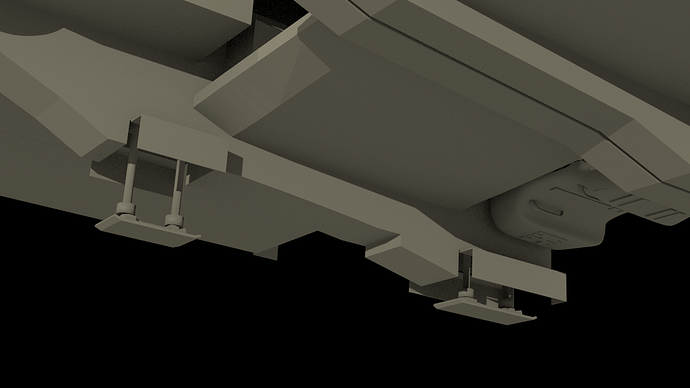 Continued working on rear wings. Next item is landing gear. With assumed weight of ship about 24000 tons, there must be a kind of heavy duty mechanisms installed, which also requires it to be simple.

In Internet I checked hydraulic pistons, which theoretically could take huge forces from spaceship’s body. I assumed 12 pistons (arranged in 6 legs) which will take ship’s weight, which makes about 2000 tons on each piston.

I found calculator for hydraulic pistons, which gives forces for piston and shaft.
For 1.2 m piston diameter, 1.0 m shaft diameter, pressure 600 bars - piston force is about 7000 tons and shaft force is about 2100 tons, more or less.

I think I will give more or less the same diameters for landing gear pistons. I also assume that in future such mechanisms can be much more developed and give better parameters.

Piston calculator gave me also amount of pressurized working fluid - 2.2 cubic meters for piston and 0.7 m3 for shaft. 600 bars is also huge amount of pressure, which will require hell of a pump

But, this is again my pseudo technical arrangements and calculations. :RocknRoll: This way or another landing gear will be quite huge and simple.

EDIT: During further detailing I noticed (it is also visible in picture attached) that opening cover for rear landing gear will interfere with engine rotated down and operating. This will be rather normal engine position during landing, so I have to change the way of operating landing gears.