Hello
Modeling is going well. There are a few anatomical problems that bother me. The belly button is slightly above. I sketched out my suggestions roughly. It’s up to you to do it or not. Stay cool. 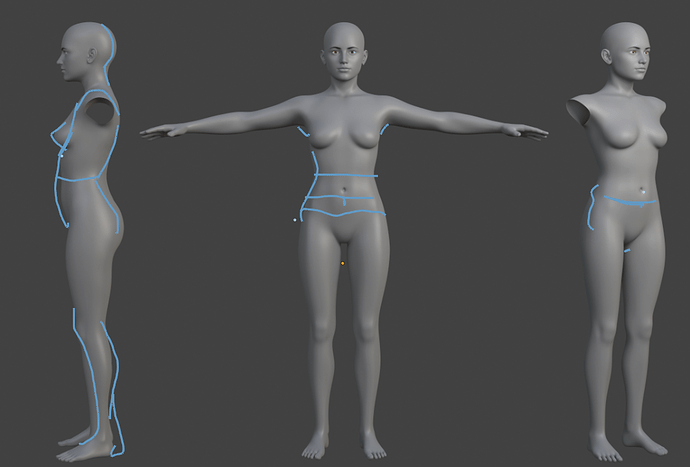 I did say in my original post that critiques or suggestions are welcome. I appreciate you taking the time to do a sketchover regardless of whether I agree with all the suggestions or not.

For anatomical accuracy for an unclothed figure, you’re right about the breasts. However, I should’ve mentioned I’ve kept the breasts fairly rounded intentionally as the figure is meant to be used clothed most of the time, and it’s FAR more convenient to model and cloth sim clothing over a figure who is already shaped like she’s wearing a bra, unless of course the intention is that she’s braless. And in my experience morphs that add nipples on to smooth breasts work so much better than morphs that try to smooth them away, especially if there are ANY other morphs for the chest area that these morphs would need to play along with. That’s been one of my pet peeves with MakeHuman and MB-Lab.

Looking in a mirror, it’s not comfortable to stand in a position that arches my back that much and pushes my stomach out like that. I might tweak the shape of the legs though.

Thank you for your suggestions.

Bodies are hard, I’m out of breath just looking at this!
This is very very good!

Thanks! I’ve had that reaction to more than one of yours.

I’ve implemented some of the suggestions @hopali gave me. 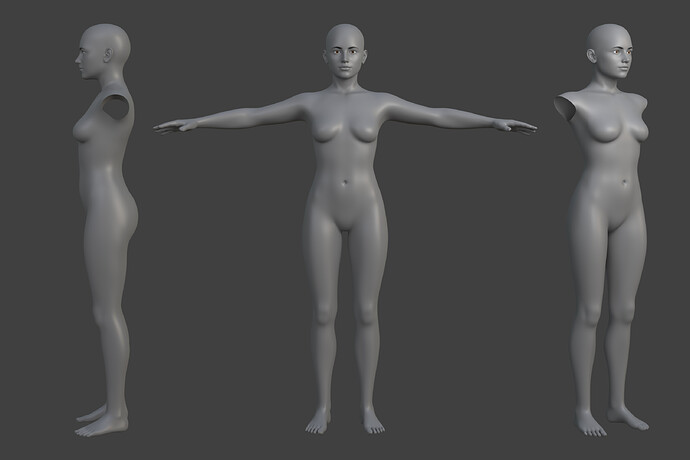 They’re subtle, but they make a difference. For the back of the head, there’s actually a fairly crazy amount of natural human variety there, whether in the volume at the back of the skull, roundness, or the angle where the skull and neck meet. So mine looked alright when I was eyeballing it but when I overlaid a reference in pure ref I liked and tweaked mine to match, I liked the new one with less volume better.

Navel height now matches the Aneta reference images from the Blenderella course. I didn’t use Aneta as my main referrence while modeling (different face and body type), but I have periodically used her to check my proportions.

Adjusting the shin/calves back also made it look more natural. Back arm-shoulder looks better with a little more x-ward volume as well.

While there, I tried a couple other tweaks to the under eye area and nose. The under nose area has been a source of frustration since, well, my first character. Undereye was looking too puffy as well.

Are you going to make this available when you’re done with it?

Are you going to make this available when you’re done with it?

Probably. With the caveat that I’m a slow methodical perfectionist working on this in my free time (and very much still learning), my current plan is to share it when it’s complete. It’s currently unrigged and untextured though, the shapekeys are incomplete and a mess.

No one has commented on it but it’s been driving me crazy, you know those artifacts that appear in the renders on the eyeball? 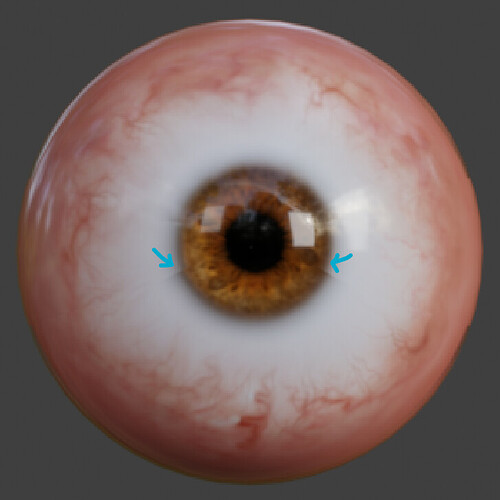 I’ve mostly narrowed down the source. They don’t appear in the viewport, only in the main renders. It’s not the geometry (too bad, that could’ve been fixed), or hidden geometry that shows up in a render but not the viewport (also could’ve fixed). It’s a combination of the refraction shader, and camera location(?). Something camera related at least, as the location/viewing angle seem to be the main differences between the camera that rendered the above, and that rendered the below: 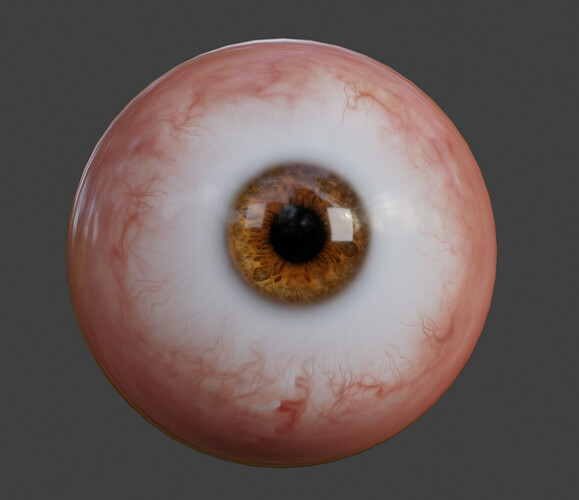 It shows up in two or three cameras in my scene which means even if it’s a rare issue, this is probably something I’ll see more of. The main one where it is obvious is kind of a problem since it’s exactly where it needs to be to get that perfect shot of all three angles at once, and minor adjustments to camera location aren’t helping much. It doesn’t show up on glossy/transparent non-refractive shaders, but the cornea looks stupid as a hollow glass shell in profile view.

I did try creating a hybrid shader that takes care of the worst of it from the front: 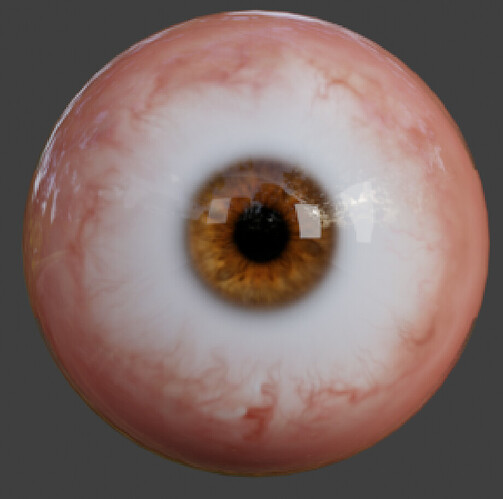 But, I’m not sure I love the effect at the pupil from certain 3/4 angles: 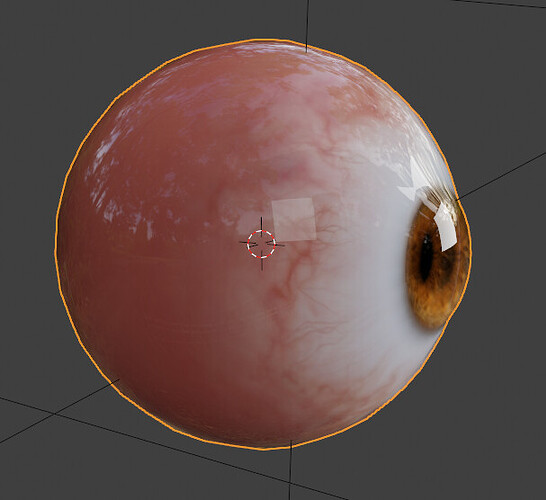 I think my third option is to toss the inner mesh for iris and sclera + outer mesh for cornea eyeball* build completely and use parallax to fake a refractive cornea. I’ve seen it done on youtube so theoretically it might work. That might be going too far though.

(* I know the traditional and “correct” approach these days is an outer mesh that’s sclera + cornea, with inner mesh for the iris, but since I favor Eevee that approach doesn’t work if you want AO to work on the sclera and have a refractive cornea. Checking the Refraction box on a material in Eevee disables AO, and then you get burning white scleras unless you texture it darker. Fun adventure figuring that out).

Ups did i miss something ? Never saw a wireframe of the eye… ??
Anyway: i guess there are mutliple layers of geometry… could it be that this is the cause of this effect because the face edges are at almost the same position? I mean for example slighty rotating one layer may just lead to a differetn ray calculation… another idea: it seems to be that there is no subdiv modifier added and since blender does have this nice adapitve subdivision in the experimential feature set… maybe it’s (in general) an artefact because of he slight transparent material so only this has to be more smooth??

Thanks for the suggestions. I don’t think you missed anything, I didn’t post a wireframe of the eye before. I’m not really sure the best way to show both layers but if it helps: 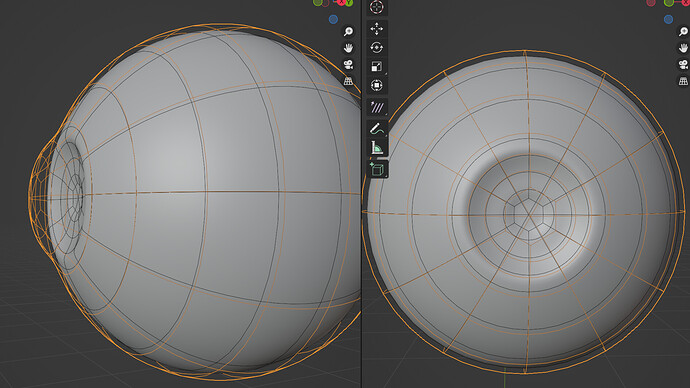 I made the cornea shell comfortably bigger than the eyeball to prevent artifacts related to proximity. There’s about 1mm of size difference And I’ve checked for errors like disconnected geometry, double vertices, or modifiers being enabled or disabled in viewport but set differently in render, as well as face orientation and other normals issues.

I assumed it was intersecting geometry until I started looking for the culprit and discovered the artifact exists even if the scene has no objects other than one eyeball and cornea, no modifiers except subdivision, and disappears if I change shader to one without refraction, or a different camera. If I use 0 to view through the camera in the Viewport in rendered mode the artifact doesn’t exist just rendered (left image is rendered):

It’s also specific to Eevee, not Cycles (forgive the sclera, it’s not optimized for cycles yet): 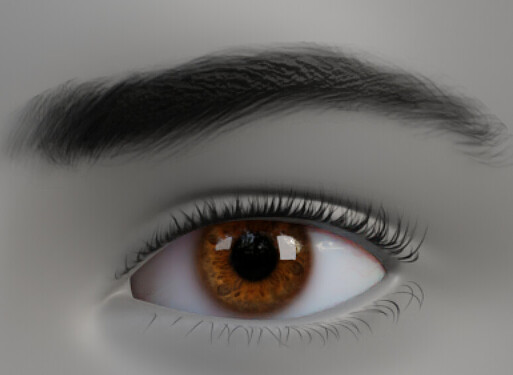 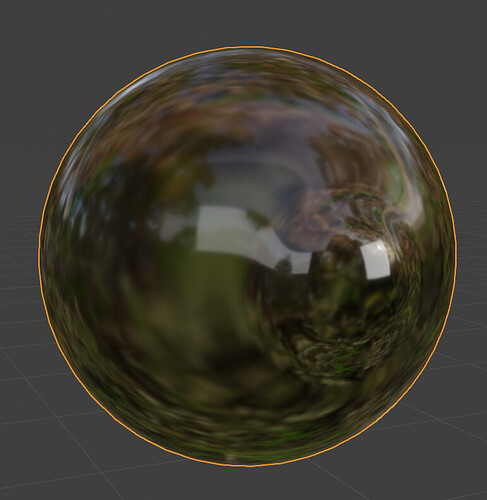 I also ruled out the geometry or weird shader issues by applying a regular glass BSDF over an unaltered sphere the same size and location as the cornea model and got the same exact artifact. As far as I can tell, it is genuinely just an issue with screen space refraction from a specific viewing angles or distances or something, and specifically during render.

Which, admittedly makes less sense than your much more sensible suggestions or the other things I thought it could be, but those seem to be the only things that effect it.

can you show topo of the head ?
is it following the head’s shape ?

will you do same for a man character?

will you use real hairs or fake ones ?

can you show topo of the head ?
is it following the head’s shape ?

Sure thing, here’s the face wireframes for the male and female bases:

Recently learned about the magic button to render out of the viewport without using workbench. Can’t promise it’s the best topology, but it follows the traditional principles to the best of my knowledge, so it should animate well - in theory at least.

I may change my mind, but hair will probably be cards for the eyelashes, textures for the eyebrows - probably not the ones you see in my earlier renders, those are very much placeholders. Nothing ruins a good looking character like badly done particle hair. I haven’t been super impressed with the results I’ve been able to get with particles.

I’ve been considering giving eyelashes another go when the new hair system is added though.

As for actual hair on the head, that will definitely remain hair cards for the foreseeable future. Haven’t gotten great results yet, but I’ve done some with enough promise I’m a lot closer to the quality I’m looking for with hair cards than particle hair. Easier to edit too.

keep it up - nice work here 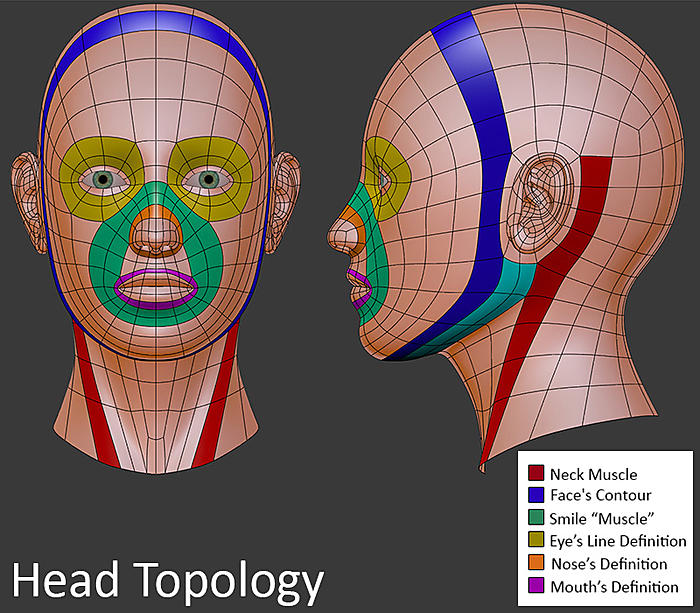 Thanks. Yeah, characters are hard. Trust me my first head didn’t look nearly this good, I’m sure with time you’ll get there. It may be easier if you start by trying to follow a tutorial rather than starting out by trying to box model the whole head from scratch.

I’m not quite ready to share my meshes yet. They still have a lot of baggage from development and need some cleanup. Hoping to get there soon.

I’m familiar with that image, but it’s not one I referenced while modeling as it’s not really one of my preferred references. There’s just some odd topology decisions, particularly around the mouth/upper lip and chin areas, and the model isn’t shaped well.

For my referrences, I mostly relied on the Blenderella model tutorials, combined with Dikko’s tutorials and CG Cookie’s videos on modeling humans and topology, as well as a folder of topology referrences from various sources, that has a couple dozen images in it.

can you give then the different links

Ponder Studios’ Blenderella tutorial series is now available on youtube (I’d put it on x0.25 speed during the timelapses because they’re FAST and it’s hard to follow). CGCookie’s female character modeling series isn’t in a neat little playlist but I think it might be easier to follow, there’s also a face topology breakdown here. You can find both of Dikko’s tutorial series here, and there’s also this series by Tomcat , which I’ve seen people get good results doing.

Watching FlyCat’s timelapse videos can be educational too - and this one is all poly modeling.

I’ve adjusted all the faces after checking them against some more references, and now I’m going to stop tweaking the faces. At some point I’m just putting off the rigging because I have avoidance issues. 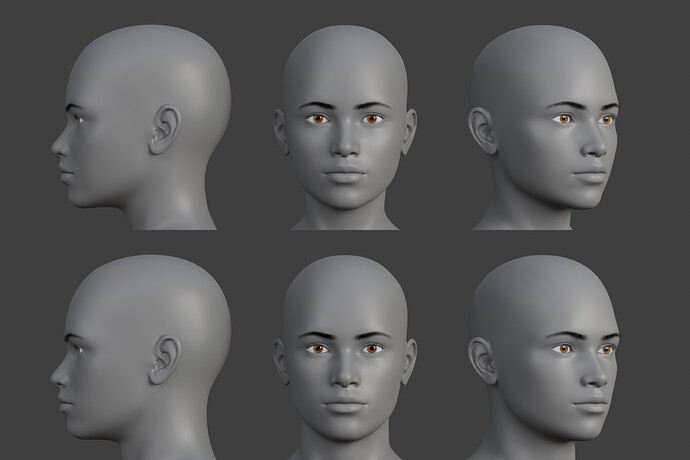 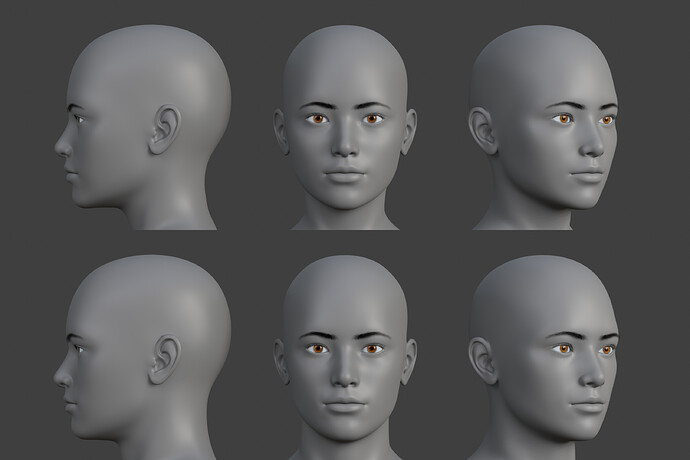 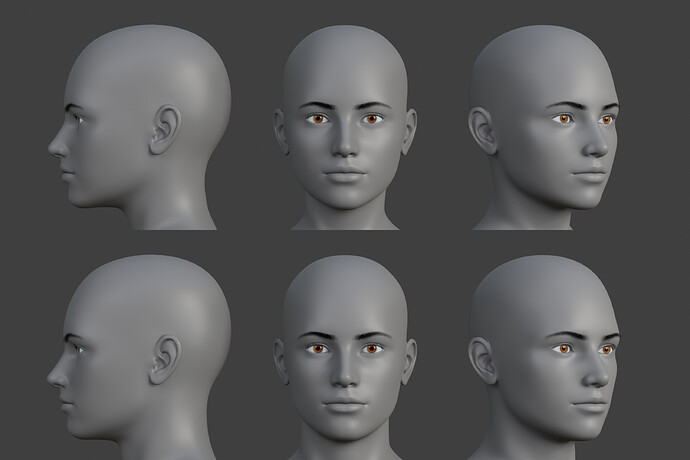 At some point I’m just putting off the rigging because I have avoidance issues.

If that isn’t the most relatable thing

Some initial rigging with a basic FK armature. I forgot how much I hate posing in pure FK - really missed my control rig. All of this is without “preserve volume”, corrective smooth, or corrective shapekeys. I want to avoid the first two so the rig can exist in a roughly software-agnostic state, and the last because for now I want to see how far I can push the rig without them. (No fingers/hand bones yet) 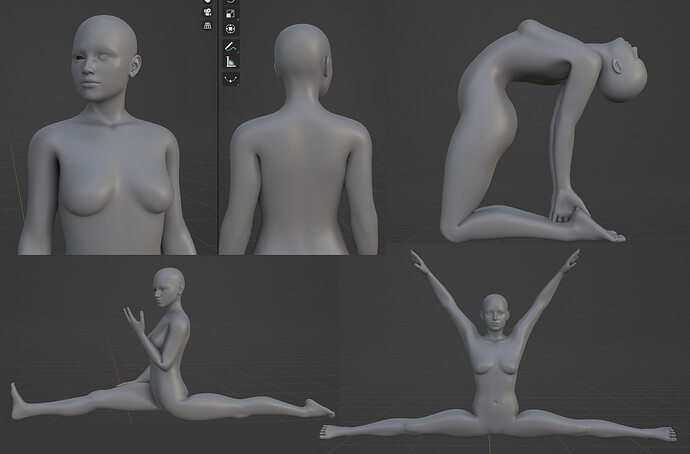 Overall, I’m pretty happy with how well it handles fairly extreme poses. Elbows, knees, and shoulders look pretty good, hips are probably about as good as they can be without corrective shapekeys, the spine… Needs work. Looks okay in this pic, which is why I picked it.