Here is my Mountain bike model that I have been working on now for a while. I am trying to get as close to a photo realistic render as possible, this is what I have so far. Looks really good so far. Is it just me or does it look orthographic for some reason? It feels like the depth is missing, and I cant tell why.

Ya, is this an orthographic render? Because the way the bike is positioned the back tire should be smaller then the front ya?

yes this is an Orthographic render 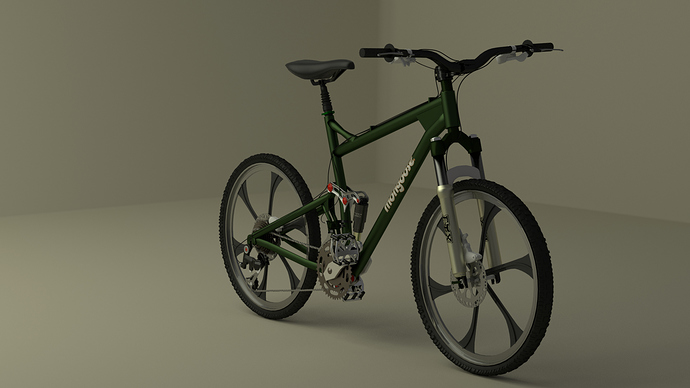 I feel compelled to say that I couldn’t do this well before critiquing. Ok. (I think) The gears should look more metallic, and you should light it up a bit more near the front, I can’t see the details on the handlebars. For the metallic look, I think you could use toon shading somehow. And the handlebars might be dark on purpose (so we don’t see the lack of detail, or just because you want it that way.)

Overall I’d say you have achieved a very high level of realism in that the proportions and detail seem pretty spot on. I think the image should be a bit brighter though and I’d like to see the room environment closer to white so that the bike will ‘pop’ a little more out of the image.

The textures on the seat, the rims, and the frame could use some improvement. The seat looks especially flat and the rims don’t seem to be as defined or as chrome like as they should. As for the frame try increasing the specularity a bit maybe? The tires are excellent and the shocks and handle bars are also particularly good. Well done as a whole though, I’d say.

For materials, i’m not sure does painted alluminium looks like that, maybe it’s the lighting of the scene. I would also change lightening a bit because the handlebar is too dark

For more realism i would kinda “scratch” the bike. Add some scratches or dirt.
Nothing in real life comes as perfect as on renders.
Breakes have no materials i think.
Some parts looks veeery flat and with to much gloss(?).
But I dont know if they looks like that in real life.

Your modeling skills look really good. You should try to ad some welds or brazing like the other poster said. You definitely have the skills to do so. For photoreal renders, the devil is in the details, so you will need to have some sort of connection between the tubes on your frame, and wherever else your reference bikes have them.

I use CGtextures, and the normalmap addon to GIMP, to get some very realistic textures on my renders. I bet that is your next step to get a photoreal model. Well placed scratches, dirt, and dust will also do wonders for an image, like gadjung said.

The last step (I think), would be to try to match the lighting of a photo you want to insert your bike into, because it will look really funny if the lighting is different for your bike than the rest of the image.

P.S. If any more experienced people out there think I’m wrong, please tell me so. I’ve only been modeling for CG for a fairly short time. Almost all of my work is commissioned, so I would like to think I know at least enough to help out.

Look into a tutorial on six or nine point lighting, no sense in spending hours on a model and only a couple minutes on the lighting. Do your model some justice

At this point, "yes, it definitely looks like a mountain bike to me, but nothing in the presentation makes me “lust to buy it” …

… which of course is the true objective of all advertising photography.

For the most part, “lust to buy it” is all about chrome. Subtleties of lighting and shadow, and especially of specular lighting effects. It is a discipline around which photographers still specialize, and there are plenty of excellent books available about it.

“Pure Sex in a Reflection” is the way that a photographer friend of mine once put it. (He, to this day, still specializes(!) in the now-digital photography of $25,000+(!! !! !!) chrome-drenched objects. (“Rich-boy boy toys,” he calls ‘em.) Yup, he’s doin’ quite well by those “reflections” … and just in case you’re wonderin’, there is absolutely nothing pornographic about them. Just absolutely-irresistible photographs of very expensive machines.

It’s a really fine line, but well worth trying to cross. If you simply depict “a bicycle,” then my or anyone’s reaction will naturally be, “wow, that’s a really detailed model.” Whereas, if you do manage to cross that line, you will sell the bike, and do it in such a way that the very-happy(!) buyer will decide that money is no object at all.