How do work the famous “Mouselook”
script used in most blender games ?

first of all, here are The basics of MouseLook :

The MouseLook script first involve, of course, the mouse !

simple : while in-game, when you move your mouse, it’s actually really moving
the mouse right in front of you. You just can’t see it cuz it’s hidden by default.

Thus, during 1/60 second, you can actually move your mouse from a few pixels.
If you do so, during the next “game engine computation” = after about 1/60 seconds,
the mouselook script will look at your mouse’s position and say :

And that’s exactly how every single mouselook of the entire community works (AFAIK)
They just use different syntax and differents way of codeing it.
but OVERALL, they’re pretty much all the same.

K, now you probably want to know how the heck you code this hein ?
Well here we go :

This “0.5” step isn’t really a step since it’s only there
to put the mouse in the middle of the screen the first time the script run.

(SO that your screen doesn’t jerk or so.)
(Delete that part of code and you’ll quickly see why it’s quite required

The associated code is :

This is the common initialization of a script. It is the way
to include the sensors/actuator/owner object/properties into your code 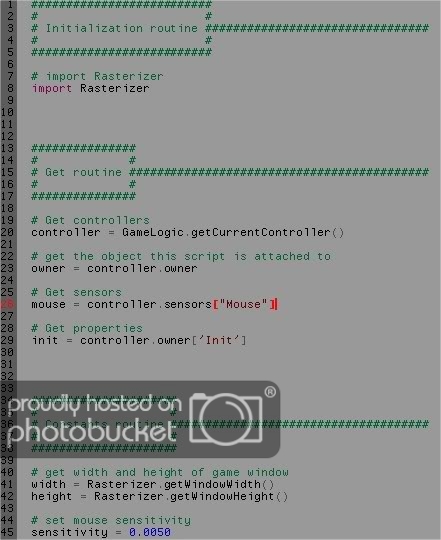 Notice we import the “Rasterizer” module. (At line 8 )
This is to be able to use the mouses related functions
(to get the mouse position in our case and to stick it at the middle of the screen)

The above script will need the following setup (At least) to work
Because if it can’t find a property/sensor/actuator it’s looking for,
the script will crash in your face.

Notice that, in this script, we also set the “Mouse sensitivity”.
This is the constant used to reduce the rotation (In number of pixels)
gathered from the mouse’s position into a realistic amount of rotation.

The related function :
(Note that it’s where the “init script” is contained.) 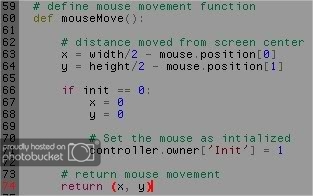 The lines 89 & 90 calculate the x & z rotation from the informations
stored into the “move” variable and with the mouse sensitivity.

Here is the quite simple script who take care of this :

For more info, you can alway look into the API for the “applyRotation” function.
It’s really simple as you can see.

I would only specify that we use the prefix “owner.parent” for the Z axis’s rotation
instead of the common “owner” relating to the fact that, in the code, the owner is
actually the camera and it’s parent is the player. Thus, the player only
rotate to left and right (Z axis) and the camera rotate up-down (X axis).

my own code is pretty much the exact
same as this except that it “CAP” the camera.

& there’s a tricky setup so that the camera move smoothly.

Well I can almost get it to work, is just that i can’t which is bothering. Where to put the first lines of code?(the if == init)
EDIT: i realised where to put the code, but it is still not working.

give me your blend file and il take a look

great tut, now if only i could figure out how to limit the camrea rotation, im still a noob at python

…but don’t go too far in it,
In blender game, you wont probably need to use advanced
pythons capabilities like classes or stuff like that.
…you can use them, but there’s 21342134512345 others
solutions that are usually more efficient anyway (AFAIK)

Ha ha, “thats exactly how every single mouse look of the entire comunity works”? I know I’ve set up a mouse look system differently than that!

what is the matter with it ? , tell me how to fix it please ?

I’m honoured you ask me a question 3DGURU

your problem is relating to the fact that the script is
looking for it’s parent to rotate it on the Z axis.
thus, to correct the problem, you have 2 options :

I’d lov to have a look at your script to see how different
is it’s technique used to “mouselook” :yes:

if you’re not to shy to give me a VIP look of course.

i made this one. but here is mistake. becouse python says here are many problems. i dont know python enought to find out the problem. i remade this my self. but its not good for me…

mansim , open your script and click on the button I highlighted

yea, that could help a lot