my name is Nolo. I’m from Frankfurt, Germany.
I’m planning on doing a movie - an animated feature film. I will send it to Cannes Film Festival next year.
The movie is a photographic stop motion collage with different animated elements from various genres (like drawn animation, puppets, stop-motion and 3D-animation…)

The protagonist is a little metal chicken - and it should be 3D-rendered. I started working with Blender but I have alot to do with the rest of the organisation and also University and I dont have the feeling that I am able to create a chicken and animate it in a few weeks. So I am asking for help.

I’m already finished with the script (more or less, its the 3rd draft and needs some work, but next week everything should be fine) and am currently making and collecting photos, casting etc etc.

If you want to know more about the story/script and/or the characters, tell me.

The movie is in English (and a few other languages, but mainly English), the script in German. But I’ll write you a summary if you want.

Now, for my request:
I’m searching for an artist who will create a metal chicken with Blender (or some other software) and animate it (walking, running etc). I need some face-expressions like laughing, crying, angry etc.

The Chicken should look like a real chicken, no cartoon style here. But since its made out of metal, its not totally realistic

some pictures (its not a grown chicken, its small, but not as small as a new born chick, so here are both, we have to merge those two exremes):

the look should be cute but not cartoony…

well, we can discuss the details if someone wants to make this for me.

I’ll thank you by putting your name in the credits and the intro-sequence. I hope to get into the competition in Cannes, so when I’m in you’re in too
8)

Thanks in advance, hope to hear from you!

It seems as if nobody is interested… That’s sad…

Does anybody know of another forum where I could propose my question?

…hmm, I read your post and it looks like if you are looking for somebody who does ALL the 3D work for you.

I think most 3D artists that are able to handle a project like this prefer to visualise their own ideas. This might not be the best approach

(most of the time it’s a good story/concept that’s missing) but it is a huge amount of work/time you spend on actually producing this and so most people work on their own stuff - I guess that’s why nobody replied.

Good luck with your project, Nolo.

…hmm, I read your post and it looks like if you are looking for somebody who does ALL the 3D work for you.

I think most 3D artists that are able to handle a project like this prefer to visualise their own ideas. This might not be the best approach

(most of the time it’s a good story/concept that’s missing) but it is a huge amount of work/time you spend on actually producing this and so most people work on their own stuff - I guess that’s why nobody replied.

Good luck with your project, Nolo.

mh, thanks for the nice reply and the info. you are right, I think.

But maybe I didnt make myself clear enough. I would need someone who models and animates a chicken for me. Then I’ll take the model/file and work it in my movie myself.

another approach: do you know of any chicken-modelling-tutorials? I didnt find any!

and again another approach: could you think of another way to implement a metal chicken? not a 3d-animated, but something totally different…

thanks for any help!

I played around with your images and modelled something up. Is this to you liking.

WOW COOL! I’m amazed that someone is interested!! Thanks!

It’s a good beginning, but let me give you an exposé of the film so you can better imagine what I have on my mind:

It is a story about a cute little metal chicken that isn’t accepted by its surroundings. After many bad experiences with different kind of people the Chicken hears of Bucketheadland – a place where people are accepted as they are, a place where all your dreams and nightmares come true; a real utopia. So it decides to go to Bucketheadland. On its journey the Chicken meets a lot of characters and goes through a lot of adventures.
It has alot of social-critical messages, so dont think this is all.

So about your model: It should be much smaller and have less (smaller or no) cockscomb on its head. More like the hen on my “plan” I posted. Also, since its a metal chicken it doesnt need to be smoothed out.

I’m glad you’re interested. So, does that mean that you’ll work with me?

It has taken a while to model so far, and given my handle… i thought
modeling a chicken was appropriate.

Have you got some of the work to show. which might inspire me
an update

ok, cool. It’s getting better. But before we’re going on, let’s get an image together. I cant give you any work of the movie since its not started. But anyway, its a photo-collage, so it doesnt have to do with any 3d-design. here’s an example 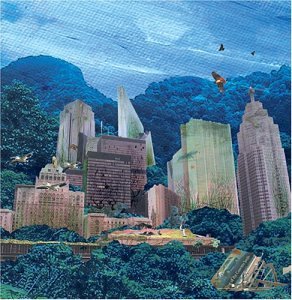 okay, on to the chicken look. here are a few pics I found that I have the feeling contribute to the look:

this is a bit cartoony, but it resembles the cute style I want. Although the pic is small it also gives an idea of the size of the chicken. its a newborn, but not a fledgling, but something inbetween.
I modified this image a bit.

and here a quick metal version:

its just B/W but look at the different shades. the chicken doesnt have to be very detailed…

here are a few photos of real chickens for inspiration:

since I cant find any chicken robot pics, I’m just posting some robot-pictures that give you an idea of how “robotic” the chicken should look like:

here’s a toy robot. the chicken would be without colors (except the eyes, they should be blue), and the metal should be smoother (other texture):


here are the infamous japanese robot dogs. now ignore the head, but look at the legs and the belly. it should be visible by lines and edges that the chicken is out of metal, a robot: and another metal bird for inspiration:

do you have an idea?
do you have a messenger-name? AIM? Msn? ICQ? Yahoo?
Here are my names:
AIM: LingGanJianZhi
MSN: CrCoLGJZ
ICQ: 171747771
Yahoo: TheCreativeControl

although i will have a go…

so u want a cute robot chicken is that possible, oh well back to the drawing board…

how much does this job pay again.

although i will have a go…

so u want a cute robot chicken is that possible, oh well back to the drawing board…

how much does this job pay again.

How much time did you spend on the two models? I think they’re very good - if I wouldnt have something different on my mind, I would have taken them. You’re very talented I think! I wish I could do all this so quickly… well one day I hopefully will… I’m working on my skills.

unfortunately the job pays nothing but kudos and prestige. I’m a student and try to get this project done with as less money as possible. I already bought an animation-software and will spend some more money on other things, but not the artists. You see, if this movie becomes succesful (dreaming, dreaming) - and I’m not just dreaming here, since it’s something we never saw before, literally (want an explanation?) - this is good for everyone.

I will start a website/webblog about the movie and the process very soon. Of course every tidbit will be shown off - including your work.

if I can help with the chicken, tell me
more pics? or shall I draw a prototype?