Inspired by Andrew Price pot cast and his joke about the man who has not the time to do it the right way, I thought a lot what this right way could be for me, filling my 3D passion with the greatest possible intelligence.

In my working history has a 2D/3D editor from 1990 I experienced DOS, Mac OS 6 to 10, Windows 3.1 and UNIX with softimage.
After my coma in 2008 I only could afford the real essentials for a basic workstation. I bought a cheap fast ASUS PC.
Since I found out that Windows is not the best platform and UNIX is simply brilliant for me I installed ubuntu on a dualboot and found out that I could do quite satisfying things with the ubuntu side with blender of my Windows/ubuntu of my dual boot:
[video]www.youtube.com/watch?v=N3noUNzPJ7sA[/video]
(of course the focus of the production lies on the audio side and skibbe’s music, but I experimented with sound animated function curves, real footage, the video editor, compositor and all that good stuff.)

Sad story old story: for my sweet USB sound interface line6 KB 37 with her sweet analog level meters, my sweet condensator microphone and my Windows licenses for 3D coat, fruity loops studio, Dragon NaturallySpeaking and so on I was forced to boot from Windows most of the time.

Now I try to do it the right way. And I want to share my investigations with you.
Since I prefer to follow the thoughts of scientists than to be stuck between the jumping ideas of the marketing experts, I’m quite glad that the open source community gave us free access to virtual box, ubuntu and blender. 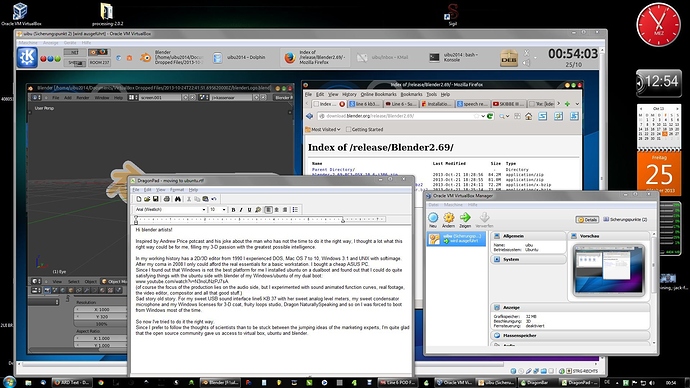 So here you see a snapshot from ubuntu running with blender and Firefox in virtual box while I am dictating this a on Windows7.

Pretty wired constellation. The host PC in the Dragon window of NaturallySpeaking. It is so relaxing that I now only have to switch to Windows for RAM intense work. And of course a hungry application like blender runs with a nasty delay on a virtualbox. But things like online access and software installation run smooth under virtualbox if it is installed.

So the next big step will be to try to slave Windows via virtual box to ubuntu and learn if it’s possible to run my licensed Windows software and USB sound card with wine or something like that with full process power. And I want to get into the ubuntu speech recognition software sphinx. As I said I am very grateful for any kind of help or comments of blender artists who chose a similar way.

Hello.
Did you install Kubuntu? Or do you have installed Ubuntu and then KDE in Ubuntu?

I do not think a virtual machine is optimal to use programs that use intensively the video hardware such as Blender, in a guest system. In a virtual machine, the graphics hardware is emulated and you do not have real access to the hardware.
If you create a Windows virtual machine on Ubuntu, maybe you can share the USB device and install the drivers in Windows to have real access to the hardware. Perhaps Audio programs would work well that way. But regarding 3D programs in a Windows guest I think you will not have good performance as I previously said.

Regarding speech recognition, I really do not know much about it. I know KDE officially added the “Simon” project:
http://userbase.kde.org/Simon

Thanks for your support.
You are right, the simulated graphic card is no solution. Blender flashes and that is the least.

I will check Simon intensively as soon as I have slaved my now running Win7 as an ISO or similar to a root Linux.
Because reinstalling all those little .exe helpers is no option.
On virtualbox(VB) its ubuntu+KDE, on dualboot it is kubuntu. The dualboot kubuntu partition became to small with all the stuff i tested.
I will have to bury it

So what I aim for now (high hopes)

At first it sounds more complicated than it is, and I am half way there already. but then it is quite hard to google at least parts of the full solution. http://superuser.com/questions/tagged/dual-boot The only thing I found is that you have to be careful when you try something like this, you have to avoid fatal loop errors. A linuxVB already runs under the ubuntu from still native WinVB. Well, i bet it would be simple for the average WebAdmin, 2 Ten minute Sessions on remote login, but for me it is quite a challenge.

I found out it is not practical to reboot one side of a dualboot every time you have to check something on the other side. It slows you down til you give up.
So first I want to get managed to “loop” a clone of my existing Win7 with the ubuntu VB on Win7.
And get behind the secrets of wine, if I could use my 3D-coat and my fruity loop on a native Linux driven processors.

All that with the good feeling that when it is finally done I work on a system that is sophisticated and free breathing.

“They present convenience rather than freedom as their goal”
Richard Stallman (http://www.youtube.com/watch?v=CP8CNp-vksc)

My goodness. on my way to do the right way, following the device of Andrew Price, I almost couldn’t touch Blender for a month. Except for little architectural work for a friend that I have to render with a variate roof in high resolution. That worked very very smoothly with the Linux Blender.

So I almost finished my “moving to ubuntu” to find out an ugly truth about Canonical’s ubuntu.
I have to say the title of this thread I chose was not precise enough. Should have called it “moving to unix”.
Back in the day 1999 I worked parallel on UNIX/iricks, Apple Macintosh and windows(NT): 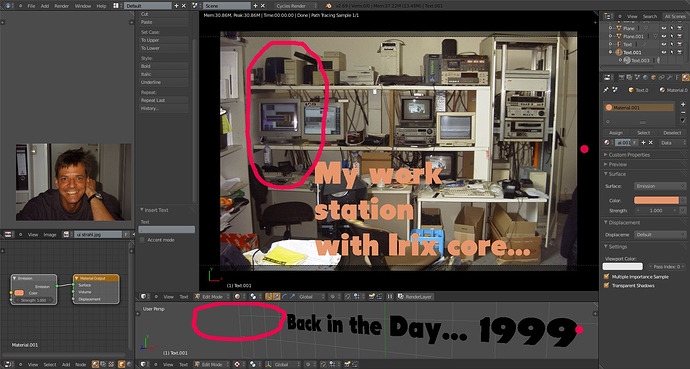 And as I said the Unix command line structure with a little bit of fancy Desktop OS work was the most effective way how to handle these tricky animations. You can see results of that time on my YT.

It’s an endless adventure for a digital freak like me to have this modern 21st century unix around.

Guess what… Exactly for that reason I was thrown out of the world of Mr Jobs and Mr Gates. And Adobe, aunt Autodesk and Maxxon. Unfortunately also from fruity loops and 3D-Coat since they don’t have this money structure through and through.

But there is hope and some lovers of truth guided me to Linux Manjaro.
http://www.youtube.com/watch?v=C3s7qw1Zoow
So if I get any feedback to this, I would love to report my investigations with my free professional solution with blender running on Unix. As I was amazed by all the beautiful videos from the blender conference.
So that this stops to be no country for old artists.

I decided to install ubuntu once. and never again… it erased the whole C: partition (including windows) and the mouse didn’t work… but I really like the overall visual design… unfortunately the rest is crap…

I am a Unix Administrator in my work life, running various flavors of UNIX and LINUX on various hardware profiles. I, too, investigated doing a LINUX box, even blew up a Windows 8 partition trying to get to get it working the way I wanted.

My advice is, build a different, cheap machine. LINUX seems to run better on the “cheaper” hardware, because it’s a bit older.

Right now, I’m investigating the Raspberry technology for this type of use. What I want to do is setup a render farm, so that I can toss rendering to my network and let it go. I just have to get the right set of things working. First step…find a raspberry

I decided to install ubuntu once. and never again… it erased the whole C: partition (including windows) and the mouse didn’t work… but I really like the overall visual design… unfortunately the rest is crap…

Yeah mostly it are quite simple things (like mouse or network) that keep you away from unix.
In 1994 hi simply had no other choice because there was that cute softimage 3d software running on Silicon Graphics iris and irix, a unix distribution. And I found that it is beautiful system when you know some secrets because there were always close deadlines. I mean also the Nasa works with it.

I am a Unix Administrator in my work life, running various flavors of UNIX and LINUX on various hardware profiles. I, too, investigated doing a LINUX box, even blew up a Windows 8 partition trying to get to get it working the way I wanted.

My advice is, build a different, cheap machine. LINUX seems to run better on the “cheaper” hardware, because it’s a bit older.

Right now, I’m investigating the Raspberry technology for this type of use. What I want to do is setup a render farm, so that I can toss rendering to my network and let it go. I just have to get the right set of things working. First step…find a raspberry

Sounds like a great idea. A powerful render farm almost in your pocket.
I cannot confirm, that this Debian Linux i run on my 7-core Intel Asus computer is any slower than the rancid Windows 7. They boot in the same time and I got the impression that blender even starts faster on Linux. Also the NVIDIA graphic card works great with Blender, there are still only some solvable issues left with a “tearing screen bug” while watching YouTube videos or so.
My SSD hard drive was recognized and supported instantly. So I’m quite happy that at least these things run smoothly.

m_squared > when did u try that? I have always been asked what I wanted to do with the existing OS (Windows just doesn’t see Ubuntu or other OS). I can build partitions to install Ubuntu alongside Windows. Do the opposite and Windows will erase the MBR and you won’t see your Ubuntu install anymore.

I have switched to Ubuntu 4 years ago, ditch 3dsmax and Photoshop in favour of Blender and Gimp and never looked back.

ulliroyal > I have skimmed thru your explanations so I may be out of the line but I wonder why you don’t just run Ubuntu and have Win7 in a VM so you could use software you paid for.

ulliroyal > I have skimmed thru your explanations so I may be out of the line but I wonder why you don’t just run Ubuntu and have Win7 in a VM so you could use software you paid for.

Well I would have needed windows to run fruity loops, brilliant audio software, on VirtualBox. That won’t work because you need more than virtual power to get a professional sound. But since my main focus is not music I can do without that. Actually I found out that I don’t need to go back to Windows … for anything. In my opinion the Future talks Blender anyway.

And about ubuntu you really should listen closely to the kind but clear words of the the GNU Linux Guru Richard Stallman himself: http://www.youtube.com/watch?v=CP8CNp-vksc

That piece of code resides in Unity if I understand correctly. Good thing I ditched that minutes after installing Ubuntu.

Thanks for the link, it was interesting!