Moving up and down an incline

I’ve attached my settings (some of these were derived from some forum searching I did earlier). What I’m moving is a tall cube. It moves uphill okay, unless the character’s running – in that case, he floats in the air for a moment once he’s on level ground. When going downhill, he completely ignores the slope and just floats above it. He’s pulled down really slowly, too. I know it has something to do with the gravity and/or mass setting(s). I’m using standard gravity. Help would be greatly appreciated. Thank you! 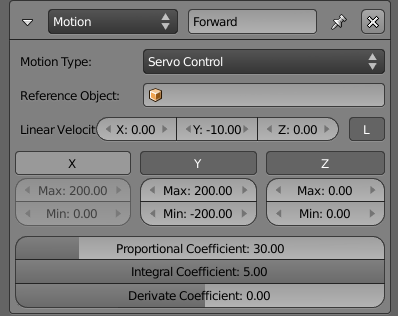 This is because you have set a linear velocity that is horizontal only. What you should know is, that there is a difference between velocity and speed. Velocity is the speed in a certain direction. Since you have put a speed of 10 in y-direction only it will also move in y-direction (horizontally) only and therefore makes a step into the air. What you need however is to fit the speed to the incline of the hill. First you need to get the incline and direction of the character walking, afterwards you must determine the new direction and apply the speed there. This will only work via scripting though.
I am currently working on the same problem, but any possible solution I found resulted in at least 10 new oher annoying problems.

You can do however a dirty quickfix (which I don’t recommend) which is to apply a constant -Z linear velocity e.g. -2 (on SimpleMotion/linV actuator, not Servo Control). This forces the character being hold on the ground even when walking downwards.

If your object falls down very slowly check what your damp value is for the objecttype. It should not be higher than 0.2.

tutorialsforblender3d.com has a tutorial for movement using servo’s using either logic bricks or scripting. They work great. I have not had any problem with either method.

tutorialsforblender3d.com has a tutorial for movement using servo’s using either logic bricks or scripting. They work great. I have not had any problem with either method.

Thank you. I’ve been using tutorialsforblender3d.com a lot. I was using their logic bricks method, but the Python script method seems to be working better. It’s still not perfect, but I’ll just have to play with it a bit.

I’ve found a few that come close, still work to do though. I’m trying myself at the moment, but still cannot completely stop sliding (even using limits, damp and some friction), then when I get close to stopping it some other problem occurs as a result. Might try using applyMovement instead.

How has movement scripted in Yo Frankie?