This is a WIP Mp5A4 Navy Model.

looks good, still a little jagged. Can we see some other views?

Looking good, the lamp and muzzle need a bit of work, but I bet you know that already…btw I hate that gun in BF2

Pretty much a finished prodect.

I love this gun, I have the airsoft version

I personally think that this gun is far from done, I am pretty much going to rip this model apart so please dont get offended or anything. My recomendation is to start over without the subsurf. The foregrip is wrong, you dont have the diagonal line that defines the flat part and the curve. Actually the part higher up on the foregrip slightly angles in towards the gun. Yours looks like it is a cylender, and it shouldnt be.The muzzle flash hider is a little off and the bump before the muzzle gets to the forgrip should probably be moved forward a bit. And not that much parts of the model have the roundedness that you have on here. The rear sling attachment is missing some parts and is also too rounded.

There is more but pretty much everything is too rounded and in the case of the handle its not rounded enough. Hopefully you will take my advice, because I have been noticing excessive useage of subsurf with people around here. And I have to say that when I realize that everything doesnt have to be subsurfed my models became 2 times better. So just try and make it without subsurf on, and take your time and make it like it is. If there are some parts you need better pics of I can snap some shots for you of my gun, its 1:1 and exact to the real deal.

Ya, i was never really pleased with the foregrip but i didnt know how to go about doing it. Now i think im just going to use a plane and extrude out. Thanks for the tips.

Marui all the way! My dad has the ak that thing has power, I got shot in the head with it on full auto from like 3 ft away…haha friendly fire. We were in a creek and he was behind me and started firing out of the ditch thing. And I poped my head up to see where to shoot and got it in the back of the head…had a headache after and I still cant remember my name…

Ok well since your not sure how to do the grip I attached a wire of an mp5 I did in max. 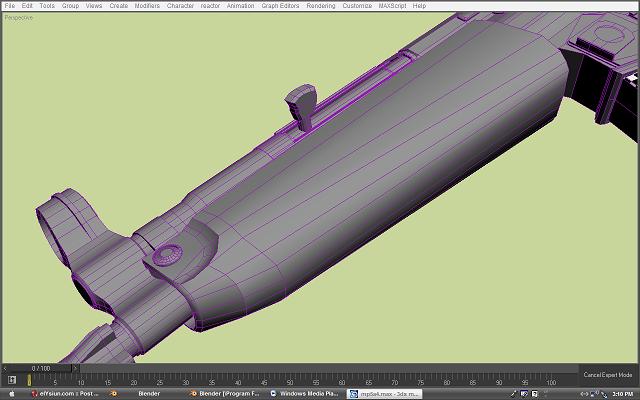 That foregrip looks much better than before but as I said in my first post. I wouuld recomend taking off the sub-d, please just try it at least on the muzzle and you will probably want to redo the whole model once you see how good it can come out.

Trigger guard is too thick

I’ve recently redone an old project (ak47) with subsurf (1 big mesh, except clip of course), although the results were good, it was about 10,000 polys more than it should have been, so i have to agree with themonkey.
lol, now to redo it with no subsurf : \