hey guys, got a idea brewing…just a little multiplayer game made with blender (ogre) and verse, if possible. basically one map, 8 players and a lot of carnage

Plan:
to create a simple, fun, shooting game. 4 vs 4, one team defending, the other attacking.

the game would be 3rd person, im not to keen on 1st person games…

the game would take place on a grassy map, with rivers, trees, rocks etc and one old rundown castle (see screen), players would have to defend the castle while the other team would have to try and take it off them (by killing all players or grabing the flag from castles dungeon’s.

there would only be two weapons for the players to carry around, one shotgun and one machinegun, possibly grenades and smoke, but i dont know how hard that would be to get in the game engine, i.e. physics and SFX.

the other weapons players could use would be static weapons, i.e. high-power rifles, MG60 machine guns etc…

everything would be running in blender, graphics, physics, networking (via verse?), sound, interface…

using the helping hands from the blender forums

just for the fun of seeing are own creations in a game played by 100’s of people, hopefully a lot more.

This project would ask a lot from whoever joins, there would be a lot of work, but i have no date for finishing, its just done when its done. overtime we’ll all get better, faster anyway

also i wont be leading the project, i would possibly have art direction on it…but i suck at team management, 3 projects have failed due to this…so i would need some one who is willing and capable to stand in there and keep things moving.

What i would need:

firstly i would need a team manager, even if you arent to familair with blender or even CG art, but are capable of managing teams and time i would be more than happy to invite you to the team

Texture artists: I need you guys, texture maps make or a break a game, ill need about 2 of you guys. want any more info, PM me

Programmers: Same as the texture artists, you guys are going to make or break the game, im not to sure on how many coders ill need, since i dont know how much we need to programmed for the network, shader, control, speical events etc… if there are coders out there PM me please and we will talk

Sound engineers: ill need one of you guys to get the sound working, might just be guns, enviroment effects, but still realling important since it will add atomsphere to the game.

Animators: ill need 1 of you guys, hopefully we can get away with using 1 rig for all the characters. want more info, PM me please

Concept artists: ill need you guys first before we move on, i shouldnt need more than 3, but im not sure yet. if you want more info PM please

Team managment: the guy(s) who keep it all running, ill need 1-2 of you guys to help run the show, drawing up rotas for jobs and talking to the artists and coders on what needs doing and working stuff out to help the team, if you want more info please PM me

http://blenderartists.org/forum/showthread.php?t=84659 for pics of gun

these are ingame models, although rendered. these are what will be seen in the game.

so far, the guns are at about 5k (high i know, need optimizing), the castle is about 20K, which isnt to bad considering that not all of it will be seen at once, also we can use LOD models which can be switched depening on distance… i would like to use Nor, spec and blooms maps if possible to make the game look really awesome :). might be asking to much but youll never know if you never try.

anyway guys, this is my offer to any one who wants to give a hand, dont have to if you dont want to, but it would be nice

I have the right to control you if you join my project :rolleyes:

FIrst of all, prepare to get a lot of fire, your lucky you didnt post thie in the GE forum, youd be dead right now.
Second, Do you have any experience wiht the GE at all? What wil participants gain form this?(other than a feeling of accomplishment) Its hard to get people(especially GE peeps) to join these wihtout good reason.
Just a few thoughts
peace
Drew

coding aside, im pretty good with the GE, i have a lot of low poly modeling experience and expeirence with the GE…ive never actaully made a full on game with it. but i know i could with a little team, and i would enjoy it a lot more, and im sure the other team members would to.

i cant promise anything other than what i said before, who knows what will happen, maybe will get picked up by a sponsor if it was good, maybe not…thats to far ahead at the moment…

if people of elysiun dont join, ill have to look some were else, but you know its best to ask people are better with blender than 3D studio max, maya etc…

ALright, just asking, there are a lot of threads like this by noobs with 0 experience.
good luck
Drew

free_ality: yea i know what you mean man, there are a lot of projects that are posted, but i know how big an undertaking like this is. thats why im limiting it to one map, max 8 players, possibly less and about 2 guns…any more than that and it gets really hard, specialy if you through in a story…

i would love to start working onsomething like GOW, but i know its not going to happen, best we can do with ogre, blender, verse is probably ps2 levels, and im sure we could reach that level and possibly better if we took are time and learnt from each other. 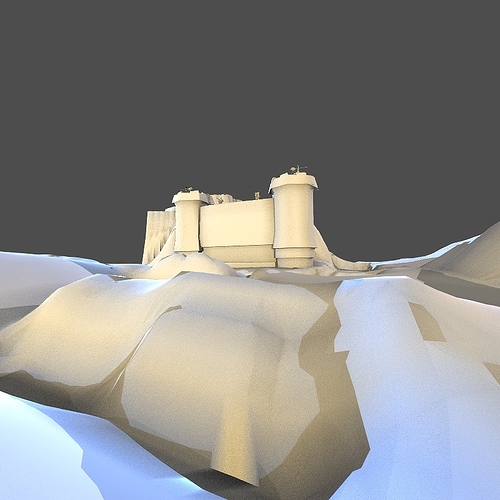 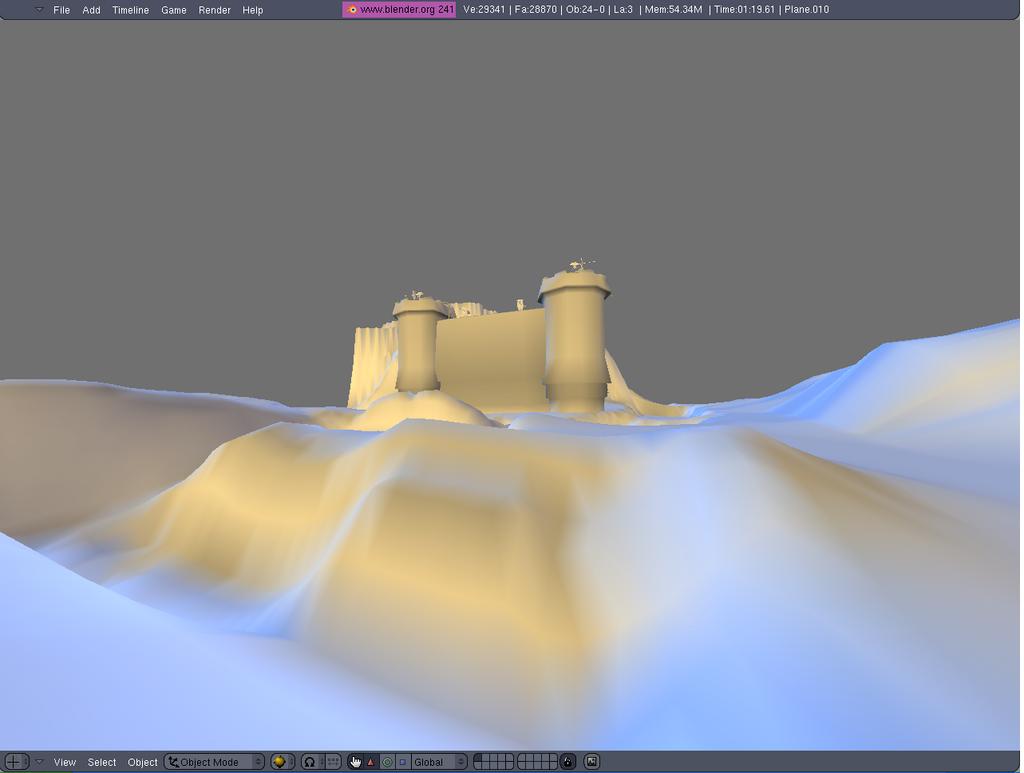 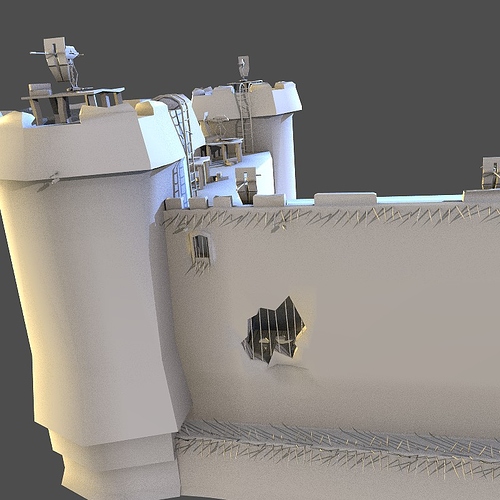 hey guys little update on gun, made the arm stronger, does it look better?

im gona start working on some tech stuff soon…just waiting for ppl to join, so im going to post some i candy for everyone to see 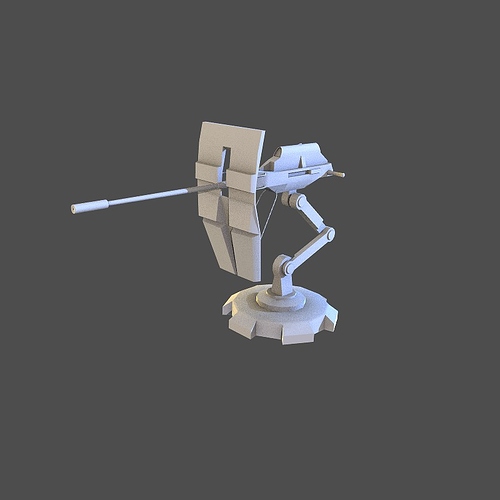 Ha, personally, I love these little guns. you mentioned they were a bit high poly, did you fix that yet?

And If your looking for people to join, you may want to post this in the GE forum(as it seems you know what your doing), there are more GE guys there.

I would join, but Im in the middle of my own game project

Your models look good, but they’re rather high poly- it’s going to take a good graphics card to run efficiently. Also, you don’t look like a noob- you presented this project much better than any other person saying “i thik itd b sweet to make a 1 person shoota. join my team”. You supplied all the information that you should have.

Unfortunately, I can’t join- still working on getting better with Blender. Maybe later, if the project is still going.

here is a texture test for the GE, just one texture that has been baked from a high res mesh. not anything speical, but i think it looks pretty good…there are a few texture issues that can be cleaned up in PS, but overall if the models all look like this i think are team could make a pretty sweet game.