This is something ive been considering and im not looking for speculated answers sorry. Basically i want to add another graphics card into my system for the purpose of being able to use my computer during a render. So my primary gpu and 75% of my cpu cores will be used for rendering whilst the other 25% of cpu cores and the secondary gpu will be used to keep my pc functioning without lag and be able to use it to watch videos and such during renders. Right now when rendering my computer becomes unusable and it would be nice to use a second gpu to watch a movie or youtube whilst my main gpu is doing all the rendering. I know how to set it all up but im wondering, does the monitor have to be plugged into the respective gpu to get the video output. I have 3 monitors all plugged into a 980 ti, if i plug another cheaper card like a gtx 750 into my syetm will i have to plug a monitor into the 750 to receive video output. Also whatr downsides is there to doing this?

The gtx 750 is a low end gpu of previous generation (Maxwell, I think). You might get by with 3 monitors (2 DP and 1 mini hdmi, if I’m correct), and for simple tasks like surfing, watching videos and such, it would do the job. For anything else, like CG tasks etc, things will get rough. I would probably try to find a used 980 at ~150$. It’s a safer choice in case you want to continue working during rendering time.
Of course, you’ll have to check your motherboard’s manual to see how pcie lanes are distributed. If you are on a consumer platform, then the primary gpu would run with x8 pcie lanes and the secondary with x8 or x4, depending on the demand you have for various devices. And last but not least, you must be sure your psu can handle the job, i.e. if it has adequate wattage and enough pcie cables for dual cards. In case you pick a low end gpu like 750, 1050 etc, then it’s possible that you won’t be needing extra cables, because some of them are powered directly from the motherboard.

For context, I have a Ryzen 7 1700x, 980 ti, 24gb ram and the asus rog b450f motherboard. I’m just wondering the implications of adding another gpu that won’t be used for rendering. My 980 ti will be rendering and the 2nd used for Web surfing, watching videos etc

No problem with adding a 2nd gpu. You can choose within blender’s preferences which one will do the rendering. I just think you should check if it’s needed to switch slots between cards, i.e. installing the 750 in the upper (1st slot) and moving the 980ti to the 2nd x16 wide slot. This is probably what I would do.
And of course, all 3 monitors should be connected to the 750.

Should check on the requirements of EVEE under 2.8. Viewports being driven from a single GPU means having something reasonably good for the day to day Blender work.

I have 2 GPU’s installed and do not get the option to choose which one I want to use as a display. I also want to be able to use both for rendering but the GTX 970 is forced as display and is completely ignored during rendering with GPU compute turned on. 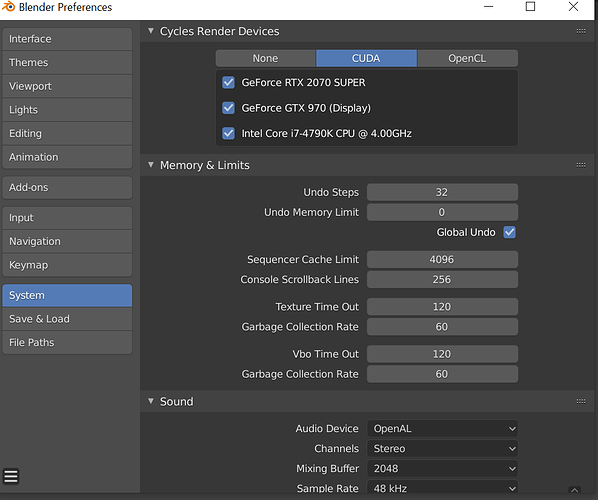 That’s fine, I just bought a Vega 56 to replace my 980 ti and I also got a 560 ti. The vega will be the only card being used in blender. The 560 will be plugged into my 2 spare monitors giving me the ability to watch videos and browse without the extreme lag during renders

You only get to choose which GPU to use for rendering, the display has to be the GPU the monitors are plugged into.

The 970 is still used for rendering as well as display purposes. Check the task manager to see GPU load

You’re wrong. It’s as simple as u checking the gpu you don’t wanna use and using nvidia graphics settings to set what applications use which gpu. Vega 56 for blender 560 ti for Firefox etc.

Ok, there seems to be a slight mix.

Sorry I must’ve been unclear my bad. Ye I’m wanting to only use my best gpu for blender whilst a spare gpu runs 2 extra monitors allowing me to do other tasks on my computer whilst rendering. I just didn’t know if it worked like that but it seems like I can. I just couldn’t find any examples online. Thnx

I hvnt got the amd card yet so I’m still using nvidia so that’s my mistake.

I did that in the past, or when I want to work in the view port, and render in the background.

Well my main screen (middle) will he connected to the main gpu which will he used for rendering g but also used for gaming and the 2 other monitors plugged into the spare so. I don’t mibd my middle monitor being unusable during a render as long as the 2 spare are free in the mean time.

Ok, just please refrain from giving false advice if you’re unsure. Btw. just so you know: That comment has another flaw. In the NVIDIA panel you can set the card regarding the OpenGL usage of programs. Under Windows this can be abused via right-click menu to render Eevee on two cards with two Blender instances running.
Settings regarding Cycles rendering, whether CUDA or OpenCL are solely Blender’s business.