Multiple Object In One Action

I am attempting to add multiple objects into 1 Action but struggling to do so.

Here is the setup;

7 Diamonds that begin stacked behind each other 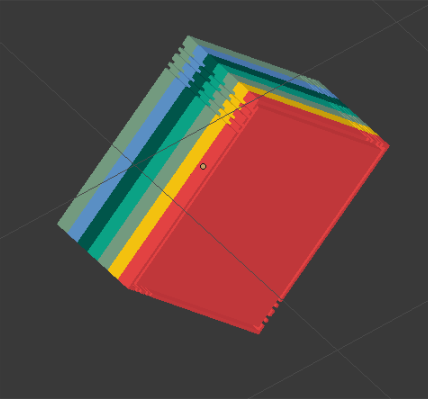 Expand Action: where they all move outward from the Front Diamon

Collapse Action: where they all returned behind the front Diamond

In the above Images they are stack behind the Red Diamond, I would like to have each Diamond be the front diamond in separate instances. Thus have each Object contain 2 Actions (expand/collapse) where all other objects are associated.

Thank you in advance for the assistance!

I believe I have figured this out, maybe…

Is it possible to add all the actions from the below image which are in different objects into one animation or action? 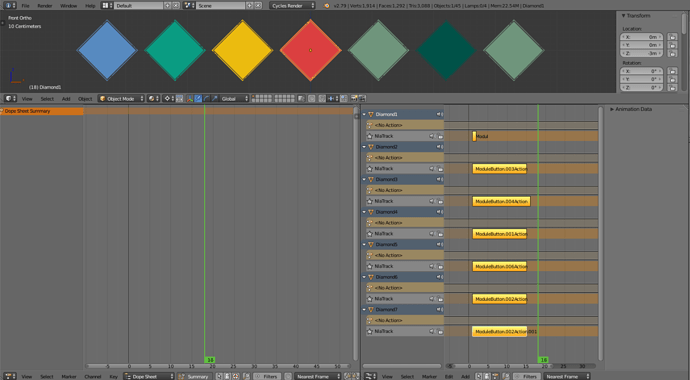 Armature, and make a bone within the armature for each object. Thus you can parent an entire object to a bone.

Most examples of an armature in rigging are for organic things, but for mechanical rigs assigning a whole object rather than a vertex group within an object to a bone is just fine. So this is treated the same way.

Then creating actions for the armature should be fairly straight-forward. After being done with that, set each bone in the object to use the action constraint. Then create an additional target bone to control the action, where moving it (when assigned to the action constraints of the other bones) - will scroll through the frames of the action.

This little video clip I found should give an idea:

Not sure how familiar you are with armatures, but bones don’t have to be connected. Generally there is a parent-child relationship that is set, and movements can be made relative in that regard. Keep in mind animations/movement in pose mode, edit sets the relationships/positions, and any animation in object tends to be the relation of the armature position as a whole to the scene.

Thanks for the response, I spent sometime digging into YouTube and ended up finding a very similar and it appears it has worked out very well for what I am building!

I really appreciate you providing the information and will run through it to make sure I am not missing anything, always measure twice cut once

I select multiple objects.
But as soon as I assign a randomize transform keyframe for one of the objects, that ends up being used as the random rotation for all of the objects.
Any tips to radom rotate individually but with all objects selected ?
thx !

I have almost a 100 objects where I want to create one action with, is that possible?