As you may see, there are 2 models here. One is in edit mode to make it easier to see. Each has their own UV layout for the texture. My goal is to combine these 2 meshes into 1 model.

I want to know if I am able to combine the meshes and have each of them have their own texture still. I tried to make another UV layer, but I couldn’t seem to copy the UV map of one to another layer of the… then combined model. I don’t want to unwrap the models again because then it wont be lined up the same way. I hope this isn’t too confusing…

The reason this whole thing is important to me is because I want the face to be identical on all the models I make, but they wont all be shaped the same, so I need to learn how to remove parts of an object, maintain their UV layout and also have a texture on the other part of the model. Also, in time, I will have replaceable textures for the face, so I’d rather just swap out that texture and not interfere with the helmet part etc.

Any help would be much appreciated! 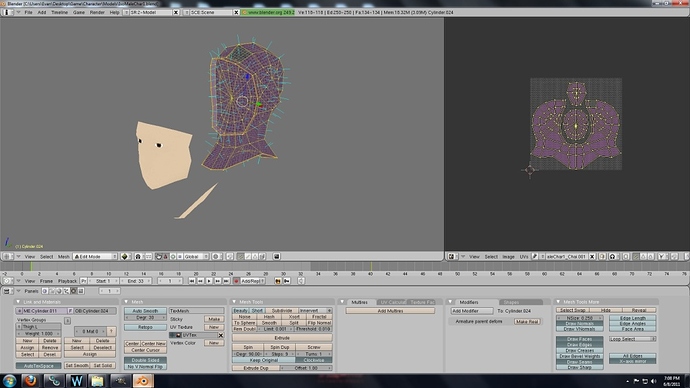 Option 1
Give the face and the rest of the head separate materials. Add the face texture to the face material and for the head material add the head texture. It won’t matter then that they have overlapping uvs
Option 2
Join then objects together to give overlapping uvs. In Object Mode create a new UV by pressing the New button. This will duplicate the existing uvs. Then you can use one uv for the head and one for the rest of the head.

I’ve tried to do what you said a few times. I’m afraid I’m not too sure how to get it to work, or what to expect. I use 2.49 so I’m not sure if all the features like that would work for me. I’m only “good” at the modeling part, so I’m not very good with the texturing part so my knowledge with the UV things are quite limited. Is there a better/simpler way to explain this? Perhaps… a couple screenshots or something? I do appreciate the reply, I’m just a bit slow

If you have time, make a new copy of your file for testing purposes. Join the two objects into one, and they should still be seperate UVs and materials, and they shoudl show up as material indexes. At least from previous experience I think this works.

I’m not even too sure how to set a texture in a material thing. I’ve just been putting my textures in the UV/Image Editor window. The only things I seem to be able to do with the material thing itself is set a solid color + make it shiny or something, not sure how to do a texture that way. I really suck at this <____< I’ve had so many problems with 2.57 that I stick to 2.49. I get the feeling I’m going to be even further behind because of that

Mapping an image to UV is much easier in 2.57b, but if you need help I can walk you through it for 2.49 too. Let me see if I understand what you want - I will make a screenshot collection in a few minutes.

In about 30 minutes, midnight by my clock in Texas, the video should be viewable. Hope it helps, and I apologize for the breathing and panic trying to get my mouse to stay put while I tried to maximize my screen with ctrl-up arrow… my desk is skanted, and the dang thing kept sliding back

I really do appreciate the video, it helped me with some things. However… when you go into edit mode and select the mesh, the UV are actually overlapping.

I believe what I need is… in the Mesh tool panel thing, where it says Sticky, UV Texture, Vertex Color, and you can add multiples of them… I think what I need is to have a second UV texture layer in that thing. One for the face, one for the hood. When I tried to do that before, I couldn’t keep them separate after joining the objects, so the face UV would have the hood as a big square over it (messing it up) and vice versa with the hood UV.

Is there a way for me to take the 2 separate UV maps and put them on a different layer in that method? I probably should have mentioned before, but part of what I do is export them to different game engines and stuff, mostly exploring. They don’t seem to support the Material method blender uses and it requires the separate UV layers. This is becoming more of a hassle than I thought it would be

Option 1
Give the face and the rest of the head separate materials. Add the face texture to the face material and for the head material add the head texture. It won’t matter then that they have overlapping uvs
Option 2
Join then objects together to give overlapping uvs. In Object Mode create a new UV by pressing the New button. This will duplicate the existing uvs. Then you can use one uv for the head and one for the rest of the head.

I believe the second option Richard gave you a lead toward what you want. I apologize as I have no experience exporting for external game engines - I have only seen tutorials on blendernation and such for exporting objects for engines.

I really don’t know how making a separate UV layer for the face and one for the rest would not still rely on the texture channels of the Blender material. Maybe it has to do with the OBJ export format or Collada? Please do post your solution so we can learn from it.

Is there a way you could use the script in the 2.49 image editor to consolidate into one image the uv’s, and then re-unwrap? You would just then have to clone paint in the different image for the face(?)

When I do that, I can’t seem to copy the UV over to a different layer. That way, they overlap still. In Blender it looks just fine, but not elsewhere.

Edit1: I don’t know what you mean by clone paint either. Basically I just save the UV face layout, put it in gimp and texture it in there and then put it back into Blender so it lines up. I don’t do textures in Blender so I don’t… know?.. o.O

Edit2: I use .ase and the .psk/psa export scripts. I’m not too sure how the others work.

Edit3: <_____< Last edit maybe? That consolidate into one image feature is quite nice actually. It works fine if the face were always to be the same with that hood. However, in the future I plan on having different face options / swapping the texture, so the 2 layer UV would kind of be important for that. This is very helpful though for a lot of things. Thanks for pointing it out