I try to add some multiprocessing to my addon. I tried to do everything like in this video tutorial

2.93\python\lib\concurrent\futures\_base.py", line 389, in __get_result raise self._exception looks like Bledner can use this feature but A process in the process pool was terminated abruptly while the future was running or pending. I do everything same as guy in tutorial - his code work well, my one Blender don’t want to run. What I do wrong?

So I guess no one know how to run damn multiprocesing in Blender via python addon. I already searched across internet… Looks like it can run only as Blender instances processes or as something outside of Blender (like UVPackmasterPro addon do - it has some packer.exe inside archive).

Is there really no any option, is everything so sad in this direction?

It seems that ProcessPoolExecutor is broken. ThreadPoolExecutor does appear to work, but you won’t get actual concurrency. You’ll also bog down the application into practical unusability (though it still responds every second or so). I also notice that Python is really slow. Counting to a billion takes like half a minute, when it takes half a second in C.

With ProcessPoolExecutor, I get this:

(Yes, it does print twice)

Working (though janky) ThreadPoolExecutor code (note that I don’t call shutdown() on pool here, which should however be done in a serious application):

Given the general slowness of the language, I wouldn’t use this approach, and try calling an external binary manually instead. https://stackoverflow.com/a/50678477 Of course that means diving into a whole new world of programming. If I had to do it right now, I would probably pick Golang to do it.

I think the issue you’re running into is an issue I’ve seen in other 3d software. Basically the multiprocessing is spawning off other Python interpreter instances, and since Blender is the Python interpreter, it is spawning other Blender instances. The way I’ve worked around that is to explicitly create a Python (outside of Blender) subprocess and do all of your calculations that way.

Another way you could go about this is as @Zyl said, subprocess another binary, or create a Python module in C/C++/Rust (these languages have ways to “easily” create modules… not sure about other languages, though) and do the computation there instead.

Not the solution in my case. External something in C/C++ - I am still newbie even in Python. To loose Blender API access - my calculations require such access.

I need speed up for mesh recalculation for sort of cage/spots redraw in invoke operator that running modal (if I just said some bullshit - I still don’t sure I understend those invoke/modal things correctly). I draw cage with some spots, to do this I have to run through all vertices and check their coordinates.

Bledner run it all as single process on single core… with meshes more than +/- 100 000 vertices performance is disgusting. I just made manual refresh mode for such cases, sort of dumb solution but I don’t see ways to do anything better.

Thanks for reply anyway.

Not sure if I understood that correctly, but if you need the tightest bounding box around an object’s vertices, I believe Blender has that readily available. Alternatively you could look into utilizing the GPU if the task is suited for it, which generally is the case if dividing the problem into smaller problems also divides the size of both input and output data. (Again, new territory to explore) Even more alternatively, you could try raising a storm (politely) on the Blender issue tracker: https://developer.blender.org/

Haha… of course I know that bounding box available as built in API feature )) it work fast and smooth, but it available only as local representation.

My addon is about setting origin transforms, part of it about seting origin location to fixed spots like bound corners, etc. I want to have both local and world bound + I calculate additional things like center of mass, “border mesh” (I call it this way) spot, drop origin to wordl/local bound. For all this I need to go through all model vertices… Use GPU for this maybe good point but I have no idea how to do such calculation splitting. 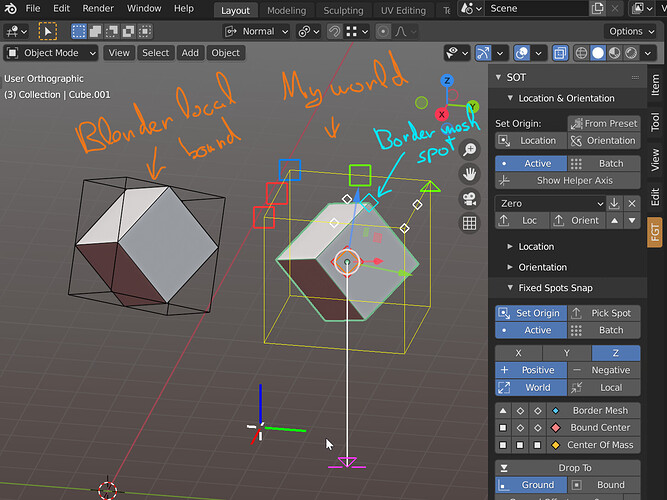 1453×1089 278 KB
I have thought I can just add a bit of simple paralell calculations to spedd up things, but Bledner Pythons is not just Python. Even if it possible somehow, it look too difficult for me.

About Blender issue tracker and raising storm - this whole place look strange for me. Some tasks, some commits, I look at all this and I don’t understand what the hell is going on… bahhhhh, weird place. If you fill confident in this place and you can start poking devs to add some “easy to use” multitasking option for python addons/noob addon devs like me - please do it.

This is just what Blender addon development is like in my experience. As another guy put it: “you figure things out in the trenches, usually after getting shot a couple of times”. The link I posted is where Blender developers track their work and what needs to be done. Submitting a report there gives you the best chances of getting help. They won’t really check this forum because a support request having to do with an actual bug is quite rare.

If you do one of these, it should speed up the calculations tremendously. Possibly even let you do stuff in near real time. Lastly, multi-threading is hard. And even harder in Python, because of the GIL. The only two options you have is to subprocess the work into one or more processes, or do the processing in a language that supports multi-threading.

Bounding box in object local space converted by world matrix will not give you world space object bounding box… Still thank you for attempt to help. I already do ton of matrix math in my addon, much more than I ever expect I will do during my whole life ))

Do some matrix math on the bounding box

If I have some time tonight, I’ll see if I can create a module in Rust to do the calculations. There may be a way I can access that information.

I did a simple multithreading test with python. It works fine. If someone is interested you can use it.

Pastebin.com is the number one paste tool since 2002. Pastebin is a website where you can store text online for a set period of time.

Works fine where? In Blender? concurrent.futures work fine too, outside of Blender )))

You can use Numpy magic to calculate bounding boxes quickly. I recommend that you do not try to use the multithreading if you have started coded recently, especially in Blender where it is already managed. Someone above already commented on this.

You can pass the whole mesh vertex coordinates to a giant Numpy array and ask Numpy to give you the bounding boxes. Blender has implicit foreach function to pass huge arrays to Numpy like

I did a simple multithreading test with python. It works fine.

That does not work inside Blender.

I did not test it in Blender. In theory it should work. What is the error?

Basically I found multithreading is pretty simple. In Python. Python is the most popular language at the moment after C.

Your proposal is the same as mine using ProcessPoolExecutor except without the use of futures, and it does do not work in Blender as shown here for reasons explained here.

Thanks for the reply. I tried my code and created a simple addon. But I cannot run the addon.
Here is my addon:
Template.zip (4.1 KB)

the issue is with importing _bpy on a process.