My birch tree shader. Is it correct? (PHOTO)

Hi guys. I am currently working on birch forest animation. Its turn out that there is nothing about how to do birch tree material in internet. I was looking for it everywhere. So i decided to make myself, despite that i am still noob in node editor. But i was trying. And i know that something must be wrong in my nodes setup, as i know already approximately how the nodes needs to be arranged but i am still not enough aware about how few of them interact and work together.

So, i want you guys, to correct me if something wrong in my nodes. By the way this is my biggest ever node composition so far:) So probably in my nodes will be redundancy or lack of something. 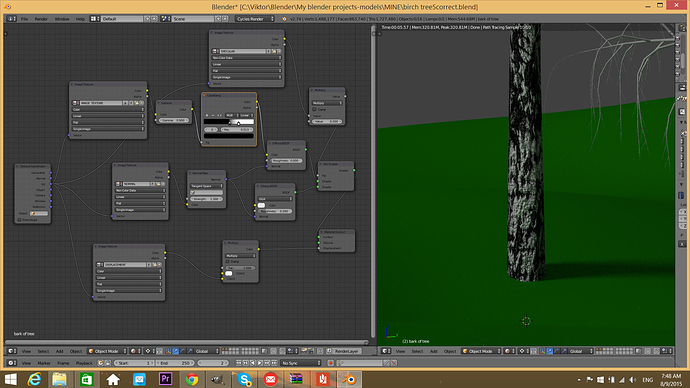 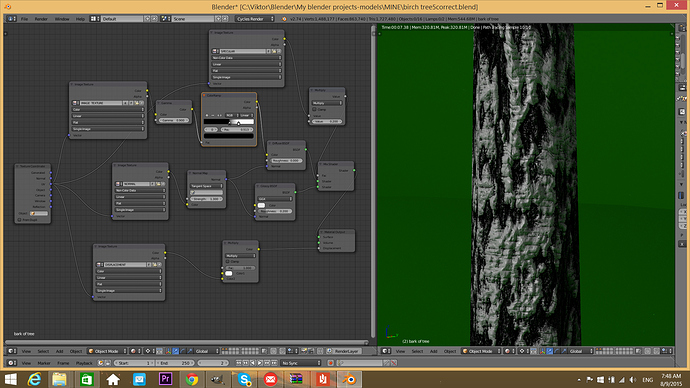 And i forgot to mention, that specular, normal and displacement i created in GIMP.

And i forgot to mention, that specular, normal and displacement i created in GIMP.

As i understand, absence of comments means that everything ok with my node setup and i can continue my work, right?

Not sure about normals and displacement if it will work, I don’t use displacement.
Also, you might want to randomize if you’re going to populate an entire forest with it.

compare it to real tree

white should also be whiter

Man, I wish they would rename this Displacement input until it finally does what it says. This is so confusing to new users…

Have you looked at reference photos for birch bark? There tends to be a papery white outer layer, which usually has horizontal slits. Depending on the tree, there also might be patches where the outer layer has peeled off and rough, dark bark can be seen underneath.

Looking at your images, the white papery bark needs to be a lot smoother - it’s very lumpy, where as that papery outer layer is usually pretty smooth, except at the edges of the holes and breaks. Crucially, at this point, it tends to peel OUTWARDS to a sharp edge, and then the surface will drop away to the rough, dark bark underneath. It looks like in your example, the white outer bark seems to curve INWARDS, which makes it look like it’s a white blob sticking to the tree, rather than a sheet of smooth bark over the top of the rougher, darker bark underneath.

I’ve never been a great fan of normal maps for image-derived textures (they come into their own if you’re generating them from 3D geometry, but I’ve yet to see a compelling case for using them from images), and if by “created in GIMP” you mean you ran it through an automatic normal filter, I don’t think that’s working for you at all. There are more involved programs for making normal maps that might be better, but for the best ones you usually have to fork out money.

Assuming you’re working from a photo texture rather than building it from scratch, bear in mind that part of the process of creating a bump map involves flattening a lot of the detail from your diffuse image down, which means that you’re automatically losing the “depth” of the bumps. For a texture like this, you might actually find that it’s better just to use the actual diffuse image, desaturated (or using the RGB to BW converter node) as your bumpmap instead of trying to make one. If you do, use an RGB curves node, and have the graph go up sharply and then plateau - you want the “dark” part to be bumpy and the “light” part to be smooth.

As for specmap, I personally don’t think you need one for this kind of texture; you’d do much better using a fresnel controller to pick out the angles, and run the diffuse texture image into the glossy colour too.

I had a play around, and at the end of the day I really think less is more for this kind of texture - you really don’t want the bumpmap to be bulging off your mesh because it’ll just look rubbish. Your diffuse texture is doing most of the work for you already, all you need is a little texture to catch the light. As long as the dark parts are rough and the light parts are smooth, you should get nice results. Remember, the key to convincing reflections is Fresnel, so the Layer Weight node is your friend.