My first and second projects.

I plan to use the community here to help me with an ambitious (to me) project I am working on. I’m going to see if I can load the results of my first two expeditions into Blender. This was a spaceship that I made for a story I wrote for an online browser game. This is a mattercaster from the same story, preparing to launch the ship to near lightspeed. 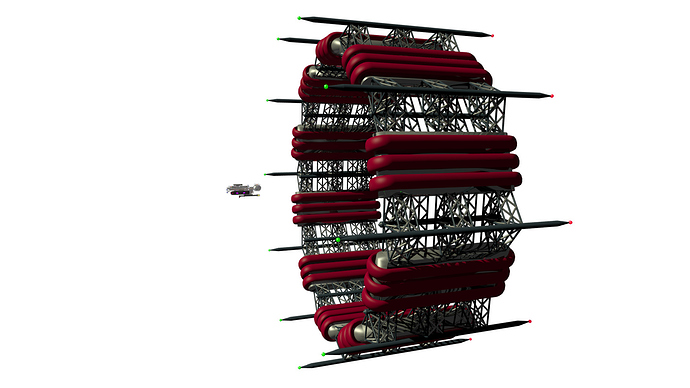 I have posted these as the transparent background png’s, which I made with Blender. I then GIMPed them onto starscapes for the story.

I wish I could have made the viewscreen look as if it were transparent glass.

It may also be a cool effect to create a scene lighting that gives a more dynamic feel so that when you put the starfield behind the ships the scene becomes more integrated. One last tip, try putting the ship lights on a different render layer and then adding a glow/glare effect to them. Nice job on the mattercaster!

Thanks for the comments, InSearchGFX. I am proud of the caster.

As I said, these were my first significant projects (done in 2.53) and I’m still not sure about render layers at all. (As in I have no idea what they mean operationally; I know that they exist.) I agree that a glare effect on the lighted portions would be nice. Even though it wouldn’t exist in space (nothing to scatter the light), it would exist on the screen, lens, or whatever. If you or someone else could point me towards a simple (preferably text) tutorial on them, I’d love it.

As far as “more dynamic” scene lighting is concerned, I’m not quite sure what you mean. Lighting in open space is pretty simple (near a planet it could get more complex). As it was, I artistically cheated a little bit by putting a shred of emission on a lot of things just so they could be seen in shadow (even though that would not be true in space with a single light source (the Sun). If you want to see some of the photo’s that were actually used in the game, you can go to http://www.flickr.com/photos/[email protected]/ (if my current status allows for that link to exist). The moniker on the Flickr account is my in-game name.

For the project I’m currently working on, I’m trying to get the diffuse lighting effects to work properly, but that one is going to be awhile before I even get to the WiP stage. First I have to resolve some animation problems I’m having.

That’s cool, makes me wanna try one of those space gates from Cowboy Bebop.