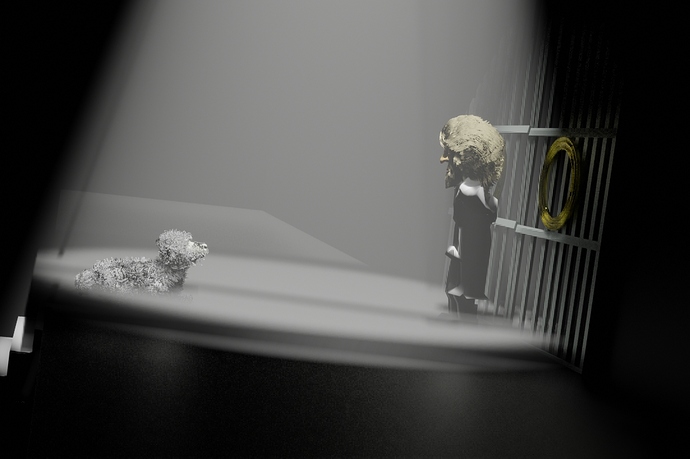 This is the short movie. I propose the goal of making a mini-short in less than two weeks and this is the result. Quite improvable, I will improve for the next one (in another two weeks).

Please, any suggestion and / or opinion is welcome, given that I am starting in the world of 3D animation. Thank you so much!

PS: the “music” is also composed of the function of animation.

I definitely like the film noir “look and feel” of this piece, the models (especiallfy of the man), and the expressiveness. But “the film, itself,” in terms of cinematography and shot placement, seemed very disjointed especially at the start. If I may offer a couple of suggestions …

I try to start by blocking-out what the movie is going to be, starting with simple objects – cubes, cylinders, cones – that are “to scale.” (They’re all “linked assets.”) I place cameras, shoot various possible shots with reckless abandon (using the “stamp” feature to identify them), then take them to a video editor. (I use Final Cut Pro but you can use Blender’s, or anything else … ShotCut, etc.) There I try to put the movie together before I do anything else.

EEVEE in Blender 2.8 is fast enough by itself, or you can use “OpenGL Preview” in 2.79. The point is to be able to freely experiment with film clips that you don’t feel bad about throwing away, but that do convey the layout of the frame accurately. (“I’ve no idea if I’ll use this, but let’s film it and see.”)

The movie is “cut together” in a very conventional way. Then I start to replace the stand-ins with real objects, and rendering the pieces of film that I’ve decided I need. I then assemble them using the video editor. Music – prepared separately (since the timing of the film is now known – is added at that time.

At first blush, it seems like a backwards way of approaching it, but it really isn’t. It’s actually a very efficient way to use your time which gives you a lot of creative options … cheaply. Human imagination – guided by technology – is a marvelous thing: where there’s a cylinder, your mind’s eye sees the same-sized dog.