My first attempt at a in depth story

Ok so here is the situation, i joined blender like ages and ages ago, i got the basics and figured out how animating worked, i then went on to design my own character, from that i wanted to make a story board, but to do that i needed a story xD so now ive tracked back the story that i created for Prince Keba, and i would like some honest feedback, i know its not gonna be amazing, but its good to start somewhere.

You can find my story here https://docs.google.com/document/d/1c7ER93viVXY09zrgXbufM3JxYRvJJ1xUc6OBN7bPuHQ/edit?hl=en&authkey=CMzwrPoE
And i look forward to hearing what people have to say, whether it be good or bad xD

I just quickly skimmed through it, but there was a few grammatical errors, and the story didn’t flow as well as it could have. Also, everything happens too quickly in the first page of chapter one. What you have so far can be easily been extended into two or three more pages. Other than that, so far, so good.

Very nice idea, i see this turning into a deep and meaningful story.

yeah, my gramma has always sucked, i got someone helping me with that part, the story doesnt flow as well as i had hoped

ill have to look on adding more depth to the chapter, but for now i was just trying to get from A to B lol
ive got the first 4-5 chapters in my head, and i been meaning to put them all onto paper, and randomly i decided that now was the time to do it haha

yeah, i’m writing my own at the moment, being doing so for a year :o, still working on it. Good little tips like adding at least a sentence to it each day really helps. It has become habit now that every night before i go to bed i have to add to my story. Mine needs more depth as well, but it has something like 78 pages so far :eek:, not finished yet.

Also MAKE SURE YOU KNOW THE ENDING! (big hint!)

Lmao xD oh i know the ending, the only thing that changes in my mind is how i get from A to Z, i have a rather active mind, totally random idea’s and struggle to sleep when most people do xD so i take that time when i cant sleep to learn new things, or do stuff like draw, or write
Ive designed the main character, ive designed his dragon form, and im now in the middle of designing the monster at the etrance of the cave lol, thank you blender for giving us “Chaos and Evolutions” xD

Oooooh i knew i recognised your name xD i saw your WiP earlier, prety good scene set up there ;o

Cool title logo.
The premise reminds me of Aquaman. Although there are plenty of other less cheesy characters that have animal powers too.

My biggest advice would be to ditch the prologue. You can give out all that information snippet by snippet as the story progresses. Just jump straight into the action -it’ll make it much more compelling and immediate to not know what’s going on and have to figure out as the opening scenes play out.

The King seems like a really bad father. It’d be funny if there was some court adviser who acknowledged the fact that he was probably setting his sons up to be mortal enemies.

It’s also not clear what the kingdom needs salvation from. The conflict of the story so far is between the brothers which doesn’t say much about the need for this special child in the first place. I would set up the major problem facing the kingdom in the first page. It seems like it’s pretty important.

Writing wise it needs to be more visual. There’s not much physical description so its very abstract and hard to visualize. The way I think of writing is each sentence as a string of words to create a picture in the reader’s mind.
You also spend a lot of time talking about the big events, but don’t really hit on the details. The details will give the story its character and will help the reader remember the bigger events. For example you explain there’s a coronation but you could add a detail to describe it like “A pigeon-keeper is busily squabbling against a hungry bird trying to escape its basket before it’s turn to be released” (like when they release a bunch of birds at big ceremonies) or something like that. You shouldn’t try to describe everything, but try and pick at least one detail that the reader can create a picture of in their mind. This should be fairly easy if you can picture it in your mind yourself. Just write what you see, not what it means.
In addition to that, if this is going to be an animation at some point, keep in mind that the only stuff you can ever tell the audience directly on film has to be in the dialog.

And please use more paragraphs/spacing. I have this problem too when I write lol. Even if it doesn’t feel correct to do so, the reader will love you, trust me.

Oh and you might want to figure out what tense you want to write in. You change back and forth between present and past tense in a few places in Chapter 1 (obviously the prologue is separate). It can be confusing, that’s all.

Write the story you want to read/or watch. That’s the best advice I can give.

wow thank you for that pickles xD
as stated English wasnt my strongest point at school haha, i just have a lot of random stuff in my head xD so ill try my best to get those images on paper.
as for the king, hes not meant to be a bad father, but the twin is meant to be using his powers to try and influence the kings decision, the only thing that stops him is the symbol on the dragon… as for salvation from what, it was meant to be salvation of what is about to happen (you know kinda like a prophecy), but now you mension a jester maybe more idea’s can flow ;o and i can change it a bit xD

now back to the drawing board hmmmmm ill get back to this ;o in the meantime if anybody else wants to critique please do, cus i know i need a lot of help on whats going wrong or even right with the story xD

I’m not really in a state for reading at mo, but i’ll get around to it…

Also I can’t find the series which I thought was really good (saved on my laptop!) But here’s some other youtube tutorials…

I remember that I thought this was a good series of workshops that cover many aspects of this task:
Writing A Great Script Fast

I was never a big fan of English class either. In fact I don’t read books, but I watch all kinds of movies. The storytelling principles are the same, just the mediums have different presentation restrictions. I find that script writing can be like an informal rough draft of a novel. It helps me write things as if for the screen first before translating that into prose. The tricky part is maintaining the pace with prose. The audience will have more leeway in filling in the blanks that they wouldn’t get with an actual image in front of them.

Glad I could help anyways. Keep working at it. My best writing tends to come from writing about things I have no idea how to write about, so just jump in. As a word of caution with fantasy, there’s a tendency I think with writers to only look at other fantasy movies/stories for inspiration, but fantasy stories still have human beings in them and you still probably want them to be realistic (just with fantastic magic and things) and all stories have human beings. Breaking down the boundary of genre is something that I think is really hard to do but will pay off if you can keep an open mind when writing, especially with fantasy lol I can be pretty harsh on fantasy writers when they fall into some of the more jarring pitfalls of that genre. The stories that view themselves as not in a particular genre tend to not fall into those pitfalls as easily because they’re free of the conventions and able to just tell the story that the writer really wants to tell.

http://wordplayer.com is a site with a series of very in-depth columns by the writers of the Pirates of the Caribbean trilogy that really really helped me out a few years back when I was learning to write scripts.

i just ordered a book last night ;o so when i get it ill have to let you know if it was helpful or not xD 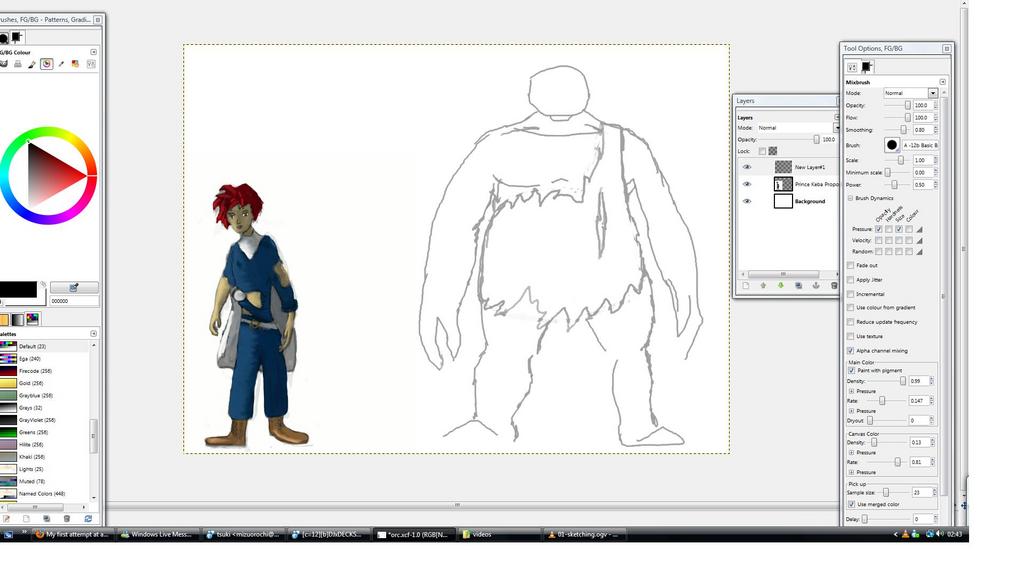 I like the design of the prince. He looks cool.

he was my first ever design, i designed him just after watching the blender video, chaos and evolution

i just like to be able to visualise my characters that way i can give them character and that always helps with storys progress ;o

just an update on my characters from the story 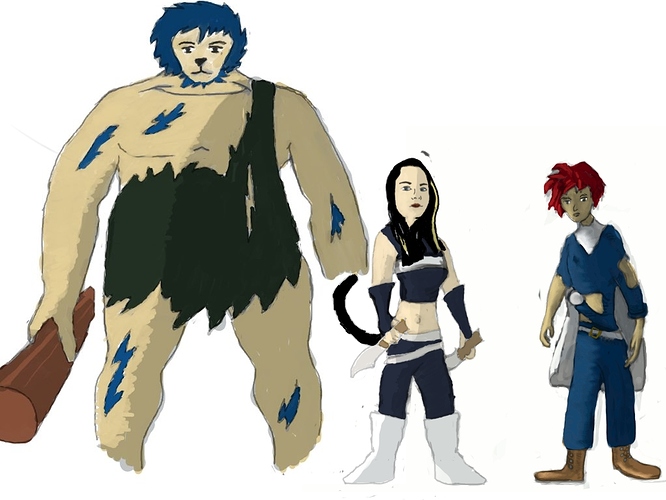 which is which? is the main character the big hairy creature with the log, or the guy on the right?

The big hairy creature is the champ with the spirit of the bear, the Prince is the one on the right, and the assassin is the one in the middle xD