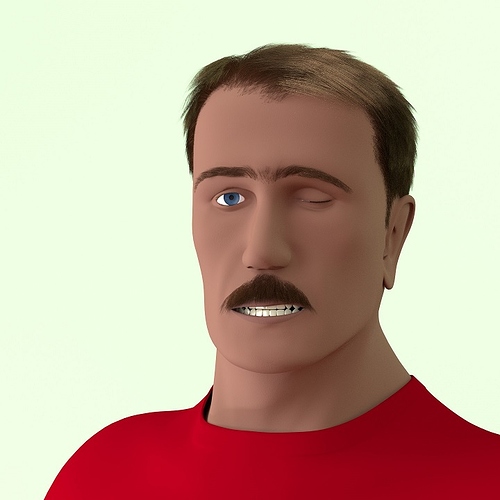 I have had a lot of personal firsts in the making of this video.

I started using blender about a year and a half ago (I think). I have learned lots so for but mostly I’ve learned how much I really don’t know about 3d content creation.

Thanks to all of you on this site and others that have inspired and instructed me to be better at this Blender thing.

Well enough rambling on, and on, and on. Here is is.

I’ve tried to correctly credit the work of others whose work I used or drew upon as follows:

All 3d objects and characters created by myself with the following exceptions:

Special thanks to CG Cookie for the Cookie Flex Rig used to create and animate the extra characters in the Scene with the Umbrellas.

Also thanks to Karinabudall for the gas pump, hose and nozzle.

That compositing was really very good. Video name could use an upgrade though

Thanks David. I took your advice and changed the display name of the video.

It’s clear that you’re a journeyman musician (great tune!) and still relatively new at 3D art. But it’s a damn impressive effort for a first outing. Not that you broke new ground in terms of realism or anything - but animation is just a damn lot of work, and difficult. Props for setting an ambitious goal and meeting it!

Thanks Kemmler. I kept working on the project and I can see where there is still lots of work to make it more believable. I had these ideas in my head but I had to let go of several things so I could complete the project in my lifetime. LOL

“Progress not Perfection” as they say.

I would like to improve my models and scenes for future projects. I’d also like to try to lip sync the character to my voice which looks like a whole 'nuther level of … Complexity.

We will see. Just now I’ve started working on some tunes that have been percolating in my head while I’ve been working on this project.

I picked up the Grass Essentials pack from Blender Guru and have been playing with that tonight.

Now I really need to figure out how to layer my scene so I can have a background and foreground separate to render on the limited memory on my GPU.