This is the first face I’ve tried to make, and I thought I’d ask for some comments. I’m not gonna tell you who it is, as there is no resemblance at all at the moment (I can tell you that it’s supposed to be a woman though). Mostly I’d like to ask you what you think of the topology.

Also, I’m having some problems with making the face look slender, without the cheeks seeming too hollow.

Anyway, tell me what you think. 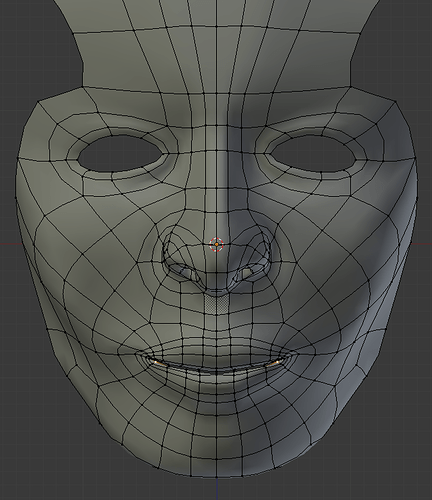 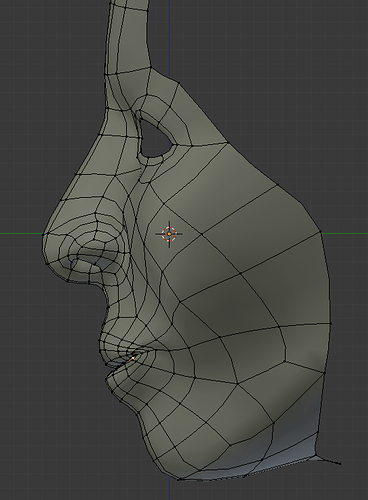 Nice keeping that topology clean is really going to help you when you have to animate the expressions.
Do a google search on cg cookie or jonathen williamson and find stuff about edge loops, itll be a good
lesson…loving this work so far keep it up!Try using real faces of references of people to get that realistic shape too peace out!

You want to keep in mind the underlying skeletal structure and room for muscles. Slender faces can be tricky, but they’re usually only seemingly slender because of the arrangement of the structure not necessarily any less fat than other faces.
I circled a couple poles close together that seem to really stand out as jarring flaws to me. You’ve got good topology around the main features (mouth, nose, eyes) but topology of the muscles of the face is important too. The one that starts at the sides of the mouth and goes up around the nose looks like its missing which is a pretty important loop for sneering and smiling. Working in the major facial muscles in your topology and learning more about those in that cheek/side of face/jaw region will make it much easier to get the slender look you want. The structure needs to be there first the you can just scale things down.

Nice work so far for your first one.

EDIT: I also just noticed the way you have the eyes currently has an edge going straight through the eyes. It’s usually better to have the side of the eyes be it’s own edge, so 2 loops going horizontally out of the eyes. It’ll come in handy when you go to actually model the lids.

EDIT 2: An overall loop around both eyes would probably help give some of the cheeks and upper regions a bit more control of the form too. Just a suggestion. 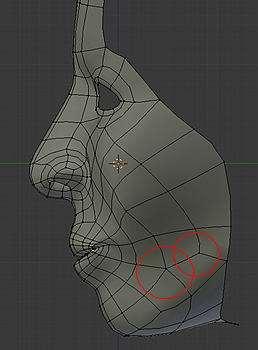 Thank you for your suggestions.

I redid some of the topology and added the loops you suggested Consideringthepickle. Some things improved, but now I’m not quite sure how to remove the pole at the corner of the mouth (if I need to remove it?). Also the the eyes got more loops, not sure if that will be a problem or not though. 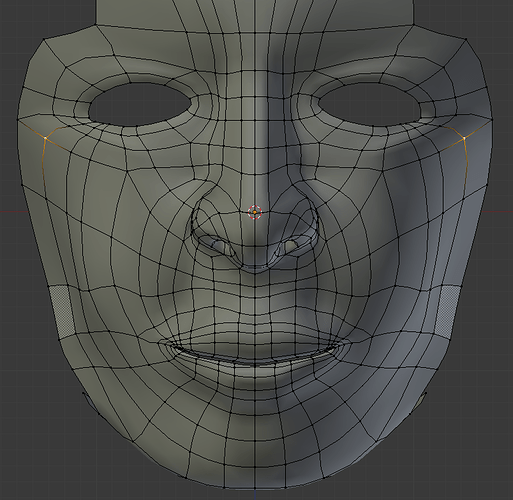 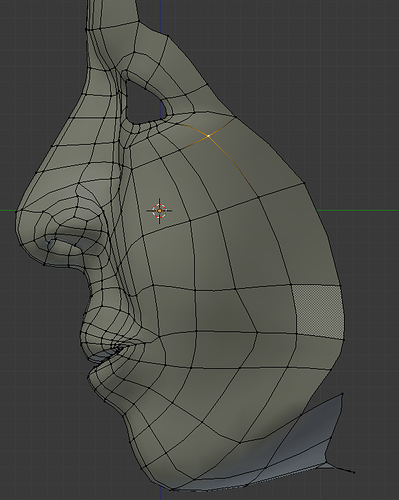 Select all and hit W - Smooth in editmode. That will clean up your mesh some.

There will inevitably be a few poles here and there. Somewhere around the corner of the mouth is usually where most people put one, although it might be wise to move it to a less prominent edge loop.
A loop around both the nose and mouth combined would help form the cheeks/sneering muscle thingy I forget the name of. Will also help section off your regions more cleanly.

Aside from that I think you should work on simplifying the mesh, merging some loops here and there to clean it up. Mainly on the cheeks area beneath the eyes which shouldn’t need many edges at all even for animation.

ok, one last update before going to bed. Thank you again for your comments

I removed some loops, but the mesh still looks a bit dense around the nose. I also did a slight re-arrangement of some loops, and I now have a loop that goes below the mouth and over the nose, and that seems to be a pretty important one. 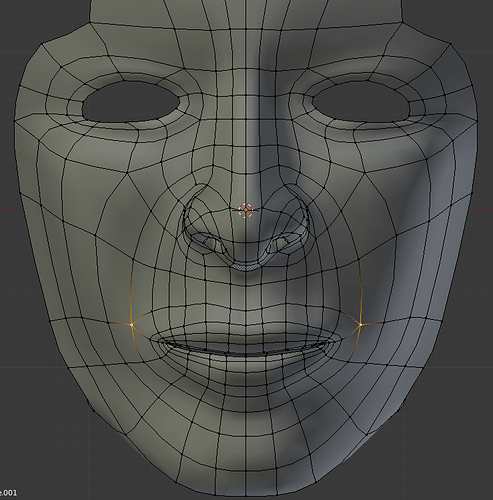 It’s starting to look very nice topology wise. Now that the topology is somewhat in order it’s safe to kind of form the slender look and cheeks you’re going for… I’d probably use proportional editing for that. That’s one tricky aspect to topology… I find that it takes me one step to get topology working and then that usually ends up looking like a generic face so it’s a whole other step I have to do to get the shape of the face right for what I want, but that’s much much easier to do and do well when the basic topology is good.

With the exception of the position of that pole so close to the mouth as you noted it looks really good though. This is coming along really nice.

The mesh looks nice and clean, but some of the edge loops are cutting across features of the face, rather than going around them.

The basic idea of getting a clean final mesh is that you should attempt to follow edges in the object with edges in the mesh, and surround protruding or intruding topological structures. This is why you put a couple of edge loops around the mouth, and a couple around each eye, and each nostril.

However, don’t forget that these are not the only structures on the face. It is a common mistake to concentrate on these to the exclusion of any other feature, and end up with a very generic, bland, face.

Above each eye is an eyebrow ridge. Less prominent in women, but still usually there. There are the cheek bones, the muscles passing down from there and the side of the nose to the jawline, and the jaw bone itself. Under the mouth is a bump, sometimes with a dimple. All of these are equally important, and should be isolated within the mesh, so that they can be clearly defined and easily animated. Making a cheek out of what is effectively the left-off edgeloops from the eyes and nose gives you no control over its real shape.

I personally would take several of the edgeloops from round under the mouth and pass them straight down to the jawline, build an oval structure below the mouth to be the tip of the chin, build a triangular(ish) structure to form the cheekbone and muscle group under it, under each eye, and a couple of roughly rectangular regions above the eyes to be the brow ridges.

You will end up with a lot more mesh, but each structure will be easy to manipulate, and the face will be easier to model.

If you find that the person you are modelling has other noticeable bumps or hollows, then put edgeloops around them too.

High mesh density is only wrong if it serves no purpose. Adding mesh density to improve detail and accuracy is not wrong. Essentially remember that anthing that sticks in or out should be modelled by extruding it out of the original mesh. This will add the correct topology to the mesh. As a rule of thumb, you will need three times as many edgeloops as there are features on the face. This is because you need an edge at the feature, and one either side to control the shape of the crease.

Thank you once again for all your comments. I’ll be on a vacation for about 2 weeks or so, which means that I won’t be able to work on this as I only have access to my laptop, but I’ll continue the work, and post updates when I get back home.