Hey all, I’m working on a new game and have been creating my first model. I think the edge flow is relatively good (though I’m having trouble with a couple of the tricks), and haven’t even touched on sculpting or retopologizing (done a bit of research, still not even sure how I’d go about the latter).

I feel like I’ve sort of hit a wall. On the one hand, I want to commit my mirror so I can start creating a bit of differentiation between the sides. On the other, I don’t want to make that commitment until I’m confident I’ve added what detail I want to be on both sides - and I’m having a sort of creative block.

And on the third hand, I want to go more of a realistic route. I’ve played a bit with seams and texture mapping, then watched one of Blender Guru’s newest videos and figured I should get Blender 4.19 before delving deeper into texturing, since it seems so much easier with the new shader.

Anyway, here’s the model so far - accepting ideas on design additions and changes 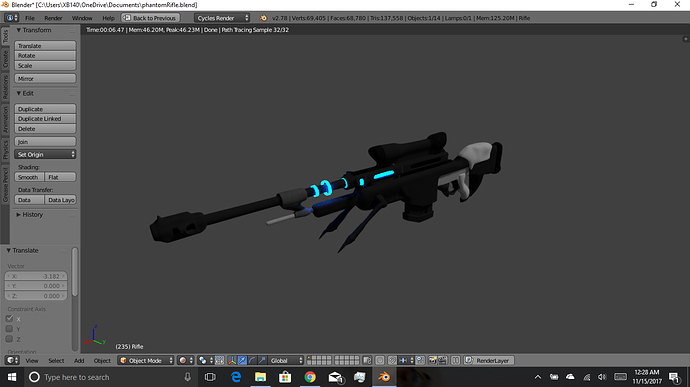 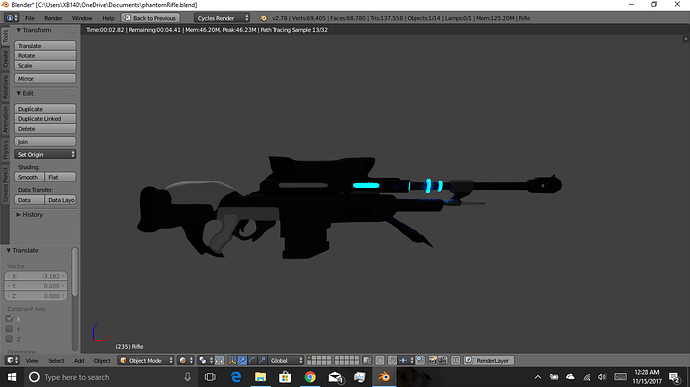 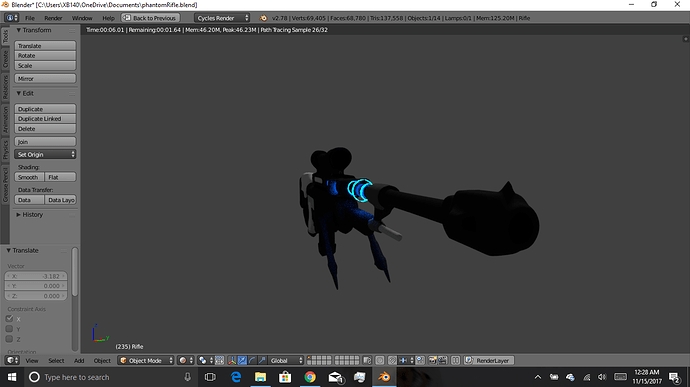 Also, if anyone could tell me how to use the camera/put it into a render scene for better image capturing (show it off on a background and capture the render within Blender rather than via print screen), I’d really appreciate that!

Just realized I can see how many verts and faces I have so far. Way more than I thought, but there is a subsurface view:2 modifier on it and I’ve only been working in mirror mode so far.
Guess this is why I gotta use retopos! I just tried posting this series of questions in the forums, but since I’m a new member and my topics have to be approved, I’ll repost it here:

Hi all, I’m new to modeling and I’m working on a large game on my own. I have a couple questions about getting models into a game (I’m working with UE4). I think I can easily figure out how to transfer the weapon over, but I have some questions about workflow leading to that.

Basically, my question is about texturing/materials, baking, and retopology.

I currently have a model made up of multiple objects, each of which I want to have its own reflective values (ie made of individual materials). I’m certain that, overall, I could have a single material/uv map that’s just extremely detailed, but I’m not at that point yet.

I looked at this for some guidance: Leonardo Branco is 2D and 3D artist with 18 years of experience producing art content for games. In this tutorial, he shows how to model,

I would be using Blender rather than zbrush or topogun, obviously, but my questions are more conceptual anyway.

So right now I have a model with 76k faces, double that for tris - but this is including subsurface view:2 and mirror modifiers. 77k verts as well. Any “sharp” edges I have, I’ve been cutting an edge ring and sliding it to the sharp edge, creating a bunch of doubles. So I think in the non-subsurface model, I can remove doubles and bring those down immensely as well.

Would a potential (good) workflow approach be to dupe my current model, remove the subsurface modifier, remove the doubles, and use that as a good low-poly mesh? Or am I better off committing my modifiers and creating a new one from scratch?

Also, in that link I posted, the model/render at the bottom appears to reflect light properly (after a few seconds of loading), but the shield still remains flat when looked at from the proper angle. Is this what I should expect with a retopology? Details that are essentially hinted at with reflections and shadows, but aren’t actually there?

Just trying to understand the concepts! Thanks

Just calculated it out - I think with the modifiers not applied, it comes out to 4140 tris. At least, when I select each object and go into edit mode, that’s the total number it tells me I have. So, is that a pretty decent low-poly topology? Or would I be more accurate retopologizing after I complete the detailed model?

Tried my hand with some sculpting and nixed it every time so far. I’m very conflicted with this model! Added some new stuff though and have been playing with textures, learning a bit here and there. Still need to probably make a low-poly model if it’s going to make it in-game. And if anyone has answers to my questions, I’d really appreciate them! 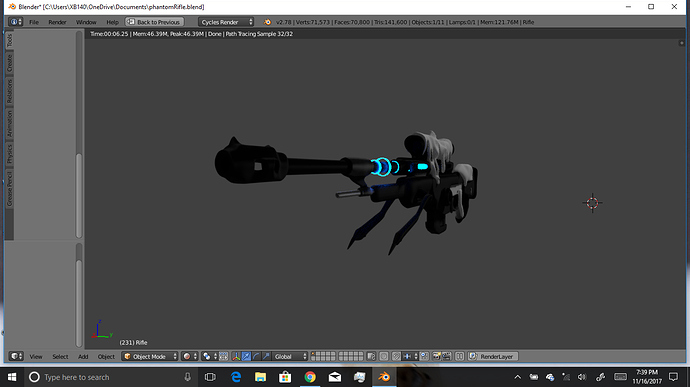 Also, I wrote out this comment on UE4 forums, but I’m trying to figure out the answers to my questions on all fronts, so I’ll add it here:
Bumping for clarity. From what I’ve been learning, it seems like a good workflow would be to make a hi-poly model, texture it however I want (with the individual objects being made of whatever materials I want), create a low-poly model, bake it with the hi-poly model’s properties such that it has the appearance of being made of whatever materials I want, then transfer that low-poly model and the according material maps to the game. Then if I wanted to change the coloration/texturing in the game, I’d just need a color map and a way of changing between the maps, but I’d keep the other maps (that determine reflection, refraction, transparency, etc) the same. Sound about right?

Okay, pretty excited about this! I got some textures from poliigon and figured out how to take the renders! Having trouble scaling the carbon fiber texture down, and didn’t mean to put it on the side nodes, but I got that new principled BDSF shader and it made my life a lot easier.
Looking half decent now 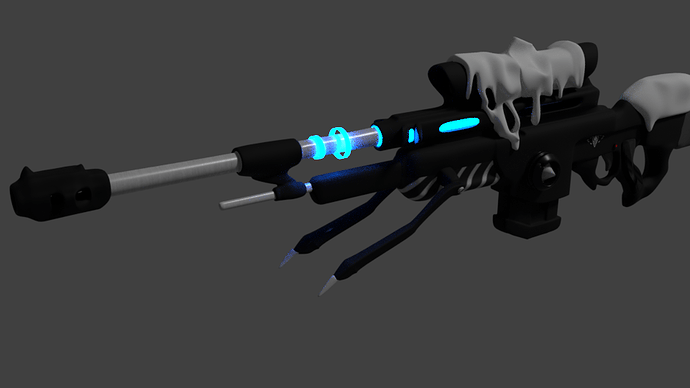