Thank you all for the comments!

DL007: you convinced me! I’m going to definitely give it a bash, and since it’s your fault, I’m gonna expect loads of honest crit’s and help:D

BTW: since the enemies are so small, will you have any bosses at all, or even harder variations of the origional alein? Maybe have them all come together and act as one for a boss. Just an idea.

There’s a whole story behind it but basically it’s flying saucer shoot em up. All the player will be the same size, all small so they can fly amongst the furniture ect. There will also be ground bases to destroy, I’m going for simple fun here, nothing to grand (for now anyway). I’m starting UV Mapping today so I’l have some stuff to post later. Will also be creating a WIP and asking for help.

Ok, spent an entire Sunday trying to find the right style, in the end I have come to realize that my texture/material ability’s suck! So, I’m going with a ‘toon style’ (well as close as I can get anyway). The picture below is material with no texture, and only AO. I’m going to add a bit of texture though, but very light so it’s hardly there but does make a little difference. 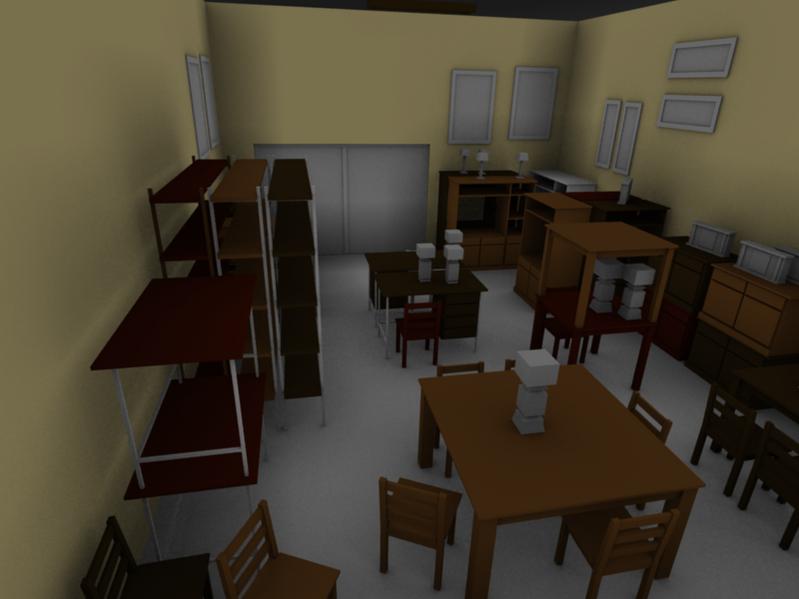 You do know that renders and In Game shots are completely different? (Just telling you)

WOW this is really good! I wish i could model interior but I suck at it.

Great work in your first post I thought your were just a noob trying to make a game that will never even finish but so far your doing good with the models and I like them. Hope the finished product is as good as your models. Sorry but I dont know any good tutorials on what the difference is because I dont really make games completely in Blender(well I dont use BGE much) and I mostly use irrlight,irredit and c++ to do the job. Can you post the pic of the in game screenshot anyways so people may help you. I know your busy with this but well you be able to help me in a project of mines(Arleady have a running walkable game).

If I can help you Abdu, then I will. Just let me know what you’re after. As for screen shots, I will but I got to try improve the lighting a lot. I’ll post some shots on Tuesday, tomorrow I’m off to visit a submarine.

OK thanks I will appreciate your help and I will send you a private message(if you don’t mind) so I don’t make this topic go right off topic and start talking about my game project.

Well, try it out for yourself. press alt+z in object mode to switch to texture draw type then go into your camera and press P. The texturing in the GE is different, you have to use UV maps instead of the normal blender textures, but GLSL seems to making use of them now, I’m not sure since I don’t have GLSL.

They don’t need to look different. If you bake the AO and textures you can get a reasult that looks very good in the game engine, and now with GLSL you have a bunch of other features that will improve realism.

If you doubt it is possible just take a look at some of endi’s work.

Ok well I guess I get to learn UV mapping, backing and the other thing you said. Thank you all for the comments, with any luck I’ll have the new pics up soon.

Abdu: No problem, just let me know what you want, or should I just do a bunch of stuff and let you choose what you want?

Seriously that’s what I’l be aiming at.

Andrew101: Thanks mate, appreciate the hellp and comments.

Amazing work! I love it, how do you combind AO and textures like that to make the shadows?

Haha, dare I let my secrets out? Well ok, here’s the big secret…

Delete the lamps, enable AO, and sample at 10. That’s all there is to it. I do it this way only because I don’t have a damn clue about lighting (I’m still learning). But thanks for the compliments :eyebrowlift:

eigersa: OK, I have sent you a private message that I would like your reply. I could perhaps use some of your previous models but I was wondering if you could make new ones…Its really your choice if you have time. Anyways Hope you continue with this project.

Uhmm… becareful where you’re headed. If you’re using the Blender Game Engine, I believe the room set up you have now will choke it severely. Have you tried checking framerate with that many polys? And this is without any AI or python… Ok, here’s a hint. When you have really high detailed rooms, make doors. When you open doors, make it so that it switches scene. This is heavily common thing to do in the Gaming world. Make super detailed areas, but never connect them through walls. Connect them through logic bricks. Make seperate scenes for each room. If you need help with python and such, ask me. But yeah, don’t go for the everything in one huge map look. Usually this works for games like Apricot, because the areas or so big and spread out, you’re not really rendering what’s on the other side of the field. But in rooms, and dormitories, you have to be careful. I strongly suggest one room, one scene. Atleast, make it, 2 rooms 1 scene, if anything. This will make your game a lot faster. And, you can try and implement a LoD(Level of Detail) system, where you have ray sensors that detect disance, and anything beyond that distance is transfered to a lower poly model that you made. When the ray sensor is within distance, you do Edit Object replace mesh with High poly models. Lowest poly models would be planes, then simple primitives, then your high poly mesh. This is a great technique if you’re going to go at it your way even though I strongly suggested the my way. Take into account Blender game engine isn’t as powerful as so many would like to believe. It’s got HUGE potential, but yeah, just take it easy on the poly count. I suggest nothing over 20,000 rendered triangles per frame, at 30 frames per second. If you want 60 frame per second standard, try going with 10,000 rendered triangles per frame. Take my advice seriously.
Regards, H Y P E R R E A L

What I would do is since you seem to be designing this room based on rendering it out and adjusting what you see (rather than looking at how it looks in the game engine) that you keep basing your design on renders.

And at the end of you design process once everything is modelled and textured in the room, unrap every object, assign a blank image to every object and go to render settings and under the Bake panel bake the full render.

This will make what you see in the render (for the most part) appear in the game engine. This includes AO shadows and normal maps. This will also increase the framerate of the game if you use normal maps and then make your models low poly.

i think the different room different scene idea will work very well in your game because the prontagonist will be so small so you wont change rooms to often.

i still reckon you should go for realism

Greetings Eigersa! my name is Eager I have just entered the blender artist forums by accident, you see i was searching for some new and advanced blender’s game demo. Well I’ve red you are looking for some guys to help you out with modeling etc. I am also learning blender and it would be a great experience making your game with you. I’m non native speaker. I am also building my first 2d and 3d portfollio so I’m affraid that you can’t see them yet, but i do get free hours so if you give me your design that you want your game to have i can model it. I used to programme flash games by using (actionscripts) but never used python before and even my 2d games weren’t as good as what you might see online. If you need Earthing to help you then email me on this [email protected], thanx you for your time reading.