Some weekend fun. Sculpted yesterday and painted it up today. Still needs a lot of work. 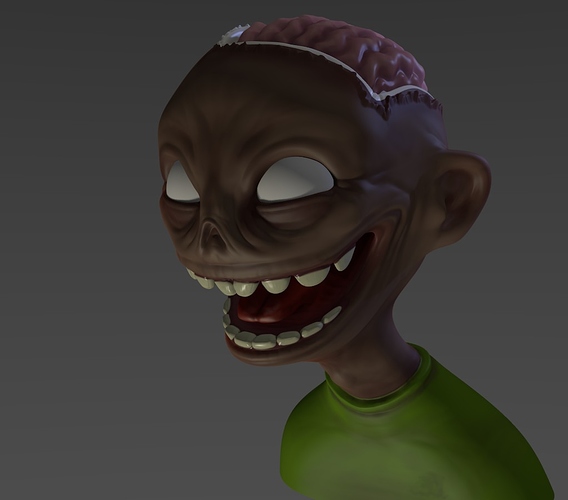 Working on his eyes. 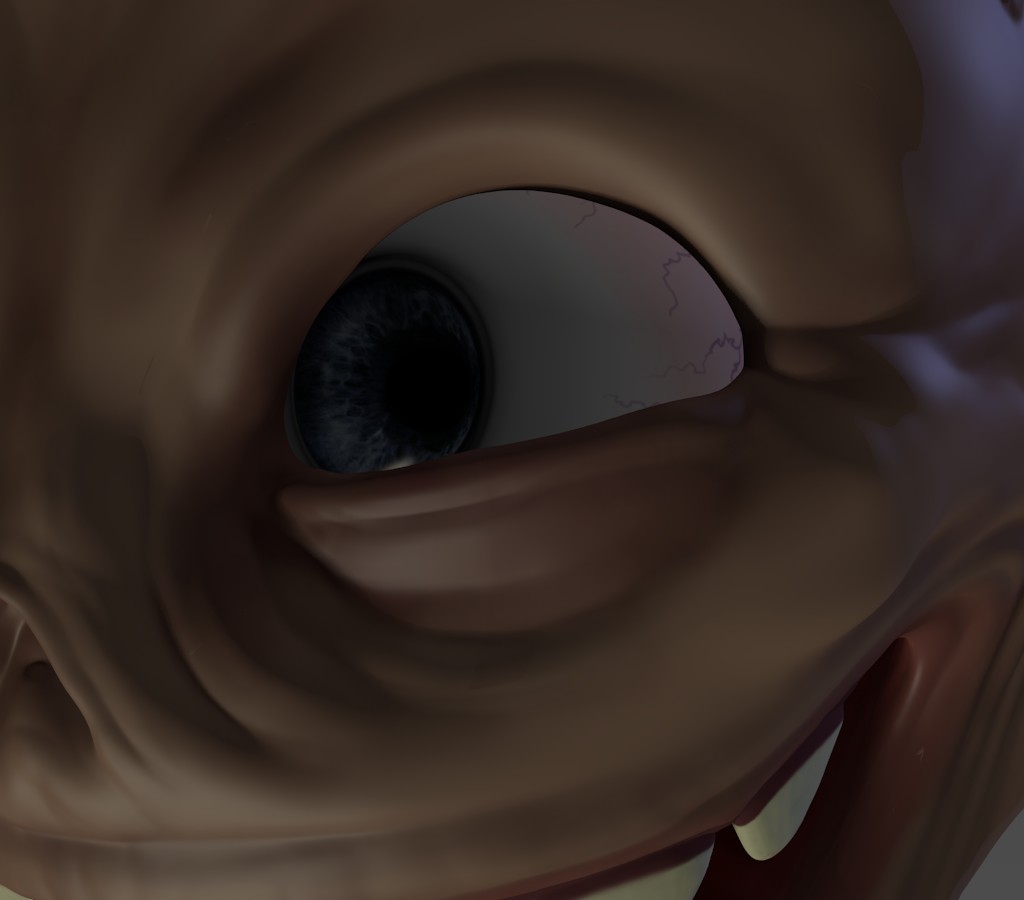 I think my laptop has a bright screen on it or something because the images above are very dark. I dunno… anyway, I finished the eyes and did some lighting today. 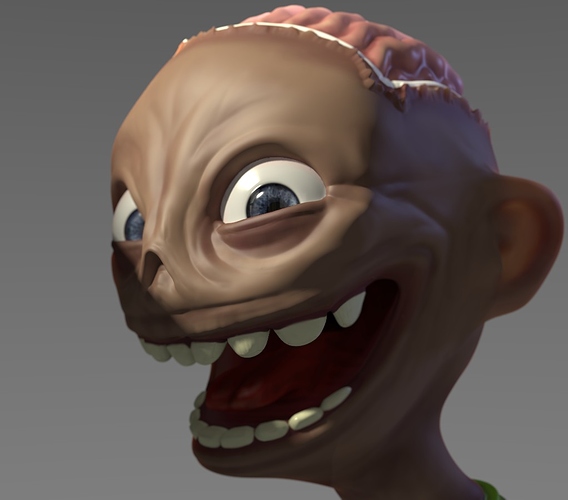 Anyone liking this thing? I’m not getting any feedback. :eyebrowlift2:

the sculpting looks pretty good - if you’re looking for critique, i’d suggest adding some horizontal creases across the forehead…try raising your eyebrows in the mirror like this guy, you’ll see what i mean

maybe you could add some blood textures too, blood dripping from the ear canal or something

This little guy’s got a lot of character. Just give some illumination into his mouth so that it’s not an opaque space, and then dream up a movie for him to star in.

P.S.: I rather like the basic lighting situation that you’ve set up here. It gives a lot of good accent to his eyes and generally presents him very well. (Well, “well to me, anyway,” because what I read into him is a certain amount of “don’t take this too seriously, folks” intentional absurdity which would make him a great character in a lot of roles.

The best way to balance the lighting levels in a shot is to measure them, e.g. with the histogram tool either of Blender or of a third-party image processing tool. Then, call to mind everything that Ansel Adams said about his “Zone System” and translate that to a roughly bell-shaped curve of lighting and contrast levels. This will help you quantify both what’s now wrong with the picture (“a whole lot of Zone-1”) and the effect of your subsequent adjustments. Furthermore, it will do so objectively, irrespective of your monitor and other equipment.

Absolutely… awesome crits by the way. I’ll look into his forehead… I shouldn’t have painted it so quickly but I couldn’t help getting into these cool tools (I’m very new to Blender). I LOVE the fact that it’s all in one program. I’m use to using Mudbox and Lightwave… which can be a real pain in the arse.

I wanted to get some sss in that mouth and rim it from cam left to accentuate that. He does need some gore.

I’m adding some gore in the form of brain fluids running down his head. I decided to use a technique I saw at Blender Guru… I’m calling it the Blender Guru Donut Technique.

This is super fun to do. I added a fluid emitter and am dropping sticky fluid down around the exposed brain cap area. Just from working with Blender’s fluid sim for the past 30 minutes… it seems FAR superior to Lightwave’s. 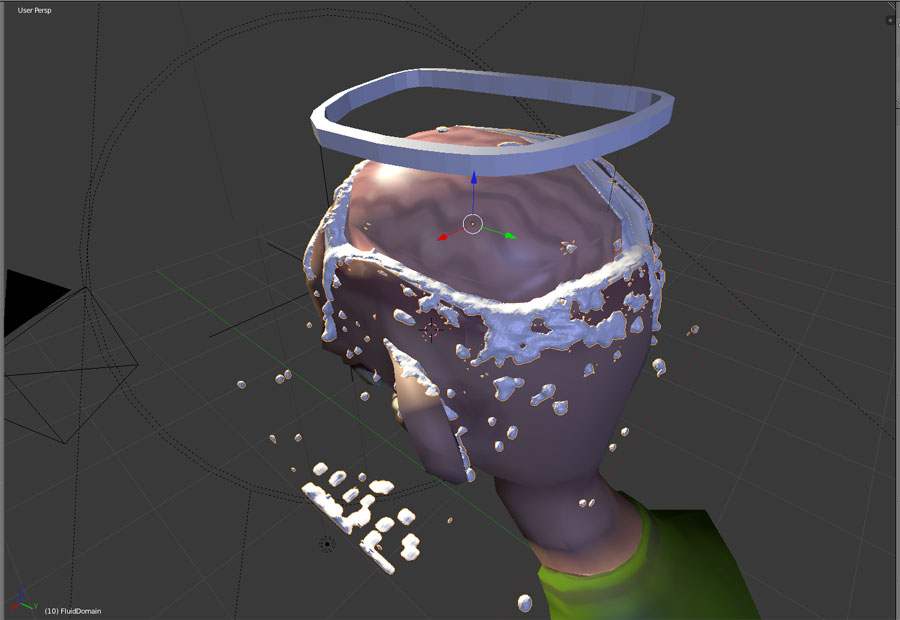 can you upload a picture of the fluuid settings please. whenever i try to do it it goes crazy

My Obstacle has Partial Slip set to .9 also… 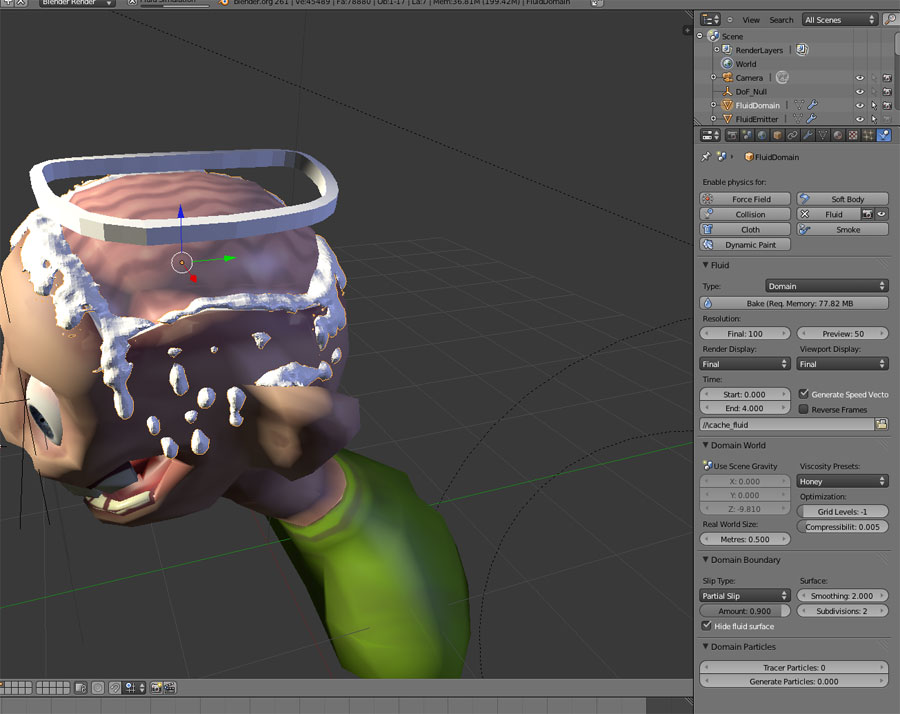 With some colorful gore… neat zombie, I like the big smile and brain… also nice work on the goo

what a cute zombie OMG hehe

Thanks! It’s my attempt to make a character that you don’t know whether to run from or to snuggle.

Ok… today I worked on his mouth along with some other material tweaks. I did the same BGD trick on his mouth. 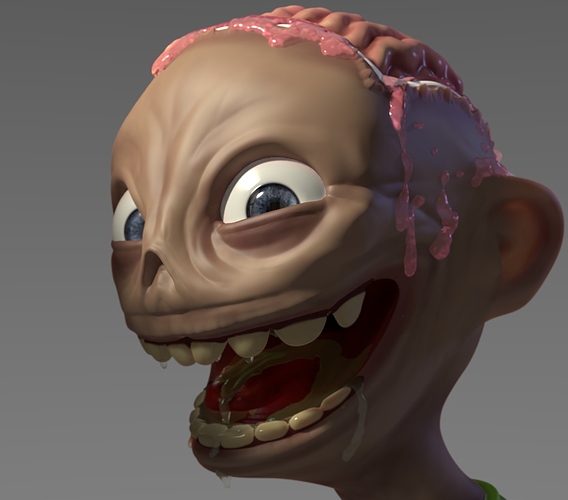 Horrible, but amazing. >:)
Nice zombie you got there.

awesome, reminds me of golem from lord of the rings hehe, this is one of the coolest ideas ive seen on here for a long time