Hello Blender users. This is a preview of my project that I have been doing. It’s simple, but I think it is a bit photorealistic. Post what you think. 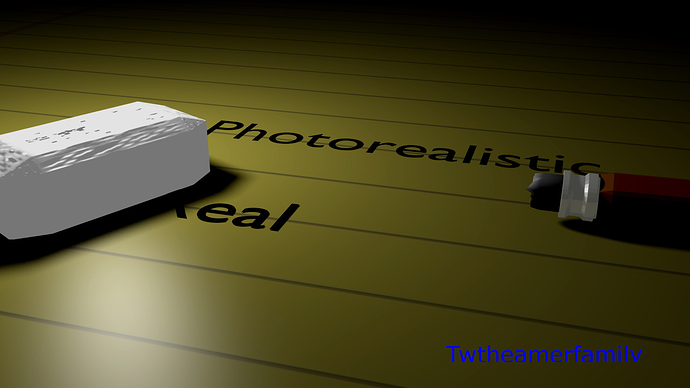 If this is your first model even or first photorealistic render it looks ok, but if not there are a couple twicks to make bump map for the ground texture. The photorealistic real title to remove, and the most important bit, blue colour? It doesn’t composite with your image at all. It’s awesome that you have put your name into it but I would recomment diffinatelly different colour that blue. In my opinion white would looks nice. If you don’t have a graphics tablet you should switch signature font style to something more suitable and smaller. If you do have it just make your own.

Is that Blender Internal!??

This is not what we would call a photorealistic project per say, but we all have to start somewhere.

You’d need at least global illumination - light bouncing of of the surfaces, preventing your shadows from being black -, more detailed modeling, textures and accurate materials in order to start speaking of photorealism (which means basically that it should look like a photography).

You’re off to a good start.
For increased photorealism, try applying a Normal, Specular, Diffuse, or Bump map. Always helps. You can add some coloured lights as well, and furthermore, you can enable Global Illumination.

And bro, check my PM.

Guys, the platform is not a ground, it is a notebook paper texture. So, bump map is not needed.

shouldnt a notebook paper texture be white? and paper isnt as specular as it is on your render. apart from that the other problems have already been mentioned by the others…

Guys, the platform is not a ground, it is a notebook paper texture. So, bump map is not needed. 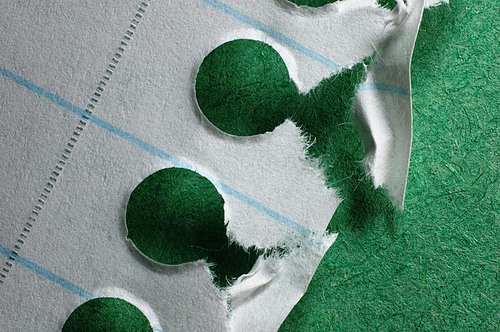 Is this a joke? Yes, we all have to start somewhere, but photorealistic? Really? Have you ever seen a photo? Or looked at anything? Don’t want to sound too harsh, but the above replies are being very diplomatic.

Is this a joke? Yes, we all have to start somewhere, but photorealistic? Really? Have you ever seen a photo? Or looked at anything? Don’t want to sound too harsh, but the above replies are being very diplomatic.

Because gentle folk here generally do not discourage man’s creative nature. Instead of playing hard-a** you could’ve provided constructive critique and advice. It’s usually helpful not only to the person you’re advising, but to yourself as well, because you come to weigh and value things you know much more.

@twtheamerfamily: If you’re targeting photorealism, first and foremost remember that nothing in real word is perfect. Any surface has variation. There are no clean colors, there are no ideal surfaces, there are no two identical objects. Chalk piece, while shows some detail, looks too blank. If you look closely at chalk you would see it’s grainy structure. You definetly should incorporate that (a simple noise texture applied as bump map is a good start). TheAlmightyF already posted awesome example of paper. Even if not bumpy, all paper has subtle detail. Take any sheet of paper and look closely at it: you’ll see subtle insets, strange-colored fibers, etc.
The pen: materials aside, it has too sharp corners. You’ll never see such in any real pen on pencil. You may want to bevel those somewhat.

Lighting. In your render you have (seemingly) one light source, which is a lamp. In real world, you have much more than that. Even in dark room with only one lightbulb you have ambient light (light bounced off of walls/surfaces so many times it seems it fills the room), you have reflections, you have indirect lighting, usually manifested in ‘color bleeding’ from one object to another, close one (basically, bounced light yet again). Since you’re modeling a (sort of) school, or study, scene, it’d be unlikely to have only one lighbulb. You’re more likely to have some windows, or a vast array of ceiling lamps, or whatnot. Now, you’re not obligated to model those after real life. Just remember that you need to simulate them by providing sufficient lighting. Lacking more suitable example, I’d advise you to at least look at Kent Trammel’s marvellous “realistic portrait” series at BlenderCookie.com: when he gets to setting up the scene and lighting, you can see how he ‘emulates’ light flow, all those dummy lights to represent windows, bounced light and whatnot…

Last, but not least: photorealism. Photo and realism. It implies camera. Camera brings its own distortions/imperfections into picture. At first, you may want to restrain yourself from simulating those, but later have in mind such things as lens distortion, chromatic aberration, lens highlights and so on. All of these things are easily googleable, so you can find much information on them, and there are plently examples here at BA and in internets.

Because gentle folk here generally do not discourage man’s creative nature. Instead of playing hard-a** you could’ve provided constructive critique and advice. It’s usually helpful not only to the person you’re advising, but to yourself as well, because you come to weigh and value things you know much more.

I agree, in some parts, however it is certainly not helpful to me - why would it be? Your example of valuing things more because of contrast is a banal argument in this instance, and an entirely selfish point of view wrapped in purple prose. Man’s creative nature! Please.

Sometimes, telling it like it is, and let’s face it, I didn’t do that, is more constructive than cotton wool. Maybe the definition of photorealism has been misunderstood by the post author? I don’t know, but at least I did not assume that he/she did not know that light bounces, or that school rooms might have multiple light sources (such as vast arrays of gas lamps!?)

That said, the rest of your advice, is of course sound. and I concur.

@twtheamerfamily: Researching you subject is a good place to start. Look carefully at real world examples of what you are modelling to ensure that you understand, at least superficially, what the object looks like over a range of scales. Notice how the light shining on it reacts upon hitting the surface, and compare this to other, different materials. You could also look at other peoples virtual versions to see what others have learned before you.

Once you have a model and materials, think about lighting the object in the setting you have placed it in. Good lighting can be tricky to obtain, and cause render times to rocket, but it’s well worth it. I can recommend familiarising yourself with the three point lighting technique, and this tutorial which I found illuminating. Ha! http://www.blenderguru.com/videos/mastering-lighting/ Remember, though that lighting cannot make a bad model look good. Work on your model first before lighting it.

The compositor is invaluable for creating a photorealistic look, and this should be used once you are happy with the previous steps.

Lastly, it looks as though you have used Blender Internal rendering. I learned the BI method first, and have since switched to Cycles. Looking back, although the BI method taught me some of the basics, I think those fundamentals could also be learned through Cycles directly, without the need to learn BI as well. There is a certain amount of crossover, but many things are dissimilar, such as the thought process, the interface, the tools, the way you construct a realistic material, and the terminology. You will achieve a much higher degree of realism with Cycles, so my advice would be to switch now.

I agree, in some parts, however it is certainly not helpful to me - why would it be? Your example of valuing things more because of contrast is a banal argument in this instance, and an entirely selfish point of view wrapped in purple prose.

No it’s not. Playing offensive without argument (albeit one that can be implied) is.

(such as vast arrays of gas lamps!?)

Err… Did I say that? Yes, I did! I meant ceiling lamps, dunno where “gas” came from. I must’ve been distracted or something.

Guys, I can gladly accept people’s critical responses. I am seeking for development, and I have one! I started using Blender recently, and this render was like a test by me of the software.

twtheamerfamily, please add me on Skype. Check my signature.