The scene is named Balance Beam Dance Room, which is a poor direct translation from its Chinese name(Alright, I speak Chinese). Wish it could make sense.
The original story/scene was from my dream several weeks ago, where people/friends hangout here and play dancing. Yes, PLAY dancing. One person would take the lead, and others would follow all the dance moves he/she made. So whoever fails to follow might fall down to the pool and thus lose a turn. The beams are there for people jumping from one to another. In the original story there was less gravity so it was possible that people jump that high and that far towards another beam.

I was trying to recreate a sense of realism, basically as close to the original dream scene as possible. I have to say the final render does turn out to be quite close to what I saw in my dream(despite the girl, who I added just to make the scene more alive). However, I still feel the scene and overall lighting are not fantasy enough to create an atmosphere, thus making it doesn’t look so CG Rendered.

So please give critiques on the scene and how I could make it more atmospheric.
Thanks! 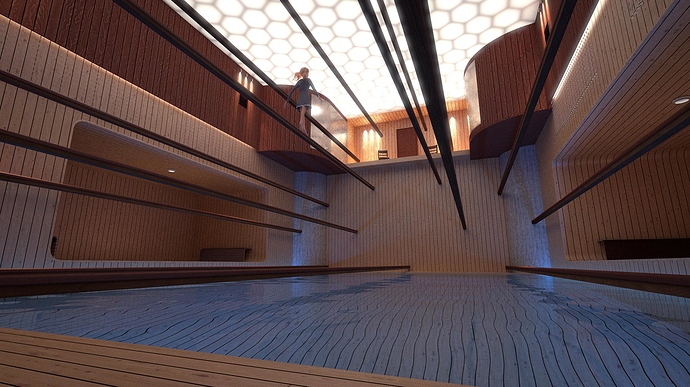 I think fluffy is the word you need. Dreams are mostly not focused in/to perspective…I think you could focuse more on the girl and blur out more the rest. Its a great thing to rebuild dreams in 3d…!! dats not easy. Maybe you could try to tell more with:

Welcome to the forums! I like the idea and design of the scene, it definitely inspires story and background and I think you need to use this allot more in the scene. Portray her feelings in this scene, is it dramatic and scary or is she gracefully navigating along the beams? I’d also recommend putting more emphasis on her as the main character, she gets lost in the scene due to a few factors:

Here’s an image with some changes made to scene to make it more atmospheric! 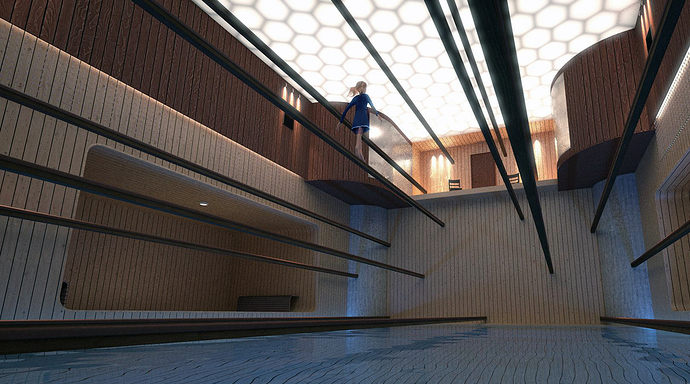 And in comparison to the original

I hope I helped!

Thanks for your opinions! That’s really helpful, I have been thinking about making things more focused. Sometimes I feel hard to decide which to keep and which to drop.

Thanks! It really helped a lot.
I now see framing is really a problem and I need to work on it.