I’ve been working on a skeleton. It’s rigged, though perhaps not the best way, since I’m not an expert in that. I made the various bones from pictures in Gray’s Anatomy, so I think they are roughly right. It wasn’t so easy to find out how the bones fit together, or their relative sizes.

My main problem is the ribs. They are obviously the wrong shape, but I can’t work out what’s wrong with them. Also, they move really badly when I pose the rig. I could really use some help to improve them. The .blend is at www.chatburn-weather.co.uk/blender/danse_macabre/skeleton.blend (if I’ve got that right).

By the way, if anyone can make use of this, please feel free. Though if you make any improvements (and there’s plenty of scope!) it would be great to get them back. 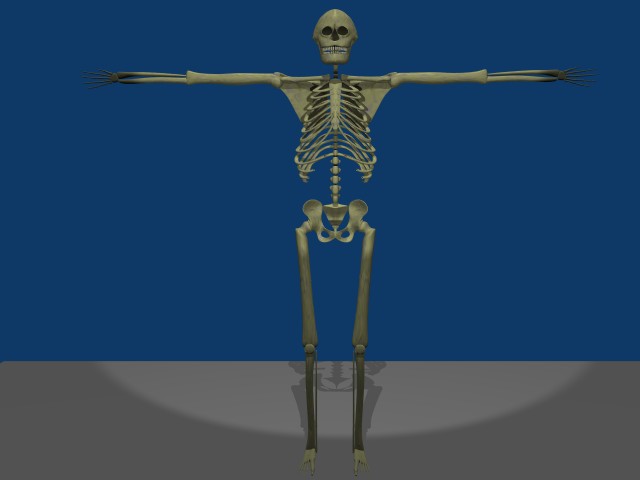 This is questions about modeling and modeling tools. If you want to put this somewhere, put it in one of the project forums.

You have more then just the ribs to be concerned with . The head is off-shape (looks too pointy) and the bones of the extremities are too blocky (they are larger at the ends and taper in the middle) and in general almost none of your bones are anatomically correct in detail .
But since you were worried about the ribs I marked up a rough shape you might want to follow in a screen shot along with a couple of other major bones which are incorrect .
For the ribs:
from the front view : the most important thing you are missing is the inter-costal arch - this is a series of cartilage that defines the lower portion of the ribs from rib 6 to rib 10 - and yes it usually looks like an arch . And in general the outer curve that the ribs indicate also has an arch to it almost like and egg with its pointed end upwards . Also the clavicle (collar bone) is too high .
from the back : ribs 11 and 12 do not connect to the main body of ribs in fact they “float” in the muscles of the back . Also at bottm is a rough shape of the ribs from top at its widest point (usually @ rib 7) .
from side : you need more volume - push out the sternum to about where I have drawn it . Also the ribs do not curve up to attach to the sternum - when looked at from the side they seem almost straight and “radiate” towards the intercostal arch .

For the hip bone : in general it is too small and the socket for the femur is too high .The top part of the hip bone (the illiac crest) is almost twice the size of the lower part .

For the shoulder blade (scapula) : the biggest thig you are missing is the spine of scapula anatomically - that is the part that actually makes a socket for the humerus - it attaches to the clavicle in the front - so your upper arm bone (humerus) should be below that . And it tapers out of the face of the scapula at almost 90 degrees . And the whole scapula rotates by the way - around 30 degrees max from its rest position (arms at side to max of arms over head) - so you should give it a tilt of +10 degrees in that T pose . 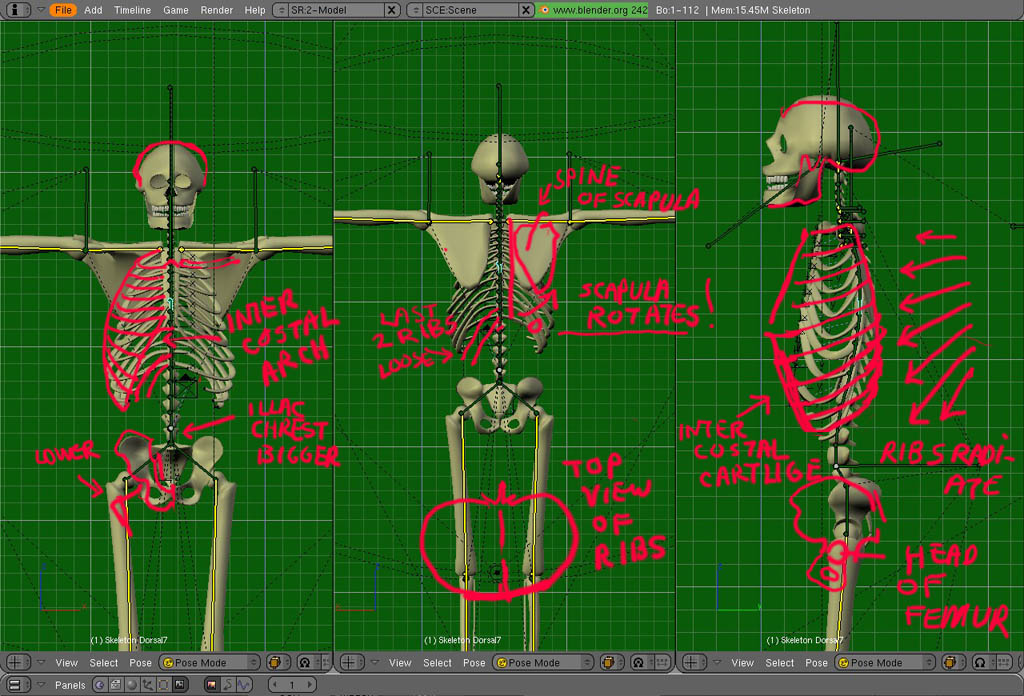 (I got the bone names from Gray’s Anatomy, so maybe “dorsal” is out of date? Or a UK/US thing? “Thorasic” makes more sense, at least to my limited knowledge.)

Oh by the way you might try using something other then Gray’s Anatomy for referances . While the enravings are quite beaurtiful and all, because of the angles chosen by the engraver in some of the referances the images can be misleading - I’m thinking here specifically about the pelvic bones - it seems they laid one side flat on a table without regard to how it is as a joined structure . The pelvic bones have a pretty complex set of curves when joined together in the body but the engravings in Gray’s Anatomy (because it is shown like a part on a table) shows a visually misleading representation - I know from experience - I also tried using those as referances and got frustrating results .
Peck’s Atlas of Human Anatomy for the Artist is an excellent referance book you might want to look at .
Good Luck