I am sad to admit to myself that I have, for once in my life fallen among the stereotype. I am modeling a “space ship.” and so I think to myself: what a noobish thing to do. (and : “what a wonderful world”)
so here I am. this being my first serious model, and I don’t know about all of you , but I think it could use some help. SO!! any suggestions or pointers will be aprechiated and taken under consideration.
so long and thanks for all the fish. (indeed)

PS. I also need to appolagise for the randomness of my personality.

so here they are in all of their glory

That’s a good start. The sharp parts of the mesh look strange. Put additional edge-loop there perhaps or clean up the mesh? Perhaps there are triangles causing it?

The cockpit doesn’t fit the vessel seamlessly though it may be on purpose.

What kind of ship this is going to be? What are the blades for? They make the ship look sinister and stylized.

Let me guess, this is a boarding ship. It’s purpose is to ram with those blades to the enemy ship and then assault it though there’s no seen mechanism to let the assault troops to move into the enemy ship.

Hmm … the blades are actually deflectors? They help to repel enemy laser beams and such? Though they could be a weapon instead.

The point of this was to encourage you to write about the ship. Make specifications for it so you get what to model. This can give you ideas about details to add, how to texture it, what kind of scene to make etc.

Make multiple versions of it and pick up the most pleasing and continue to develop it till you are happy with it.

first: I thank you for your speed in responding.
next: the sharp parts on the ship are caused by my using subserf, and then using shift+E to change the affect of the modifier on those edges. I tride to use loop knife cut (that is what you suggested, is it not?) however it would not allow me to cut it close enough to be effectev. any suggestions on how to get rid of that bad looking edge?

no it does not, and no it is not intentionel. I personaly don’t like my entire fusalage (well, I don’t “LOVE” it) any thoughts or suggestions on that I would like to hear.

What kind of ship this is going to be? What are the blades for? They make the ship look sinister and stylized.

The ship is intedned to be a small, one man, short range fighter (as you can see I have not added wepons yet) it is still a developing concept.
the idea is that many can be lanched from the “carrier” for combat near the fleet. a modified version will be made with less ammo/weapons and a larger fuel tank for long range patroles.
and also: blades? what blades? thus far all design on this fighter is more decoration for that

sinister and stylized
look, so far they serve no practical purpose. (if their any suggestions, please, do not hesitate to offer them)

The point of this was to encourage you to write about the ship. Make specifications for it so you get what to model.

I like this idea. please ask any questions concerning the following:
as I said before, it’s design is a small one man fighter, that can be modified to do many different things. I also have designed another (smaller) ship that has simaler charicteristics, the plan of which is to be a scout. I was thinking of adding a few missile tubes on the bottem of the fusalege, and dule Laser cannons on the flat/sharp edges on the front end of the wings.

the whole idea for the fleet is that (subject to change) it is an alien fleet that is moving slowly through space distroying almost everything in their path (classic eh) directly in their path is earth. We find out about them by accedent. an experiment is being done to test a new concept for “faster than light travel” (at least thas the name the scientests are giving it. most of the “Earth Defence League” just call it warp drive. wahoo)
when the test is run, the small one man science craft (outfitted with the prototype) makes a succsesful 20,000 lightyear (approx) jump to the vacinity of Perseus Arm where he sees the alien armada distroying (and harvesting the resources from) a small solar system in that area. after preparing the ship for the jump back to earth the pilot watches as the fleet destroys the sun of that system. upon returning home he in forms earth of the comming enemy, and they begin preperations (it wasent that simple, but thats the long version)
and thats as far as I am. it still needs alot of work but it’s comming (the gaps in the story are just the deitails that I left out)

so my ultimate plan is to animate this entire story through a series of short animations.

I think that you should make some sort of schedule and set up some goals. It could something like: XYZ-ship finished by XYZ-day. It doesn’t have to be too restrictive but it’s something to keep you going on and it keeps you motivated as you achieve those goals you set.

Keep it simple at first. You can always enhance your models and animation. That way you get visible results faster and avoid frustration. And as a bonus you will see how your idea works in practice and thus you can make it even better. -> new ideas.

thankyou for the schedule idea. I think I will write one of those out soon. but right now I have one more week of classes and then finals week, I will then be out of school for a semester. but untill then I dont have much time for deep planning. but I will set one goal: I want to have this ship modeled to the point of “near” compleetion and have a plan for how I’m going to texture it by the end of the semester

and now if any one has time, I would like some more help on the things discused in my last post. (about ship design and function, tha kind of thing)

I’m tired and lazy, so I haven’t read the other responses very carefully, but some of the mesh looks messy… perhaps post a wire?

I like the basic shape, but it’s much too smooth right now.

I have never found shift E to be of much help, You will get much more control with edgeloops. It’d be easier to crit if you posted a wire maybe?

ok so heres a “wire”
also: edge loops? I am not familler with that term 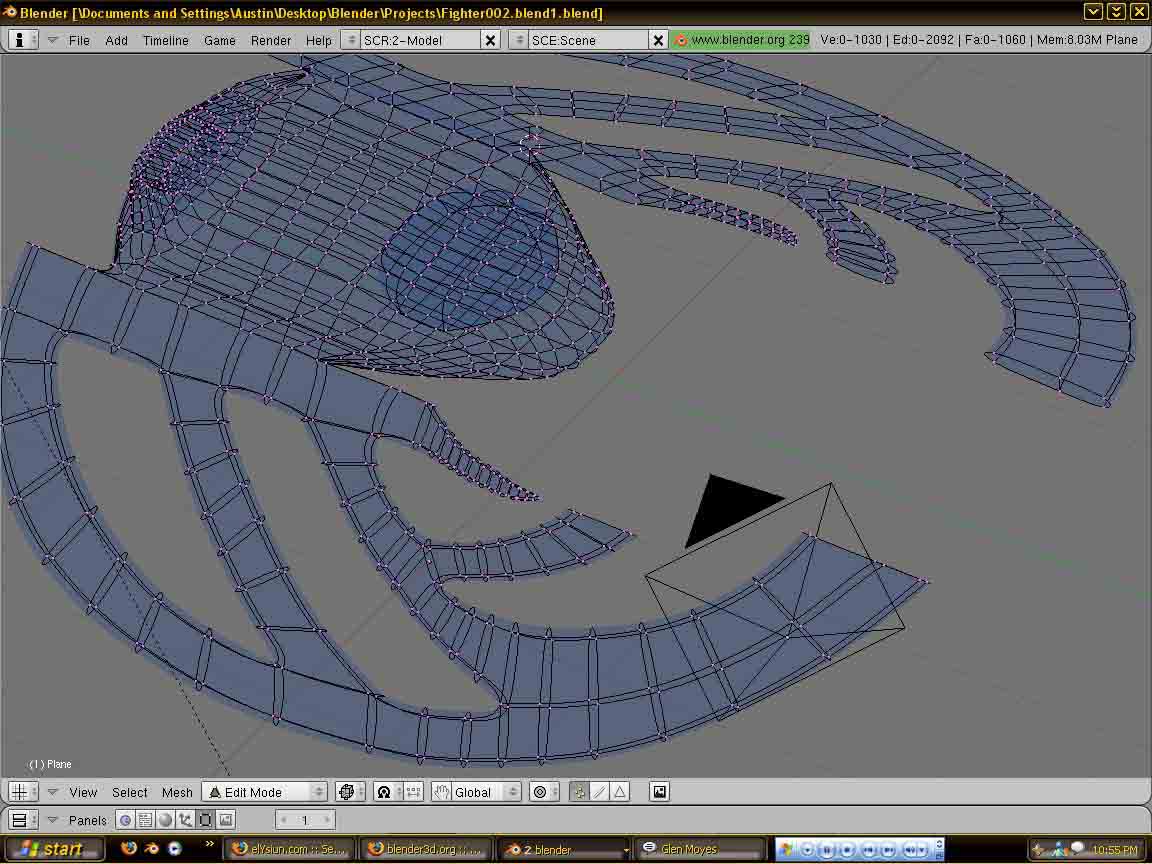 model looks good…I think your on the right track, no crits here

Still lazy and not reading the replies.

I want the edges to be rounded like they are. so is their some way to accomplish that without using subserf? 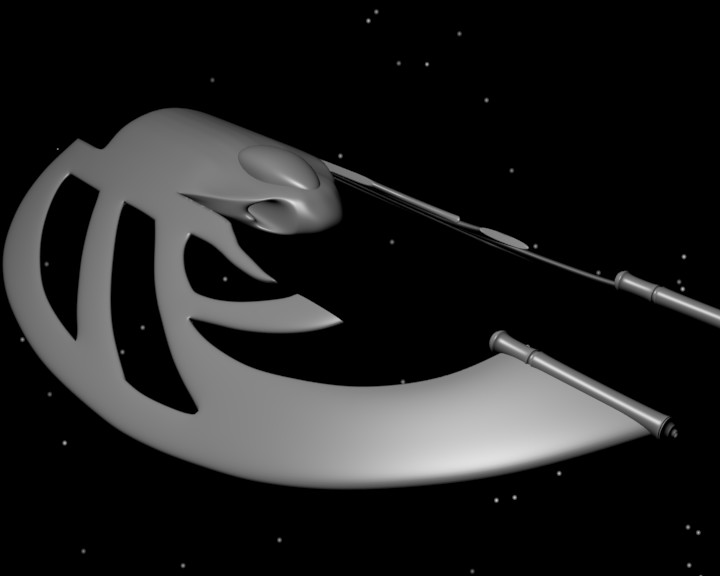 From what I see there isn’t any source of propulsion. I would add a visible source of movement wether it be a small long engine or a large rotund one. 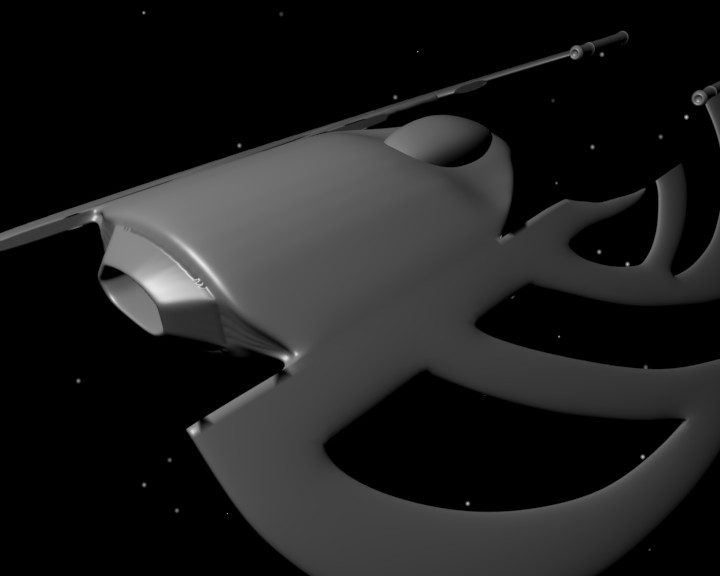 so heres the newest addition to the project (if one can call it that) it’s a Carrier. it is for the transportation, mantanance, and launch of the fighters (and maby other small space craft)

I am having a problem with the mesh as you can see, there are those ugly dark spots on the inside corners of the hanger bays. when I used subserf to smooth out the fusalege it messed up the hangers, so to get the desired effect I used shift+E, but as you can see that looks horable. so my question is: how can I get that same shape without using shift+E?

I am also having a problem figuring out what do do with the back end. I would be thankful for any suggestions. 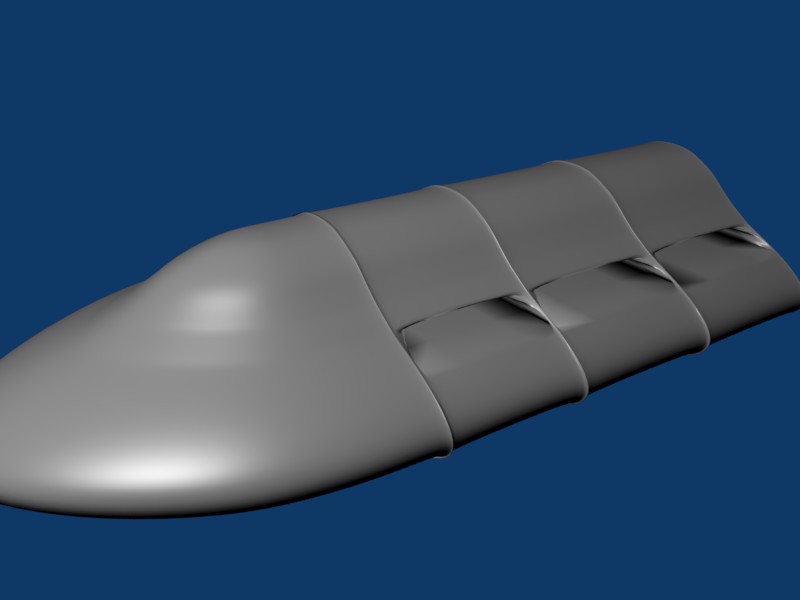 A wire image would be more helpful in figureing out how to fix that particular problem, but if you are using subsurface, seams are really your best option, or you could add a very close loop to each side of the angle to make it sharper. Also make sure your normals are all facing outside. And don’t “set smooth” the places that are flat or your walls, just the specific areas you want smooth, that might also help it a bit, but I can’t be sure. Hope some or all of this helps.

ok so I finaly have something new to post (the funny thing is, I did all of this in about an hour. it all took so long because I diden’t blend AT ALL! between now and when I posted the last one)

so this is it for the carrier so far. I’m still haveing issues figuring out what to do for the propulsion. (suggestions please)

also: am I going to have MAJOR issues unwraping this model? 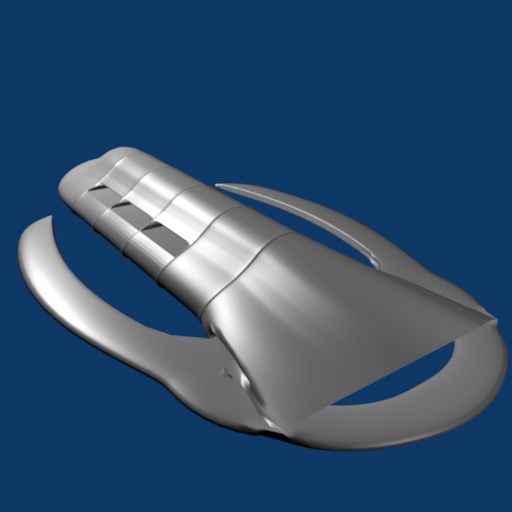 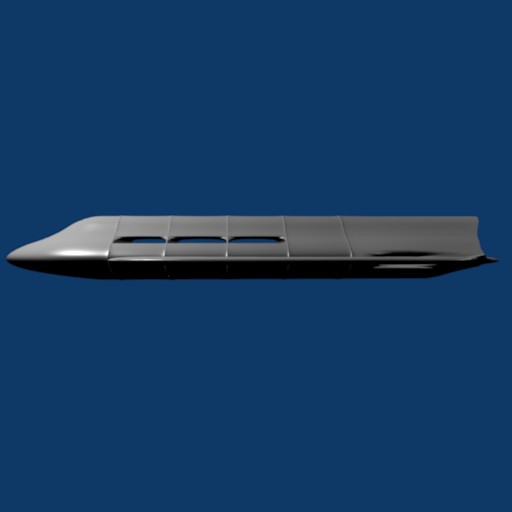 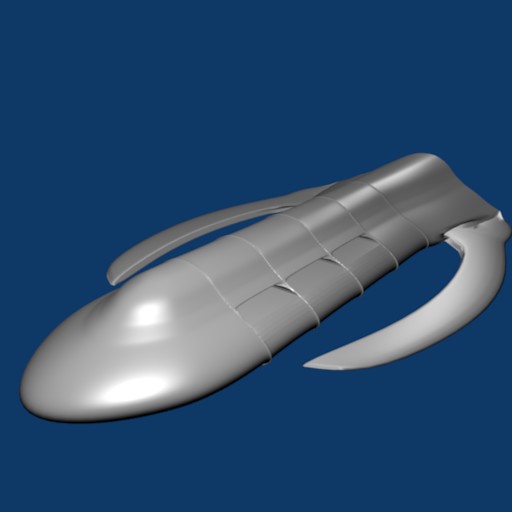 Mount some kind of engine to your wings. Right now they have no real use it looks like other then for looks. Unless of course you plan to mount weapons on them.

Explane (I’m not quite shure what you mean)

He’s saying the wings appear to serve no purpose. They aren’t holding any engines or weapons.

They would still be useful if it does atmospheric flight.