Maybe such a thing as a combination would be possible. Not sure though if I get around for more. Seeing your cockpit up there I remembered that I wanted to do this once. Picked it up and plugged something together. I have not the slightest clue how they look like ( never seen such a toy not the tv shows about it ) so I went about imagine how I would design such a cockpit if I had been given the task to do so. Feel free to fanboy me for it :o. As mentioned somewhere above one of my ideas had been to use this model once for an in-game cockpit test ( in general to see how my engine copes with this ). So I also made some “piloting render” test. I really need some background for this to get a better idea. Like the last time only a link to not hijack too much ( images ). Some details can’t be seen here. The joystick things are detailed too with grip and stuff like that but the clumsy test-dummy clobbers them up :p.

Thank you for making the images a link. I wouldn’t have minded too much if you’d posted them as attachments, but am glad you linked them.
To be honest, I never watched the anime either. It wasn’t popular enough to make it to you tube.

All I collected were the model kits. You cockpit looks as good as any to me. Also, I’m modding the zoid in a way that is not dependant upon the subsurf. Meaning It will be GE usable.:yes: (to a limited degree of course) So in-game cockpit tests wouldn’t be impossible.
Your cockpit renders look good. I’d add a lot more buttons and screens. Just to make it look professional.

Use of SubSurf doesn’t mean it’s not suitable for a game engine. In fact I always use SubSurf for the high-poly mesh and then ReTopo it down to a low poly one ( which I’m doing right now to see it would turn out once finished ) with a normal mapper applied to it.

What goes for the cockpit it’s not finished yet. I had in mind putting the buttons next to the joysticks ( only visible if you turn your head around ) so that they are easy to reach since if I noticed this correctly they all wear seat belts ( noticed this in some avatar some guy at another forum has ) so reaching forward to the controls could be cumbersome

Your particular model though has something interesting due to the entire cockpit situation and this is that ( if I understood this correctly ) the cockpit is located behind the actual head. With other words you should be able to see this head ( and other parts of the zoid maybe ) moving around while using cockpit view. Should be very interesting to try this once out as a sort of proof of concept :eyebrowlift:

Your particular model though has something interesting due to the entire cockpit situation and this is that ( if I understood this correctly ) the cockpit is located behind the actual head. With other words you should be able to see this head ( and other parts of the zoid maybe ) moving around while using cockpit view. Should be very interesting to try this once out as a sort of proof of concept :eyebrowlift:

You’re right. This is what the zoid will look like: 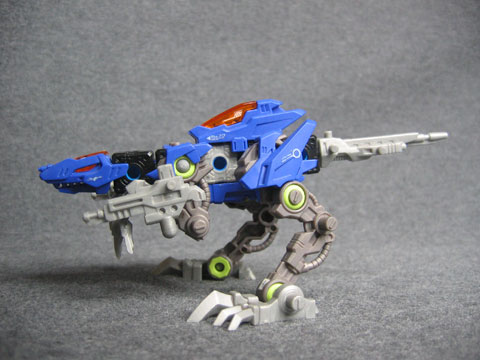 Also note that the color is bit of a different hue. My version is far more purple. And I think the guy that took this pic put the guns in the wrong place.:no: Oh well. Now you kinda know what I’m aiming for with the end result. Do all my proportions seem correct so far? I will add stickers with the texturing. 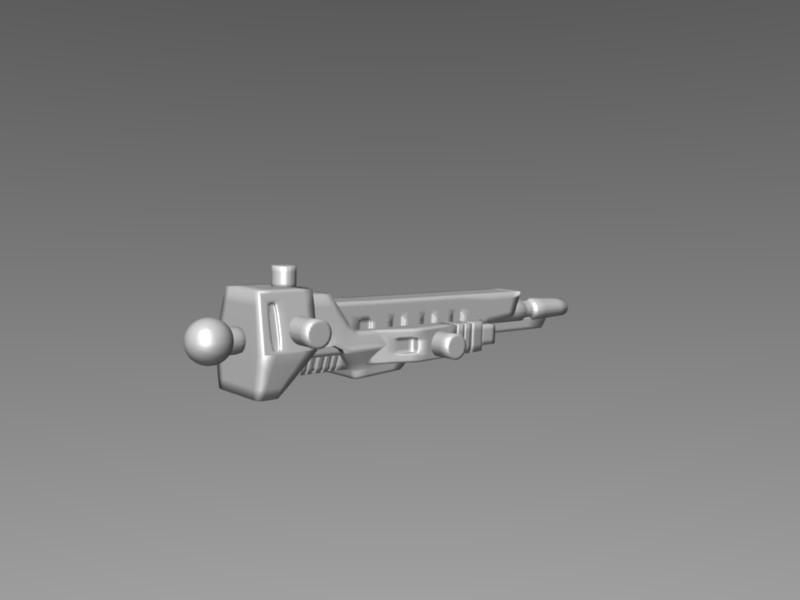 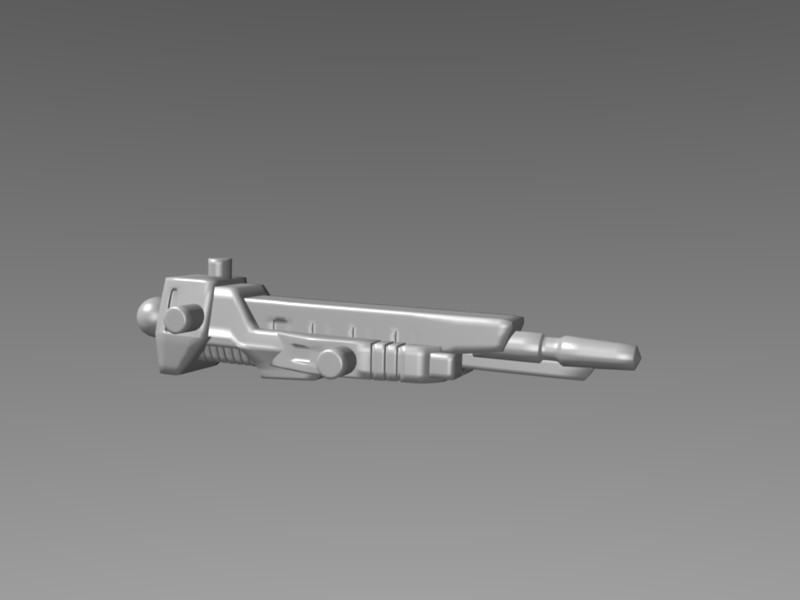 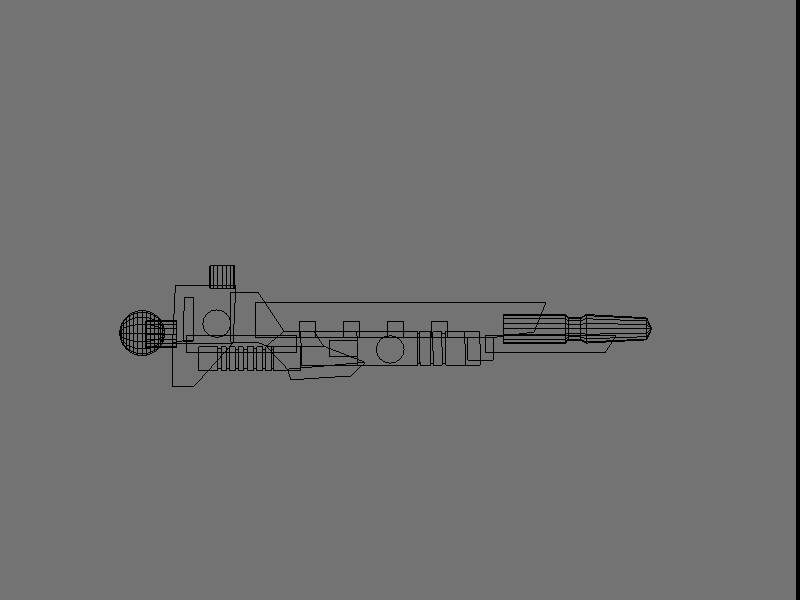 And a view of the tail included with the rest of the model: 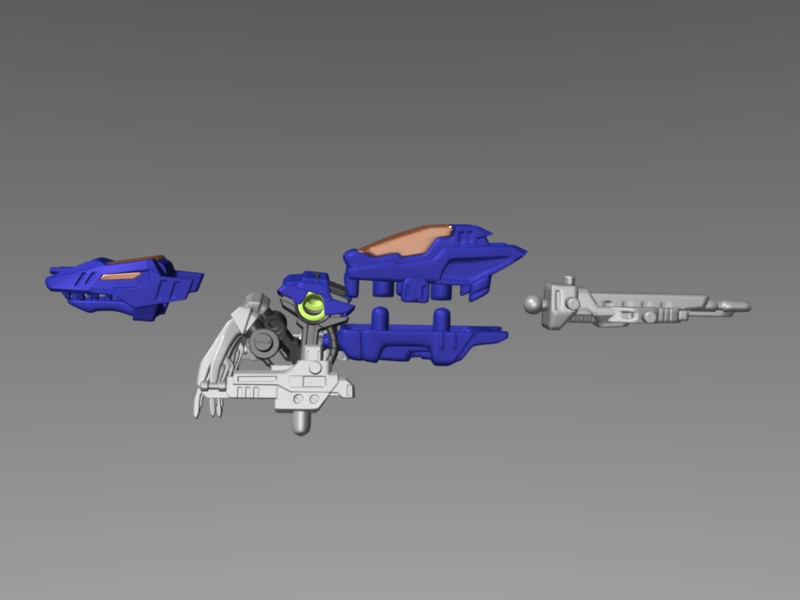 Any crits, comments, or observations appreciated

As the title states, I’ve decided to try my hand at some blox: 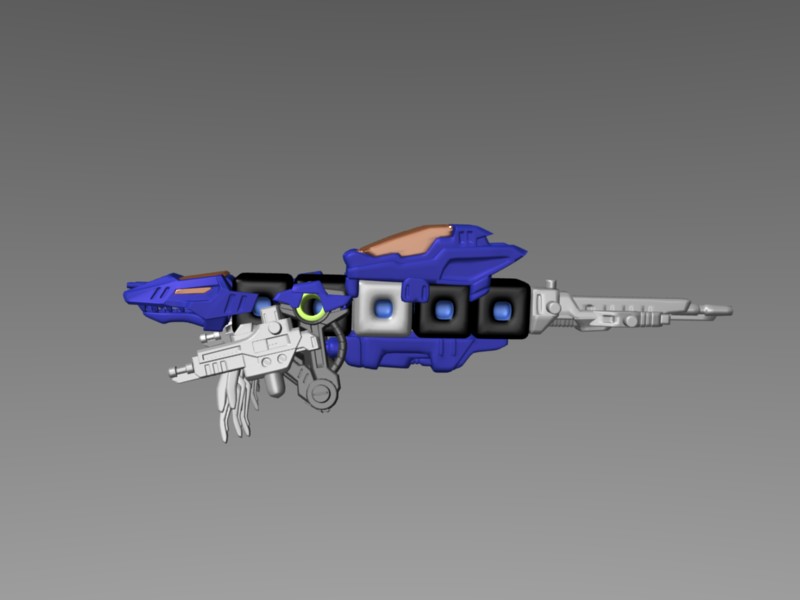 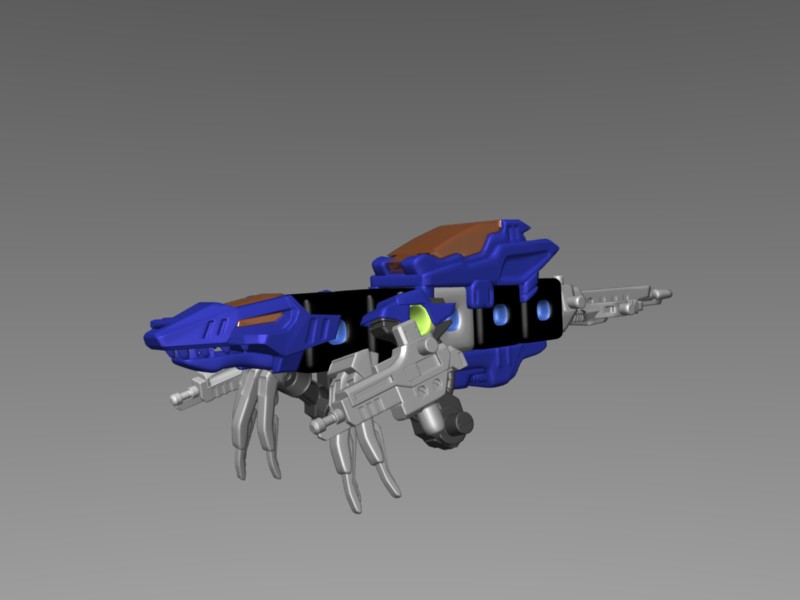 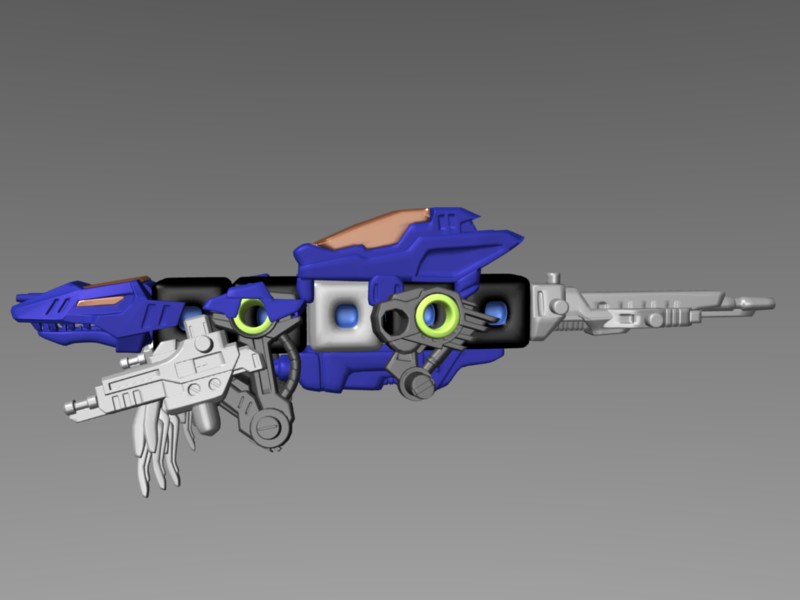 Played a bit around with GIMP to make some display images. Two images in the above image location show them. Took an NDS game as inspiration for doing them

. What you think about them?

What goes for your model… comes along. You really want to bump map the stuff in instead of high-poly and then normal map it down? It’s just that for mechanical models using bump maps could be more of a hazzle than doing some proper high poly.

I like the screens. They look really good. Did you make them yourself of are they ripped/taken from some zoid fansite? I can’t tell.
As for high poly… I might. My compy is already getting a workout whenever I open this project, and if I go all high poly…could get really annoying. Is there a way to show one (low detail) object that you animate etc. and then have it render a higher detail one? That would really come in handy right about now.

I made the screens all myself. The gun I found on the internet and fiddled it in there. Once you have a modeled one it can be replaced. The same goes for the zoid status. That’s also an image from the web I outlined and partitioned. Once the model is finished I can outline render it to get a way better status image. This one here is a bit meh since it’s not a full side view but slight 3/4 so the body color keying is not as visible as I hoped in the first place. But I guess you still get what the idea is ( and that’s important on concepts ).

What goes for your question, I really did not understand it. What exactly you are proposing to do?

I haven’t tried this myself yet but according to the manual you can always replace your high poly mesh with a low poly mesh then animate that and when you replace the mesh back the animation should render with the high poly mesh.
Remember the object data is separated from the mesh data. You can see this in the Outliner under each object there is a mesh object. When you link objects they have different object datablocks but the same mesh object. Renaming the meshobject of one of the linked objects also renames the other objects.
Don’t forget to make the highpoly mesh a fake object or it will be deleted once you close your blend file.
For a brief overview look at http://wiki.blender.org/index.php/Manual/The_Outliner#ObData_Datablocks
and search the web

Carefull not to rush through this. The head and hands look perfect, not to sharp and not to smooth, but the waist/tail/second cockpit and some other bits and pieces look like they have some smoothing errors. And it’s to good a model to end up with those kind of flaws.

Odjin: Though Musk already explained this, what I want to have is a “fake” object that substitutes for a much higher poly object in the work-flow window. So I render the high poly object, while working with + animating the low-poly one.

Musk: Thank you for your careful explanation, but I’m still a tad in the dark.:eyebrowlift2: You’re suggesting that I make a high poly mesh and link it to the same object as a low poly one. But how do I then tell blender which one to render and to hide?
Oh, und sprechen sie Deutsch? Ich hab eben gemerkt dass sie von Deutschland sind.

Freaky Dude: You are right, there are some subsurf issues on the torso. There’s one on the opaqu section that I can’t seem to get rid of. :mad:I’ll go back and see if I can fix that and some others. I didn’t notice any on the tail though… I’ll double check to make sure though!

You should make it sleek like stainless steal and make it look real cool. You definetly got the toy look down it looks right on.

You might be able to get rid of these to an extent by adding an extra edgeloop and ctrl e sliding this loop closely to the “error zone” It’s a hack, but it worked in some cases for me.
Errors seem to appear here:
tip of the barrel, the cube shaped boxes (black and grey) with a hole in em, and there’s one at the back of the cockpit as well.

Odjin: Though Musk already explained this, what I want to have is a “fake” object that substitutes for a much higher poly object in the work-flow window. So I render the high poly object, while working with + animating the low-poly one.

About what you want to do. This sounds like what I am doing all the time. You want to work with a low poly version to animate but work on a high polygon version for details. There are two solutions that I personally use depending on the type of model I work on.

I hope this gives some pointers. Make extensive use of layers as they are your friends. Also note that more than one object can use the same armature for animation and only visible objects consume CPU time for updating.

Thanks Odjin! Your idea with the layers is exactly what I needed!:yes: I’ll use it as soon as I get around to re-making the blox.

Today though, I made the lower leg: 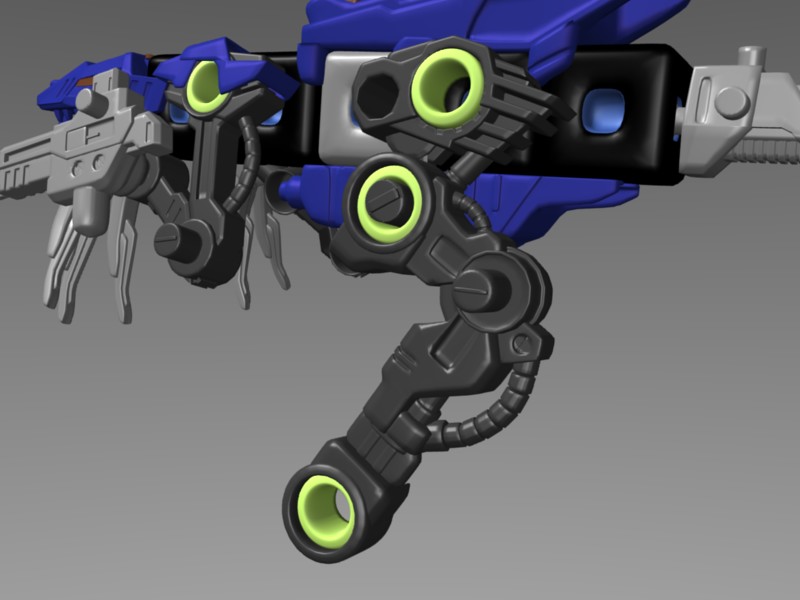 Here’s a view of the updated model: 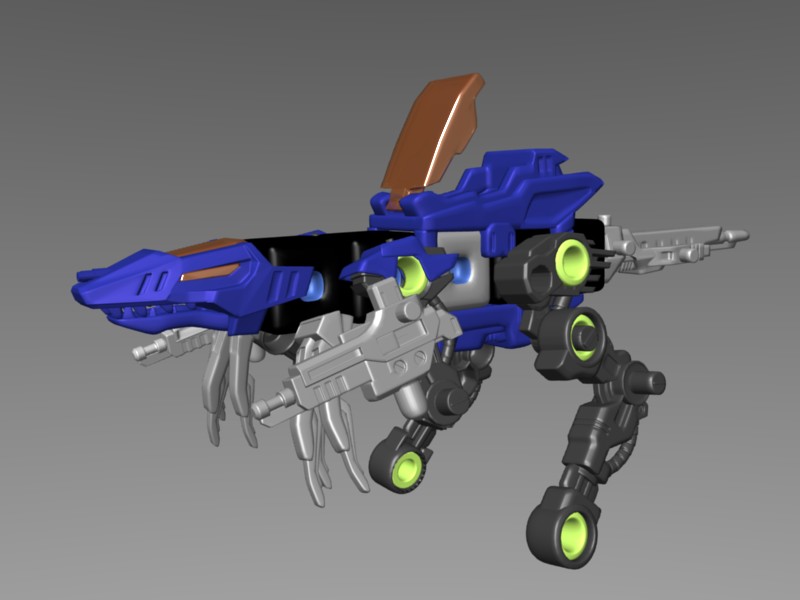 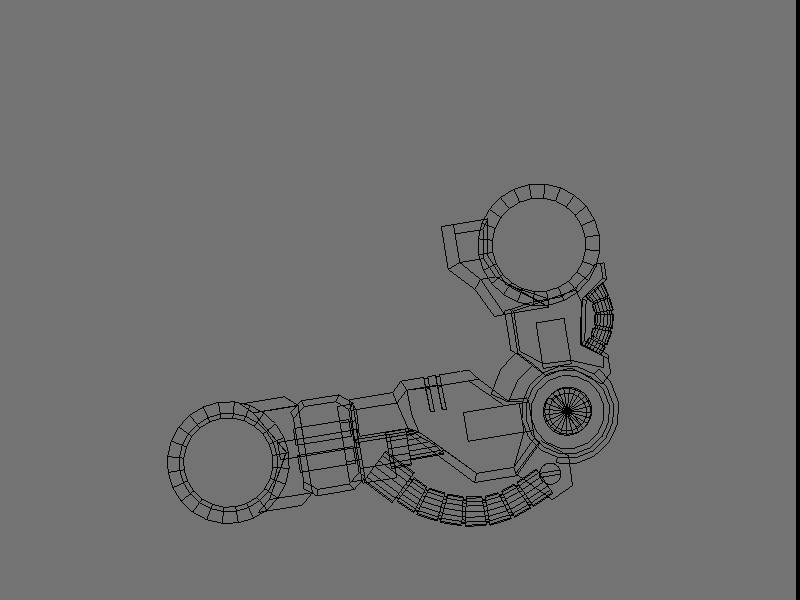 I made sure to fix the subsurf faults Freaky Dude mentioned. (Thanks Freaky Dude!:)) Since I’ll re-make the blox later, I didn’t bother fixing them.

Ja ich bin Deutsch und wohne in Deutschland - München.
Where are you at in the US?
What Odjin said about sound like a good way of doing it. What I suggested is basically a variant of the second way. You have the high poly version and the low poly version. What you need to do is enter the name of the high poly mesh in the mesh data block and work on that when you are done with the modelling and rigging part switch that object out by entering the name of the low poly mesh into the mesh data block. The other mesh will not go away but stay in memory until you close blender or you press the f button next to the mesh data block which will make it a fake block meaning it will stay even if not used when you close blender. You can now manipulate the object with the low poly object and play with it render it. Once you are done with animation setup and everything you switch back in the highpoly mesh and render. As said before I haven’t tested this yet but according to theory it should work. the problem I see though is with deformation that will only showup on the high poly mesh and are not welcome.
Model coming a long very nicely. What is your preffered way of modeling box or poly by poly or are you using nurbs or beziers or some other funky stuff?

I just go poly. Sometimes I will incorporate some box-modding, but that is quite rare. There are probably quicker ways to do this, (nurbs or beizers) but I’m not experienced with them and it would look bad.

I think I now understand what you’re trying to tell me about the meshes and objects. I’ll try it, see if it works better than layering like Odjin suggested. In fact, I’ll try both ways and decide which one works best.

After taking a short break from this project, I decided to get to work again. I’ve finished the feet: 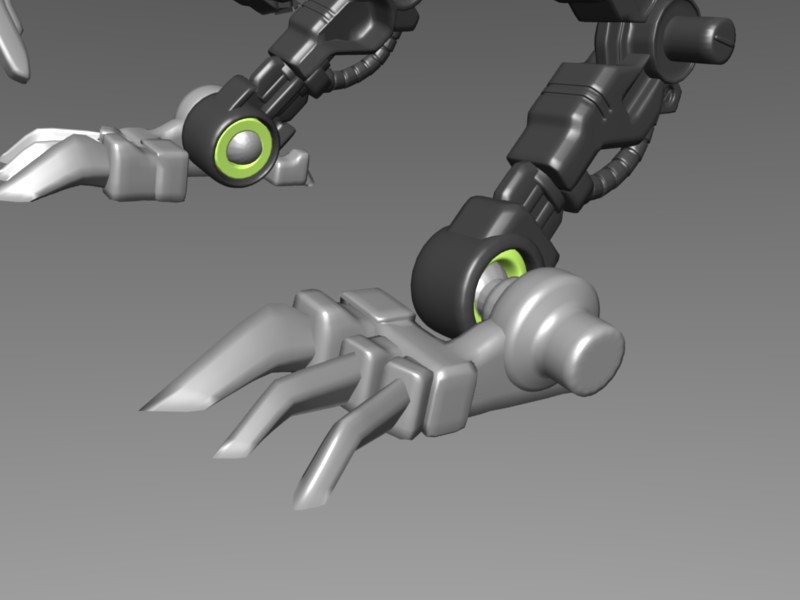 This is what the model looks like so far: 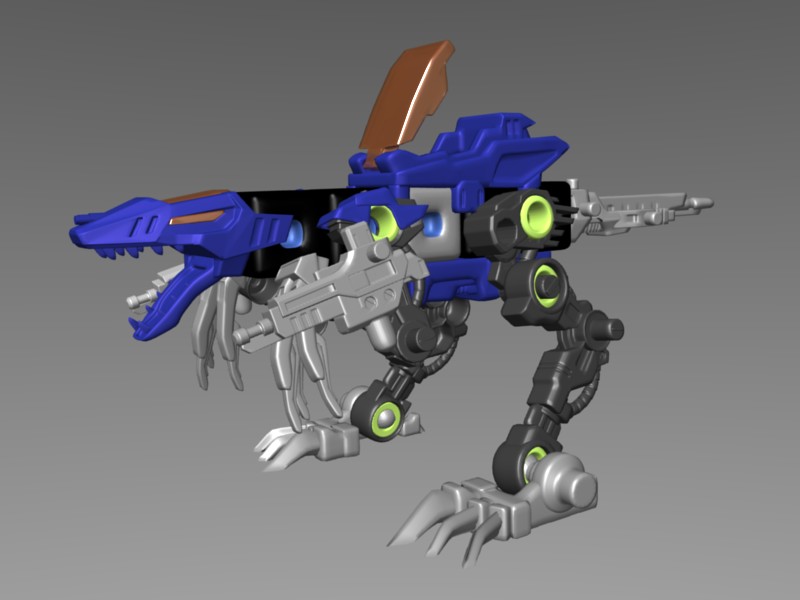 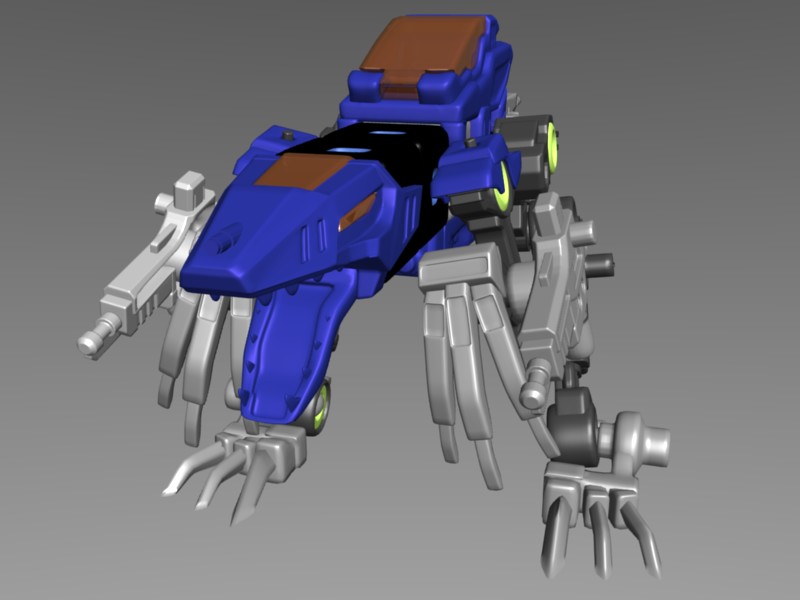 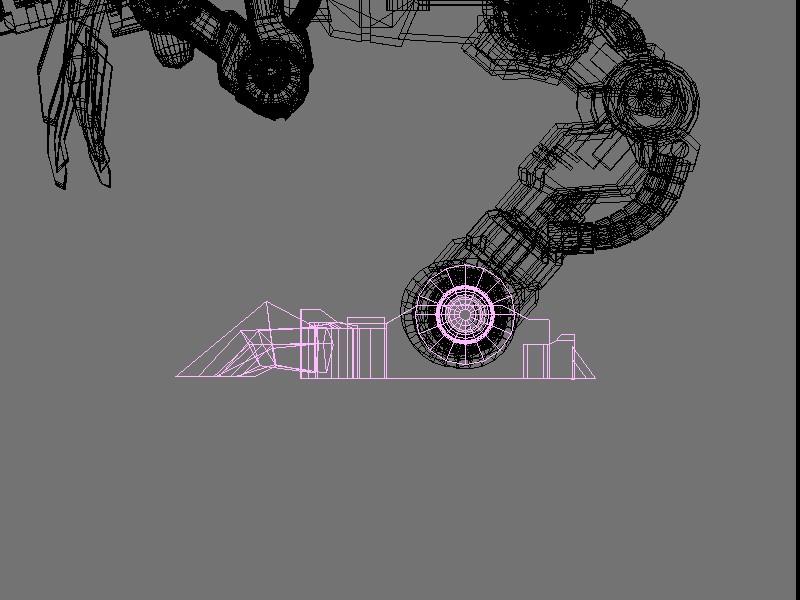