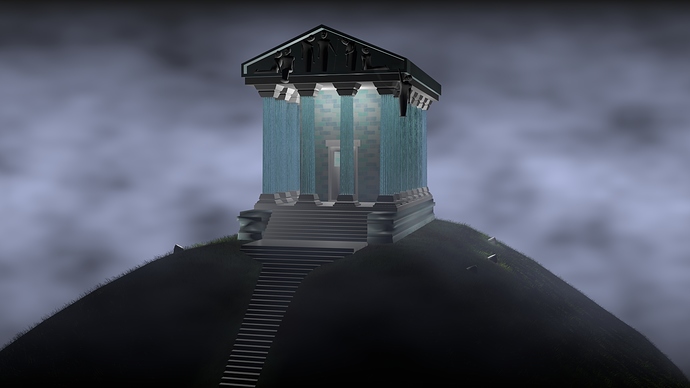 This is a modern take on a roman temple (including glass columns). Any suggestions to improve it?

[ATTACH=CONFIG]212220[/ATTACH]
This is a modern take on a roman temple (including glass columns). Any suggestions to improve it?

Well first and foremost…where is exactly your temple? in the real world? underworld?, another universe?, the sky?, also you could use a more dramatic lighting, give it more contrast and focus, simply for example by putting a light inside the temple with a slight red tone, it would be cool to see taller grass, lighting coming from the moon to add a blueish tone to the lower part of the scene while maintaining the red light, that’s IMHO. Thanks for reading

A camera angle looking up at an angle of the temple may give it a more dramatic look.

I second what valcar3d said about the light inside.

Hey Evivivi,
First of all, It would have more clear if you stated what exactly what you wanted to make this as. If it was more of an attempt to make a modern Roman temple, it would have been much better if you focused more on its modelling rather than texturing or applying materials or finally compositing it in a background.
If you wanted to make it in a world setting, I would advise you to begin with a loose concept art of exactly what kind of look you want to achieve and then proceed from there, like a matte painting of course. First compose your shot,decide what exactly you want us to see in it, the intricacies of the temple, or the world setting the temple is in, or a whole shot including both. By looking at your render, I would suggest you to compose it better, temple is too centered as of now. Then include some other things that would help sell the world setting better for a better cohesive look. Work on lighting more,especially the environment, and also on the color palette to include some more colors, that would complement the interior light colors of the temple. a bit warmer tone to the sky and surrounding would really make the scene better. Include some far background elements like distant mountains to create a sense of scale. A few foreground silhouetted trees would be really good.

Thanks guys!
The temple is located on a high mountain in a fantasy world.
I’ve yet to master compositing, I might give it a shot for my next project.
Here’s the final version for now: 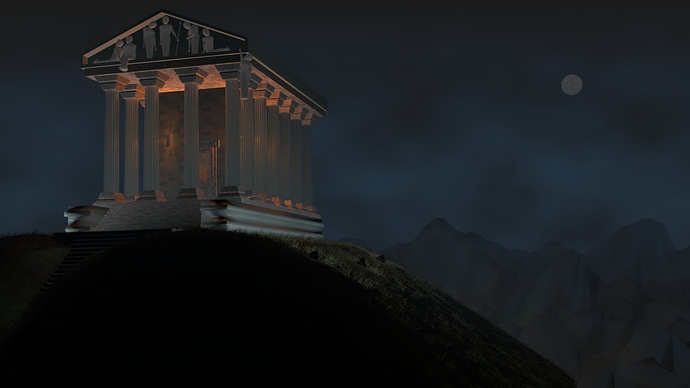 Good enough. Since it’s dark and the only source of light could be from the bottom, this will do. Would like to perhaps see some definition on the roof-edge on the long side of the building, because it’s really fading away into the sky, and as a matter of principle I don’t like to see opaque shadows e.g. the front of the hillside. I think it definitely looks best for the light to be coming up from the bottom; in the first images, it looked for all the world like there were some fluorescent tubes or mercury-vapor lamps up in the attic.

I think the moon is not bright enough relative the surrounding sky. The mountains seem to bright relative to the sky. Also the really dark shadow on the front of the hill seems out of place. Perhaps it should be softer.