A new update for Nach.

Things that have been changed/added:
-AI that most enemies will use has been created.
-Two enemy versions have been created with animations and logic fully working.
-Started testing what works best in a proper level environment.

So… what is Nach?
Nach is planned to be a rather simple 3D platformer.
If you’ve played games like the early Crash Bandicoot titles you know what I’m talking about.
The one major difference between this and old 3D platformers is that this game will have a simple enemy ai (Crash Bandicoot, again for example, simply had enemies that walked a certain path) and action combat mechanics (key combos).

As Nach, an insectiod character from the tribal Striiak race, you’ll be forced to travel the various environments of Stoko in order to save your tribe’s princess after your village got raided by Skull Warriors under the command of Warral (this is like… the most original plot ever!!).
You’ll be travelling environments like the Jungle, Kuru Fire Mountain, the Snow Pass, Aiko Desert and finally, the evil lab (this has never been done in any game before!!).
…
… Yeah, I know. This is by far one of the least original ideas one can come up with, but its a formula that I find almost always fun if I have a bit of casual time to kill and, because of its simplicity (so far), I thought it was a good way to start my first actual game project.

The quoted test map link is old and hasn’t been updated with the changes I’ve made so far. I need to find a way to easily export the pre-alpha map with its linked libraries without it being an exercise in tedium.

Here you can download the test map shown in the video: TestMap2
Since everything is linked together instead of appended I’m not sure if the stuff inside the above link will actually work. Tell if it does/doesn’t.
A warning: It will NOT work with a keyboard. You MUST use a controller. Any controller will do (I’m using a Dual Shock 4 with DS4Windows).
Mapping:
L Stick = Movement
R Stick = Camera rotation
Button 1 = Jump
Button 3 = Fast attack
Button 4 = Strong attack
Button 2 = Dodge roll

Things I may need help with:
-Opinions: What would be a good size for the Health Charms?
-When in the Blender Player there is a weird bug where parts of the HUD turn pitch black on changing scenes.
-There’s also a strange sound bug where the death sound of the Skull Warriors causes the music to either stop entirely or restart. Skull warriors dying aren’t sending any messages and the music empty isn’t receiving any messages either.
-There is quite some stuttering when coming near enemies. Gotta figure out what’s causing that…

This is really cool, keep up with it and good luck!

New things have been added and worked on!
Click

to see the video or just look at the first post.
Thanks to Cotaks I now have a save and load systems. I also now have a checkpoint system that works independently from the saving and loading. I did this by copying Cotaks’ into another script file and change what property its looking for. I’ve then given that property to Nach.
This means a level can be loaded from a save file with Nach starting at the beginning of the level instead of the last save point. I can also have Nach return to the last checkpoint without loading all of the level. This also means I can have Nach take damage every time he gets loaded to the last checkpoint, making falling off a ledge more dangerous.
This also means I can reload the entire scene if Nach dies (loses all health) with Nach starting from the beginning of the level, but keeping the collectible count intact.

I need help with some opinions about the size of the Health Charms.
As demonstrated in the video, collecting 100 will give you 1 extra life. These charms will cover the level in various places, some really easy to get, others really hard, some well hidden (which is something I’ll have to figure out to do. Hiding something in a linear platformer level might be tricky).
They already “glow” and have their emission value to the max, so they’d be fairly easy to spot. But what size should they be?

AaaaAAAAAaaAAAaaAAAaAARRRRRRGGGHHHHH!!!
Spent, like, 2 and a half hours painting a turban and scarf on one of my Skull Warriors. It looked so damn good.
I decided then to weight paint the scarf. Everything went so well. I was going to save the texture I painted before closing Blender only to find out ITS GONE!
[email protected]#€%@@+&¤###!!!
I was hoping I could show off the things I worked on today, but now I just feel bummed out =_= 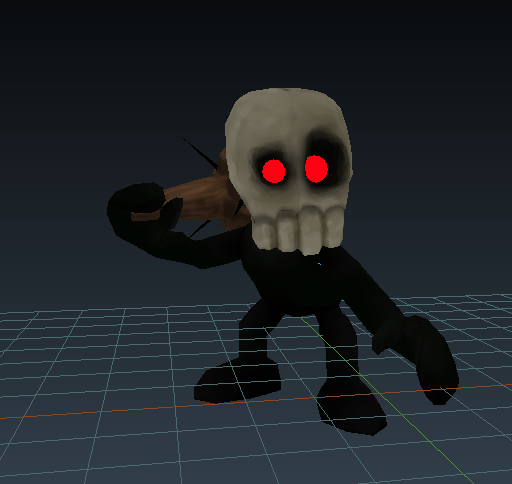 There’s going to be at least one more version of the melee attacker, which is a snowy maintain top version.
I’m also thinking of a volcano version, but I’m not sure what to do for that…
Would replacing the standard Skull Warrior’s club with THIS be enough?

World map concept. The idea is that the world map will work as a level selection menu. 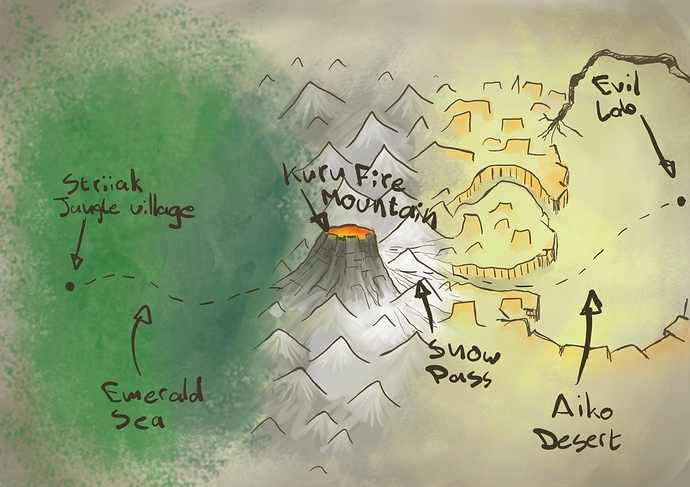