Naming a Game or a Character?

I’m having a bit of trouble coming up with good names for my games as well as the characters within them. Does anyone have a good method of coming up with original names that haven’t been used before?
Thanks

Use google translate. Get a word, change to other language… and you got a name.

Never used before? That is surely hard to say. How would you know its a name if it isn’t used as name before?

Why you do not use a name you like?

Edit: without more details about your game and the character you are looking for a name, I do not think anyone can help.

Me and a friend would go crazy, typing and sending potential title names back and forth on Skype chat. (with the game itself in mind)
Sure, they may not have been great… but we had a lot of names to pick from!

For game names, I just mull over the themes and setting for the game, and pick a name from words or concepts related to that. For characters, I’ll just run through all the names I can think of, and pick one that seems like it suits the character’s personality. If I’m really stuck for a character name, I’ll look up various names in different languages along with their meanings; or just start taking, breaking and recombining different names until I come up with something I like.

Game name example: The title of the gothic-fantasy action-adventure game I’m starting to develop. The game itself is primarily inspired by aspects of both Doom 3 and Thief, with gameplay that centers around vicious melee combat with demons. So, my thought process was: Where do demons come from? Demons come from hell. What representations of hell do I know of? How about Dante’s version of hell? Dante’s version of hell is divided into nine circles. What are the different circles called? The seventh one is called ‘violence’. The game has a lot of violence in it, so why not call it ‘Seventh Circle’? And Seventh Circle is the name that stuck.

Character name example: The player-character of Seventh Circle. I knew I wanted a strong female protagonist, and I wanted her to have supernatural powers. How do I give her supernatural powers, preferably without resorting to generic unfounded magic? How about making her cambion: half human, half demon? That works. Now, what are some good, strong female names? How about names derived from mythic or fabled animals; maybe predators? Well, there’s Leon- that’s a male name derived from the Greek word for lion. Lions are large predators, and they appear in a lot of different myths, legends and fables. So… A feminine form of Leon? Uh… Leondra? Yep, Leondra it is.

I don’t know if that helps at all, but that’s how I come up with names for projects and characters.

I made a random rp name generator in Java sometime ago, I also made one that would come up with the name a game along with a short lore.
I could easily do the same with the BGE (it gives me an excuse to learn Blender too), so I shall do so when I get some free time.

In the meantime, all the above are good suggestions, as using generic names that simply fit. Names can changes, games cannot.

Weaving your character, location and event names, game title etc. into one interconnected world helps with immersion and is what good writing is all about.

EDIT: There might be better places to discuss writing (for games) than this forum so I’m leaving it at that.

Agree with Kheetor. Everything in the game, names, characters, worlds/maps, everything…must be connected and have a reason for being there. Sometimes good names are just plain and bland. Names don’t have to be extravagant because the character that owns the name usually starts out like a normal person. Although I think you should consult a writing forum/group, this place is as good as any

No one here can help you with exact names without knowing more about your game. Ex: theme, time, place, setting etc

In my case my game remained untitled for about 2 years because it was still formless. I hadn’t finalized the monsters or bosses, there wasn’t any story or background. For those 2 years I was just working on art assets and code. Now the game is starting to come together a bit more I finally have some idea of what it’s about and that game me the inspiration for the name.

Work on the game a little first, once it starts to become more concrete in your head, names will start to accumulate.

Your name should suit your Genre though.

If you’re making a FPS you want a single word/ single syllable name like quake or doom or dust or rust or blood or bones or whatever.

If you’re making a scrolling shooter or sci-fi game you need a nonsense word like Gargylon or Falaxybol or Moorlognyon, or Togyflis or something like that. Even better if it could be Japanese sounding or Greek or Latin or something.

For RPGs I find b-movie tag lines are great, like The Shadows of Glomboldore, or The lost and the Damned or It came from the Dark!

While the simple naming convention outlined above is alarmingly accurate if you look at the market, I think they are still examples of names that link poorly to your game design. Your genre doesn’t dictate the rules nor does the established commerce but your theme might give you some starting points.

As with all creative tasks always think deep and outside the box. You will want a name that when typed in google will lead the players to your project and not the 200 other game projects, 400 bands, 70 movies and 50 companies that exists by the identical name. That’s what names are for: distinction.

But it might well be too early for THE name and indeed you can go on with project name until you have a clearer image of how your game is going to turn out in the end.

I recommend sitting down and seriously brainstorming. I was watching the Broken Age documentary series recently and there’s an episode where Tim Schafer is trying to come up with a name for the game, and he shows old notebooks from when he was designing Grim Fandango; in it are pages and pages of names, no matter how bad it was he wrote it down. Some of them weren’t good names but they triggered trains of thought that led to better names, some of them were forgotten about later, and eventually he came on a good name. I really recommend doing the same- give yourself an hour or two where you do nothing but write down names. Think about what your game is and write down anything that comes to mind, think about the things you just wrote and write down anything new that comes up. It takes practice to learn how to brainstorm effectively but it’s a very useful process for this sort of thing. Basically any name you come up with quickly will be a “surface thought” and either too obvious, too overused, or too formulaic. It takes a little work to go deeper and find something more unique and fitting.

seriously, there are resources all over the web 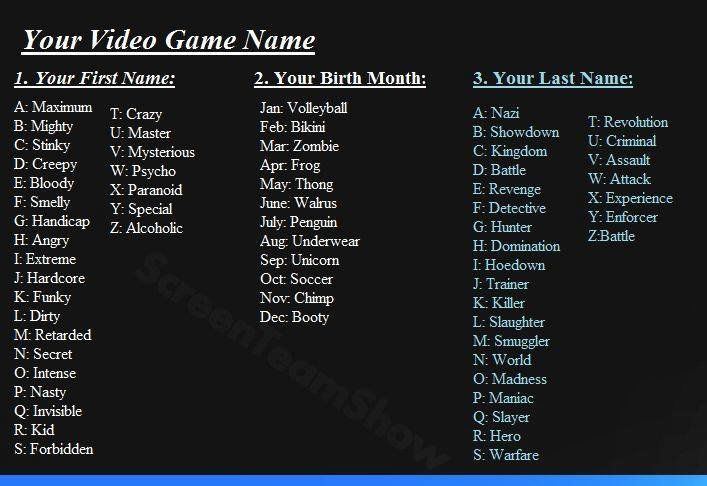 Huh, not a bad name!

lol @ Hardcore Walrus smuggler is me …