My second try on a Nazgûl or ringwraith from LOTR. Wanted 2 do one almost exactly 3 years ago, but lost the file when the project was still heavily wip at the time. However, the idea keept always being present somewhere in the remote depth of my mind & now finally managed 2 break out, again:cool:. All I have so far, is the bare model of the horse, on which the Nazgûl rides (& no, I’m not gonna do a fell-beast in addition, never really liked those). Anyway, here’s a pic:

I also rendered a turnaround-animation of it, which can B downloaded as .gif here:http://www.filefactory.com/file/ah084d9/n/0001_gif
(caution, the filesize is >9MB)
C&C always welcome.

I can see you have put some work into this.

The musculature shaping looks a little strange round the legs, too compact, more like a dogs muscle groups than a horses. This may be because there is no shaping on the torso/back yet.

The front legs look too short and the neck looks too long but that might be because the legs are short.

I like what you’ve done so far. WIP’s are always difficult to crit as you don’t know how far the artist has gone with the model or what they intend to do next.

Anyway… brilliant start. Look forward to watching the progress of this one, haven’t read LOTR since I was a kid but I remember I loved it, especially the Nazgûl.

I can see you have put some work into this.

Well, not too much… a couple of days, half a week, I assume.

The musculature shaping looks a little strange round the legs, too compact, more like a dogs muscle groups than a horses. This may be because there is no shaping on the torso/back yet.
Ain’t really sure, weather I get what U meant 'bout the muscles… should ’ smooth 'em a bit?
Apart from that, you’re perfectly right, I didn’t make much of an effort regarding the whole torso-area. In fact, I modeled all according to some blueprint(-drawing) I found on the internet & then only had a closer look (judging from reference-images) at the head, the legs, the chest and the throat-area & that was pretty much it.
So now I tried 2 couver the body-parts still lacking, especially the shoulder-area (right behind the neck), where that sort of “bump” was missing, the spinal area and the pelvis-area, which both had to be raised a bit.

The front legs look too short and the neck looks too long but that might be because the legs are short.

I checked on the legs, but couldn’t find anything wrong 'bout their length. I replaced the already mentioned blueprint (whitch did quite a good job as general orientation) by 3 different photos of horses having a more or less matching POV. I’ll attach screenshots, so you guys can see yourselfs, that the silouette of my model matches the horses on those pictures quite well. Doesn’t leave the impression of the front legs being 2 short, at all. Only on the third image, both the front- and the hindlegs seem 2 short, but this seems to be rather due to the perspective; or perhaps it’s some rather skinny, tall race on that picture, like an Arab or something, kinda got that impression (not that I had any clue of horse breeds).
I also attached another (still) render, showing the current state ot the art;). Judging from that render, I guess I’ma need to raise the pelvis-area on the sides (it’s a too steep “slope” there, right?) and I need 2 flatten the back (between the pelvis & the shoulders) a bit.
After all, thx 4 your extensive comment, your crits & your kind words. I really appreciate that.
greetings, Kologe 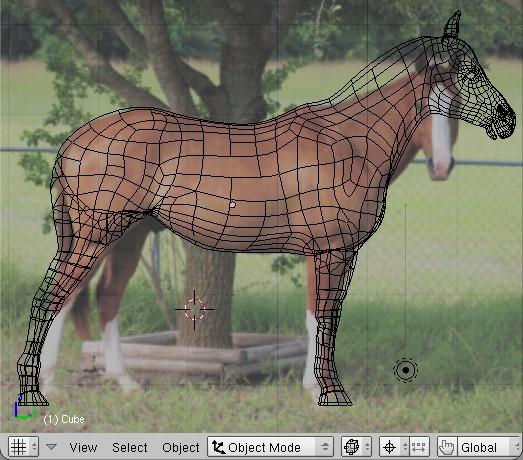 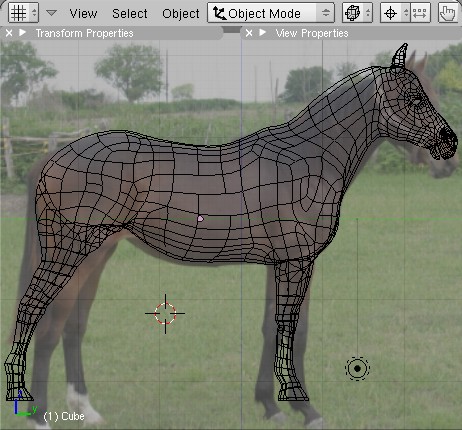 I think you should bring the back leg forward, to match the third picture.
In the top 2, its more stretched out to the back, not exactly a rest pose.

Also, as both legs are extended backwards the overall height of the horse will be lower than it ought to be, which may be why the front legs look a little too short. To be fair, it’s probably not by much but even relatively minor changes to overall proportion can have large effects on how the finished model is viewed, and what people see is, after all, what its all about.

Kologe,
I think I can see what you’ve done now. The rear leg you have referenced is extended back. In your model both legs are extended back, a horse wouldn’t stand with both legs extended back as cire792 pointed out.
Extending the leg will make the muscle groups a different shape to a ‘rest’ position. As a consequence your horse has two extended rear legs with muscle shaping to match, which is why it looks wrong. On the up-side, the muscle shaping is spot on for an extended leg, it’s just that you have modeled your horse with two backward extended rear legs.

I see. You’re both right & I’m perfectly aware ‘bout that issue (having both legs like one step backwards from restposition); but I had the choice between modeling it like it is now, having it like one step forward (which would look just as odd) or tryin’ to do it freely somewhere inbetween. Anyway, I guess I’ma leave that 4 the moment, until I have it all unwrapped & rigged & stuff & can without any regrets or restrictions get rid of the mirror-modifier. Until then, I’m gonna leave that aside & anyways, let’s see what the rig 'll do to it, first (B4 shifting verts 'round again).
Apart from that, I’ve more or less coicidentally come across some nice references today & used them to further tweak the overall shaping & stuff. So here’s one more screenshot & 1 more render. Is it just me, or is my lil horse a bit skinny now?
Well, maybe not even… but I guess I should make the whole neck-area a bit narrower (like scaling it on global X-axis), shouldn’t I?
greetings, Kologe 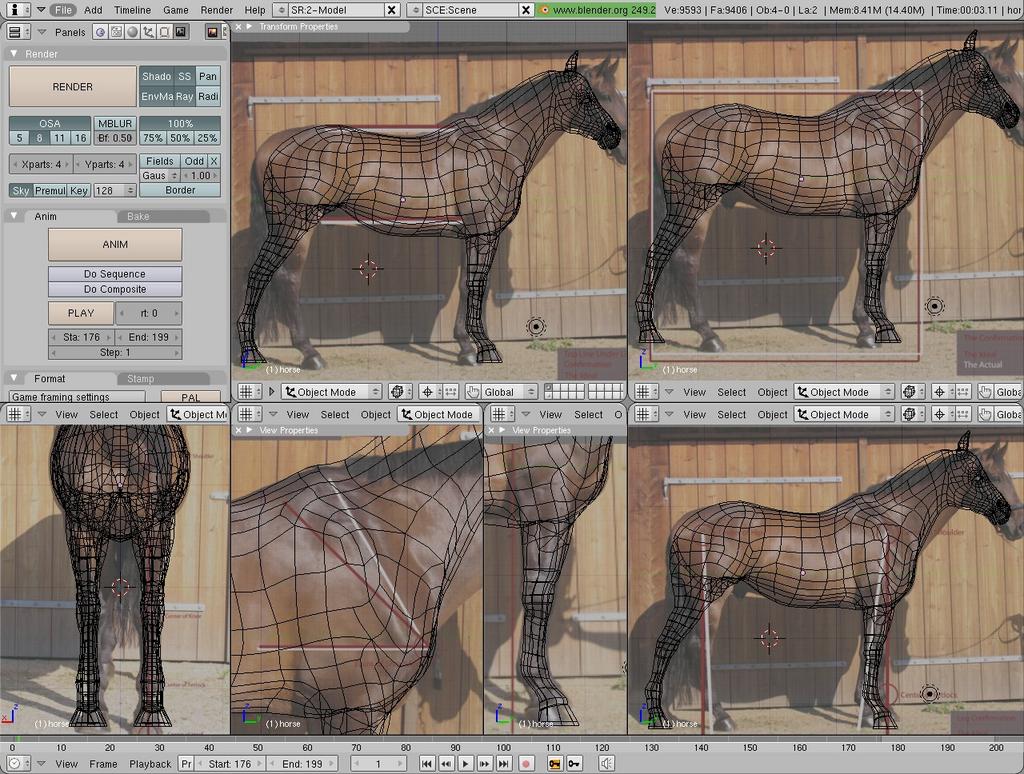 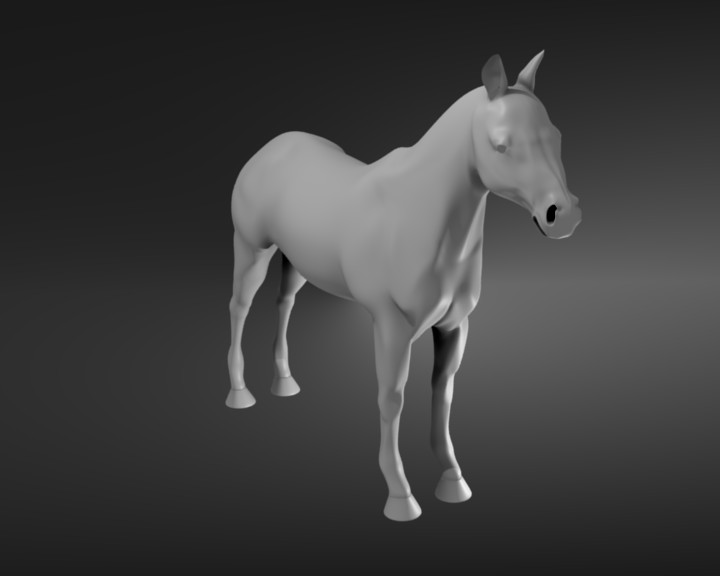 Some quick&dirty col-map attempt…that needs a whole lot of additional work, of course. But it shows the general direction I’m heading 4. So it ain’t gonna B a black horse as many of those in “The Fellowship Of The Ring” (even though not all of 'em).
greetings, kologe 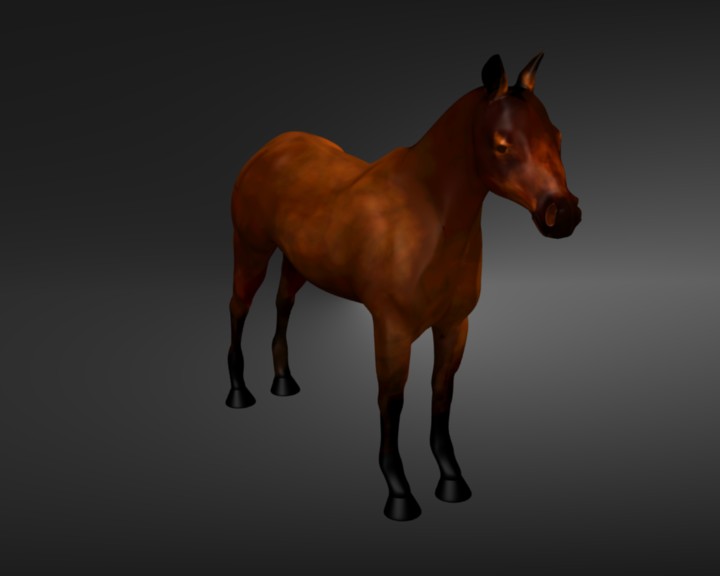 Make it gray, and how did you make that texture? For hand, or did you use a texture from another horse?

Make it gray, and how did you make that texture? For hand, or did you use a texture from another horse?

By hand (pure projection painting… yay, tripple-aliteration^^). Could hardly imagine how to properly map photos onto such stuff like a horse

.
‘bout the colour: In theory, it’d need 2 B black (there was somethin’ 'bout Sauron expliciteley stealing all black horses from Rohan), but imho a black horse makes things unnessesarily boring. No bad idea 2 make it gray instead, I kinda like that (at least if I imagine “gray” icluding mostly some silverish shades). After all, I’ma stick 2 my brown horse, but as I’m increasingly tending 2 include more than just one single Nazgûl into the scene (mayb even all 9 of 'em, who knows), there’d B the possibility/opportunity 2 make it one brown & one gray horse, & make the rest of ‘em black, what about that?
Apart from all that, I improved the texture meanwhile, makin’ it more homogeneous, less “stainy” & also less reddish.
And don’t worry 'bout the weird, waxy shading, it’s just temorary & its only purpose is to give the renders as closeley as (without 2 much of an effort) possible the same appearance the GLSL-viewport-shading produces (2 thus prevent unwanted results with the whole projection-painting-thing & simplify the workflow). Later I’ma add strands & stuff anyway & redo the whole shading during this process. It’s all 'bout that col-map, 4 the moment.
greetings, Kologe 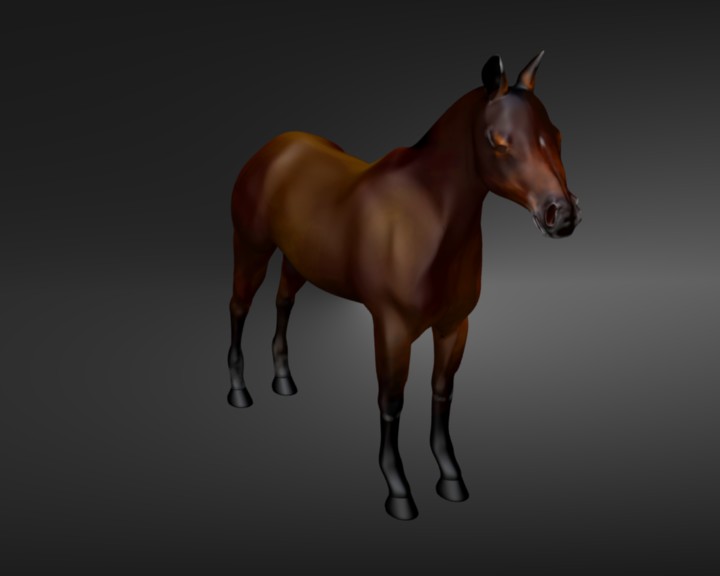 I’ve decided 2 leave aside the horse itself now, as I’m pretty much confident with the model (even though it still lacks eyes & dentrition) & roughly with the col-map, too.
So I’ve started with the accessorys, meanwhile. That is the armour on the horses forehead plus the whole bridle-stuff, 4 now. Saddle, stirrup, reins & (horse) shoes still need 2 B done (thx 2 leo.org, I’ve learnd a lot 'bout english riding-related terminology, now:confused::rolleyes:). Note that all those mats shown here are only rough’n-ready,so don’t worry 'bout their bad quality; I’ll change them early enough, but 4 now, it’s all 'bout the modelling-part.
Remains 2 say that the armour is 2 a ceartain degree done according 2 one of those used in TFoR, but it’s no exact replica, lateley. Oh, & that black thing I’ve shrinkwarped onto head & neck ot the horse (it’s supposed 2 B made out of leather) will get refined further. 4 now, I’ve just put it in place roughly, so that it’s present, at least. But as it ain’t supposed 2 look like some weired SM-gadget, it won’t only need a better material, but also some refinement on the modelling-part (primarily some wrinkles & parts looseley hanging down). It’d probably not B worth using a cloth-modifier on this one (even more with all that complex surrounding geometry), so I’ma have a try at sculpting the needed details, here. And even then it’d still need some thickness… I’ll see what to do best 'bout that; it’s a pitty, there ain’t no extrude-modifier or such in Blender (yet)…
Feel free 2 comment, criticise, etc. …
greetings, Kologe Ain’t much, but I’ve been modelling the armour on the Nazgûl’s legs now.

Hey fellas,
it’s been a while, since I’ve just moved like 500km apart & 4 this reason haven’t had any access 2 my PC (& no internet) 4 some time. But now as I do again, I’ve been contunueing work on this one. Not that I had made much of any major progress yet, but @ least I just got finished the rig of the Nazgûl’s leg-armour. Watch this lil’ quick’n’dirty test-.gif:

After just deciding to do the clothes of the Nazgûl by sculpting mainly (afterwards puttin’ a cloths-modifier on it, 4 further refinement & to make it adapt to the surface of the other models), I’ve now started to make the basemesh 4 sculpting. Here’s what I’ve got so far: 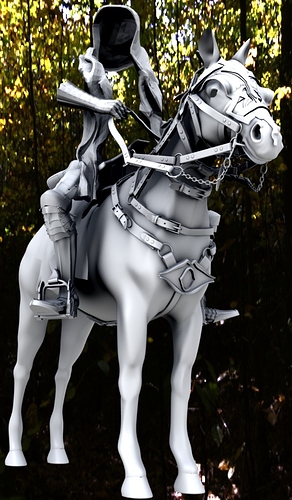 Looks amazing!:eek: I love the nazguls…so evil. Looks like it will be a pain to unwrap though

Looking really awesome!! I love the armour. Maybe it’s just a trick of the light but it looks like the strap for the shoe hold on the saddle goes behind his leg. Maybe you wanted it like that but I always assumed the leg went begind the strap…

Nice result. Seen this topic a bit late maybe but I would recommend to change the rig a bit. Since right now your foot has no roller bone and these are damn useful preventing on one side the twitching you’ve going on there and allow to fine tune the leg bending.

But on a second thought do you plan to leave the rider on the horse all the time or can he step down? Since on that case forward kinematics is most probably better than using IK.

@Odjin: Ain’t gonna animate it.
Apart from that, some progress, just 2 keep the thread alive. 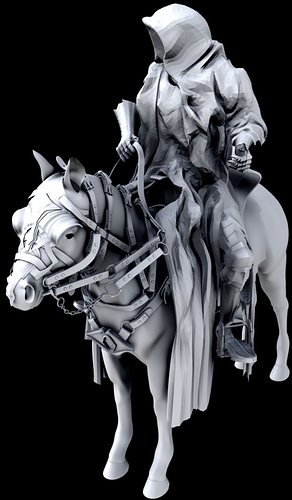 Awesome work so far.
One question though, is the strap for the stirrup going around his shin? Shouldn’t it be between the horse and his foot instead?

Looking even better! One question. Are you using a cloth simulation for the cloak? or did you model it all yourself?