(previous question go to 3rd post for new question about neck) Alright, so I’ve been making an armature for a model I made. I’ve gone through a lot of trial and error, but I can’t seem to make the constraints work so that the legs in the armature will move as they are naturally supposed to. I’ve followed cgcookie’s David Ward’s Dragon Tutorial and Rigging an Alien video to try to figure how to make the armature work, but I just can’t seem to get it right. I’ve attached the armature to see if anyone can tell me what’s wrong with it, as I’m sure I’m close to having it work so I’m not asking anyone to fix it for me… I just need to know what I’m missing.

After messing around a bit, I discovered parenting the wrist bone to the controller bone will move the leg as it should, but then the IK bone won’t rotate the toes/foot. Although, perhaps there is no need for that “IK bone” because of my constraints in the toes?

You have a cyclic dependency since the IK target is in fact a child of the IK chain itself.

i’d solve this by just unparenting the controller-bone. This makes the IK work, like you said.

To make the foot follow the rotation of the controller, just use a copy rotation constraint on IK.L (perhaps this name is also misleading, since it has nothing with IK to do), copying controller. But first you will need to align IK.L so that it has the same orientation as controller. Does this make sense?

Here’s an image for clarification 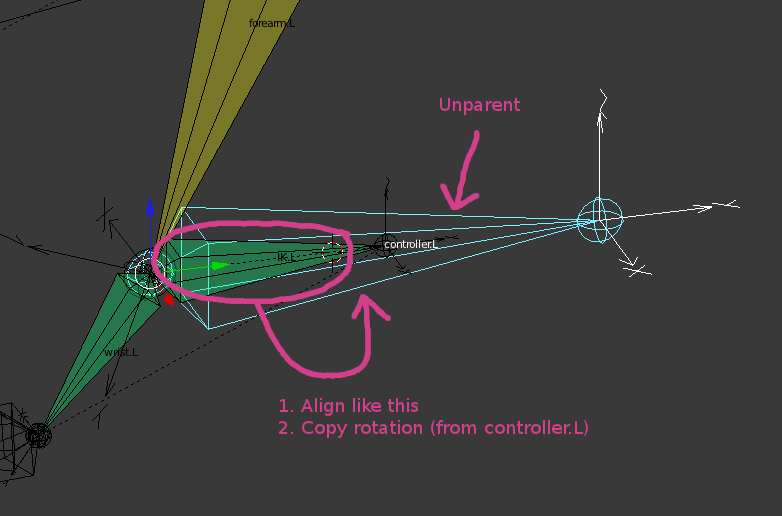 Thank you so much! Everything works beautifully now. Sorry for my erroneous naming, I was following David Ward’s tutorial for the alien rigging and forgot to correct them.

One question, I have been trying to get the neck bones of my armature to follow/bend with the head (called NeckBender due to previous trials), are there any tips you could give me to get that to work?

Or perhaps is there anyone else who can help me out?