I’m trying to make a ship for a story. A faction of humans travelled the galaxy and and eventually went beyond the rim into the void. Century’s later they came back, very different…

I want it to look organic mixed with metal. Those ridges are supposed to represent bone, the main body mesh will hopefully have an animated texture of some kind. The red globe at the front (that’s the front) will eventually mount a laser, it’s like a globe of gel and I’m thinking of slapping some nerve system in there too, probably animated like the Sardi Pax tutorial.

I’m heavily influenced by Babylon 5 and I wanted to get something like a shadow vessel down without ripping it off completely. It’s still early days yet and much to do. Any Ideas or suggestions are very welcome. 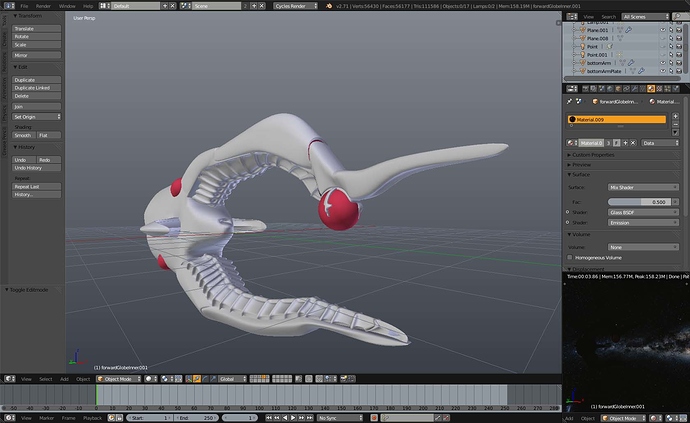 I get it. Looks good; I like the logline, albeit missing the hook. Your ‘under belly’ could be that of ‘pulsing’ as though alive. Perhaps vein like /arteries?

Yeah veins are what I’m working towards. What do you mean hook?