This pic below is the top surface of a 55-gallon drum. I’m connecting the geometry of the bungholes with the surface. The way I’ve connected them thus far is a bit questionable:

I set the faces of the surface to solid and, fortunately, they rendered with Blender’s internal renderer without any shading distortion. But then I tried rendering with Yafaray, and there was distortion. Two triangles extending from the bungholes to the center were darker than the rest of the surface. I figure this is because the way I patched up the geometry is messy, and I need advice on how it can be done better. Or if the geometry is fine, why is there shading distortion? I realize that I’m mixing tris and quads, but I don’t thing that’s the big issue. thx

Yeah I can see where one triangle is so thin you can’t even see it. You just have to extrude some edgeloops coming from the sides of the bungholes, that follow the curvature of the barrel. Once you do that, you should be able to extrude inward without getting any of those sliver thin tris. 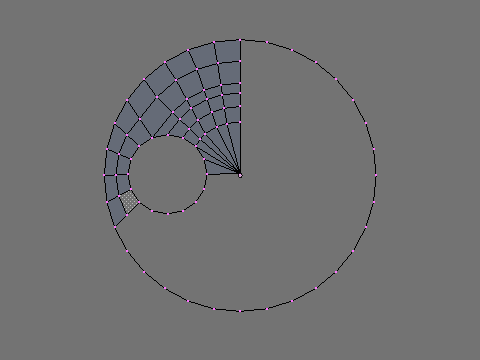 Actually don’t do either your way or Modron’s. This way would be much better as it’ll completely keep triangles out of your mesh. 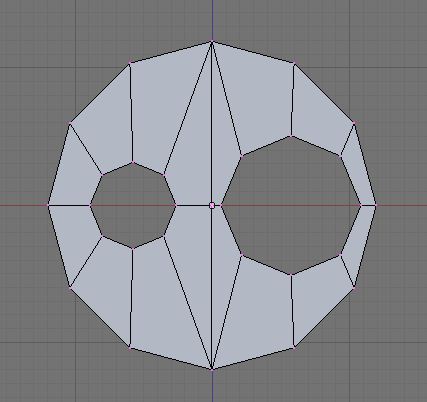 Modron’s model is quite good, I would only change two things about it.

bartric’s model might also work, but again, you should add a loop around the main details. This makes life easier in many cases.

Modron’s model is quite good, I would only change two things about it.

bartric’s model might also work, but again, you should add a loop around the main details. This makes life easier in many cases.

Already tried something with Modron’s model, didn’t work, instead I got this annoying blemish on renders where all the triangles met. The method I used was suggested by someone else and fixed everything for mine. Not saying Modron’s wouldn’t work, cause it may in some cases, I just find it better to completely get rid of triangles so you don’t end up with terrible blemishes that you have to fix after you’ve already subsurfed it and have 16x more faces to work with.

I meant something like this, which will work very nicely with subsurf 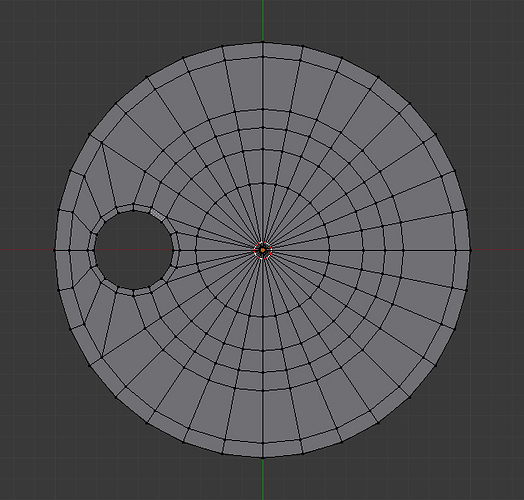 Well, I made your EXACT model, and cranked up the subsurf as high as my laptop will do without dying, and surprisingly, those tris didn’t do what they’ve done to me before. But I’ll still have to disagree and say my way is prefered. Mostly because I have yet to encounter a single artist on the forums that approves or even suggests the use of triangles, all I’ve ever heard from them is always use quads.

Oh, and here is why I shy’d away from using triangles all together: http://blenderartists.org/forum/showthread.php?t=198003&highlight=penny

But regardless, use triangles all you want, because it’s not like you don’t hear of so many people complaining on here because of something getting messed up then it being pointed out it was because of a triangle.

Simplest way to do it is to just create separate objects. And join them if you want. No point in fussing with mesh flow large to small! That is if you really want to see how you can do it.

As for triangle, know how it affects Subsurf or rendering. So long as you know what it does stay away from its undesirable effects. I did this here in this quickie model. Do you know were and why? 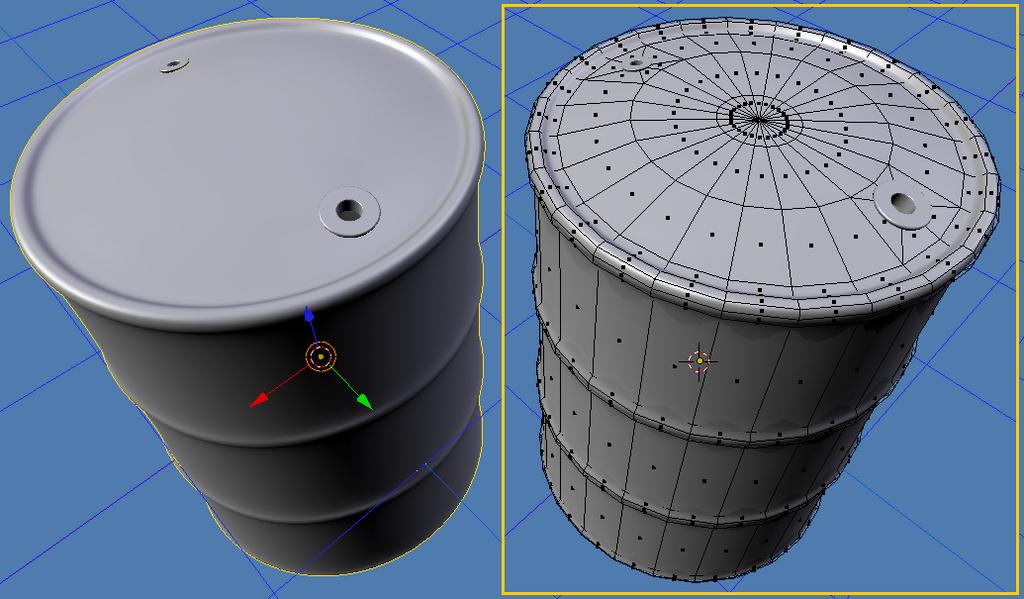 if you have an isolated plane surface, it doesn’t really matter if you use triangles or quads, and the topology can be as messy as you want. It won’t affect the subsurf. A messy topology will on the other hand make it hard to get controlled loop cuts should you need it. Subsurfacing is done by a certain type of averaging, and if all the vertices are in the same plane, the average in that direction will be 0, and thus you won’t get any deformation in that direction.

bartric: your example has an edge loop around each of the holes, but to get a good result when using subsurf, you need to add a second loop. In this case that would probably be easiest to do, by extruding and scaling down both holes. You also need a loop around the whole circle, or you will get pinching.

As for the example with the penny. That could have been solved by adding an edge loop to isolate the triangles. When I say that the triangles are isolated, I mean that they are not directly connected to any edges that are extruded out of the plane.

batric: using your method, I would end up with similarly thin tris (as these holes have 24 radial edges), wouldn’t I?

Morio: I will try this method. edit: being stupid

ridix: would work if I didn’t want to blend the bungholes in with the surface. They are actually depressed a little aorund the edges before going back up.

No, you shouldn’t end up with any triangles as long as you use the right vertex count on your holes. You can’t just slap a circle with any number of vertex’s in there, or yeah, you will get triangles, you have to have the right amount of vertex’s for everything to cancel out.

No problem, just add loop cut around the hole and pull the hole in.

Okay, this doesn’t make sense to me. I did the geometry in a similar way to how Morio suggested, though with a few differences. Here’s the geo:

…looks alot better than the original geometry. But it worsens the problem:

Btw, I already applied subsurfs to all this. I know, my fault. I’m pretty new to this. I’m going to have to find a solution to this regardless.

Personal I would stick with ridix’s Idea. Then you can model both the way you want them.

As a side note If anyone need to know how to joing and separate objects check out my reply in this thread post #4 http://blenderartists.org/forum/showthread.php?p=1714312&posted=1#post1714312

Nevermind this thread. I solved my problem, and it wasn’t geomtry at all. It was that some of the faces weren’t at exactly the same level as others. Thanks for all the replies though.

…I’m connecting the geometry of the bungholes with the surface…

Instead of spending a lot of time and effort connecting geometry which might result in a lot of unwanted tris, how about doing it as shown in the pic which is fast and easy and results in a nice clean mesh with no tris.

Select barrel’s top row of verts then:
-Extrude
-Scale=0
-Add desired # of loops (Ctrl+R)
-Select then delete verts to create 2 holes
-Select ring of verts around one hole
-To Sphere (Shift+Alt+S then “1”)
-Deselect
-Select other hole
–To Sphere (Shift+Alt+S then “1”)
-Subsurf Modifier
-Add Loops to tighten up as needed
-Select all the verts in the center which are on top of each other then Merge (Alt+M) if desired 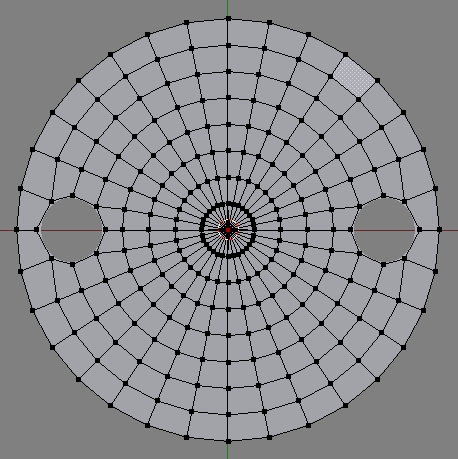 Personally I think you’re just working with too ‘crowded’ of a mesh… Try using simpler objects, subsurf will fix it all in the end. It’ll look just as good whether you use an 8 vert circle or a 32 vert.