Need advice: Creating an ocean scene with a thunder strom

I’m tight on budget, so I decided to make it myself, but I’m not very proficient with Blender. So I need your advice. I want to create a video clip for my original song with an ocean and a thunderstorm. It needs to look as realistic as possible. Please advise which assets best to use. I want to achieve such quality as this video: Am I correct to do the following:

In the beginning, the storm is far away. It is very chill. In the middle the storm is here and raining heavily. In the end the storm is gone and the waves are less intensive.

Here’s the song I’m making the video for (rough mix)(not mixed yet):

Thanks for your advice in advance! I plan to share the final scene source with the community.

Rather than using a fluid simulator for the waves, I think Blender’s Ocean Modifier would be more suitable for this type of effect (and much faster too!). 5+ minutes worth of fluid simulation would take quite a while to process. There are plenty of tutorials on YouTube for working with the ocean modifier.

For ripples, perhaps dynamic paint effect triggered by a particle system could work on the ocean surface. Ex: Tutorial: creating realistic ripples in water with dynamic painting in blender 2.8.

Thanks for the answer. The ocean modifier cannot realistically show the water splash onto the beach or against the stones or other obstacles on the beach. The plain surface looks good in the middle, but not on the edges.

“5+ minutes worth of fluid simulation would take quite a while to process.” - Do you mean it would take too much processing power to RENDER the scene or to CALCULATE the simulation before the render? What would you advise to do to make this process easier?

Is there a way to use Flip fluids container near the beach, but to use Ocean modifier for the rest of the ocean. This way, the Flip fluid addon would only bake a small part of the waves. I don’t only understand how to put both together.

Yeah, using the ocean modifier is definitely a better idea. Then for the foam, I would just try and find a texture online like this and mix it with the base colour using a noise texture that you can animate. You could also try and make the effect procedurally using another noise texture.

Apart from that, I would highly recommend rendering each of the elements on a separate layer, and then compositing them together either in blender or another video editing program like da Vinci resolve. This gives you so much more freedom with the final look, and also means that you don’t have to render out ~9000 frames of the entire scene every time you want to make a small change.

I’d also recommend looking into how to then make each of the different elements loops, as that could also cut down massively on the amount of rendering that needs to be done.

For the clouds, Instead of messing about with volumes, which slow everything down, and are hard to make look good, I would find an image of a cloudy sky like the one in the video, and then in photoshop cut out each of the major shapes into separate images. Then you can place them at different depths in the scene, and use a cut out of a lightning bolt with an emission shader to light them.

Sorry if that’s a bit vague, but I hope it helps!

Especially about rendering to separate layers. I’ve never done this but will have to learn. Didn’t even know about it.

Looping would be a problem I guess because the music is going from mellow to harsh. But looping small fragments within each of the stages would be great. But again, have to learn how to do it. Will look into it. Great advice.

I will experiment with both volumetric and image clouds. The effect depends on the lighting. Need to see which fits best.

If realistic fluid interaction is needed, the best way would be to combine both a limited fluid simulation effect and an ocean modifier effect. There are two methods I’ve seen artists do this:

“5+ minutes worth of fluid simulation would take quite a while to process.” - Do you mean it would take too much processing power to RENDER the scene or to CALCULATE the simulation before the render? What would you advise to do to make this process easier?

I meant not too much processing power for a system to handle, but rather a long length of processing. For 9000+ frames of simulation depending on size of the simulation, this could be around of 1-5m baking, 1-10m rendering, and 25 - 150MB of storage space per frame.

Simulation systems are also not very often used for long single shots of animation as the simulation can degrade in stability over time. Usually simulators are used for short clips of a few seconds for an effect.

For a more manageable simulation, it would probably be best to render out multiple smaller sequences and find a way to loop them in a video effect.

I bought “Physical Atmosphere and Starlight addon” from the blender market for the stars, horizon, and atmosphere. Works great.

But my volumetric clouds look black at night. I have posted about it here in another post:

Hi, guys, Blender asset addon includes a free Volumetric procedural cloud. It looks very good in the daytime. But it looks black at night. I use Blender addon “Physical Atmosphere and Starlight”. During the day, the sun is White. During the evening the sun is Yellow. During the night, the sun is Black. The color of the sun is controlled by rotating the sun from day to night cycles. [image] The procedural volumetric clouds receive this base color from the sun. I guess there are two solutions…

Not sure how to solve this best. 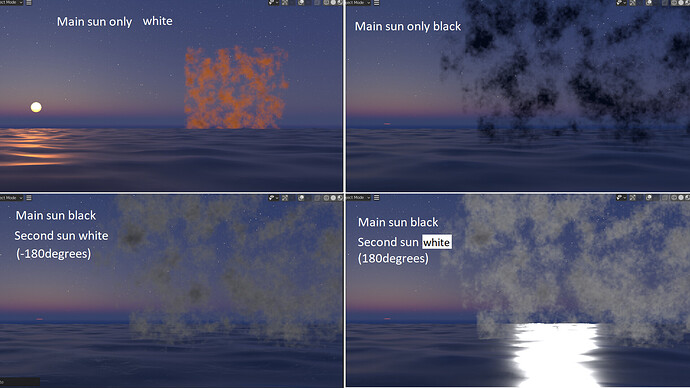