Created several designs for a board game.
these renders will be used in cards and other parts of the game.
the setting of the creation is something arround 2076 in mars.

this includes grenades, suits and weapons. for now I want some feed back on a sub machinegun I created for this proyect.

will soon also include some other objects as I finish them. 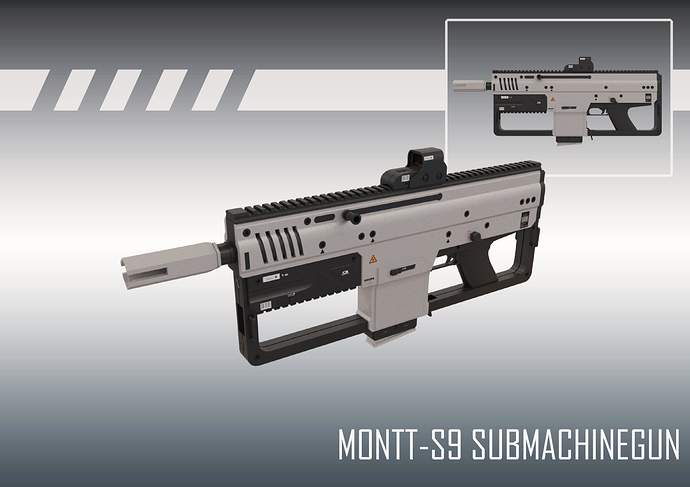 Are you looking for feedback on the model or on the overall design?

Because that looks like the most impractical non-functional rifle ever.

PS to expand on this so its not just a jab:
The rail that goes around the rifle bottom is entirely impractical. Someone wanting to quickly bring the weapon to bear from a relaxed position would constantly get stuck on the railing.
Besides, the back part of the railing would interfere with a proper grip of the weapon as your wrist would get stuck on the back rail.
This railing is for what exactly? Parrying swords? Sure looks like a cross-guard thats supposed to protect your hands, but from what?

Additionally, is this a two handed weapon? SMG or assault rifle? Because the center of mass is at the magazine, yet it has a pistol grip, but no stock (not even a short one). If its two handed (MP5), its too short and has no stock, if its one-handed (Uzi), the center of mass and pivot around the pistol-grip is wrong.

You do have a reflex sight on top and a rail, which means someone would want to aim that thing bringing it to their face, which means the first shot they take will smash their face in without a stock.

well I feel I need to make some statement now realted to the “science” of the SMG, the gun is practically recoiless, using an electromagnetic pulse to drive the proyectile out of the gun, therefore the no need of a stock.

this is mainly because this gun was made to be used by people living in 1/3 gravity enviroment, making pretty much any regular weapon useless because they wouldnt be able to contain the recoil.

althou in the model I agree I would add a stock just to make it easier to aim.

also the outer frame wouldn’t get in your way to wield it, mainly because you never hold a gun exactly from behind the grip but from the side of it.

also I now consider the model I show lacks some more attachments, like the front grip,
but must say it is ment to be used as an MP7

It can’t be recoil-less unless it’s shooting something backwards.
Some “traditional” guns achieve reduced recoil by driving some gas from the explosion through a backwards-pointing channel.

I don’t see how you could do this with a coilgun, so, since “every action produce a reaction”, the gun would receive a backwards force as big as the forward one applied to the bullet.

Don’t try to use science to make it recoilless, just assume it has some recoil, with strength established by your artistic needs (usually big recoil = powerful weapon), and avoid calling in actual science when possible

actually it can be recoilless, because as I said its a magnetic pulse weapon, the proyectile in the canon floats as the pulse drives it out, in this case there is almost 0 backwards force from the proyectile propulsion as the canon itself absorbs the actual recoil.
now.

what about the design and quality of it, im not building a prototype here people =)

The design looks cool, i don’t have anything to say about it

It looks quite similar in style to the objects masterxeon uses as sample images for HardOps.

Quality seems good to me.
Maybe it lacks some subdivision on some rounded angles, which look polygonal in the full-res image.

Adam’s points on being practical make much sense.
The railing prevents the hand from holding the gun in a natural position. While you don’t hold the gun exactly from behind, the arm still has thickness, and part of the rail seems to occupy an area where it would meet it.

Still, not many people would think about these when they’re just playing a board game, so it may be unimportant in the end.
It looks cool after all

PS: My pet peeve on the recoil (sorry): the recoil force is more controlled in a railgun, but it still has to impart the same momentum. Compared to a traditional gun, it’s more uniform and it has a lower peak, but it is exerted for a longer time and it is still relevant.

well after both of you told me I will make some modifications and hope you like them.

It looks completely impractical. I’m not well versed with guns but this doesn’t look right to me. How am I suppose to hold this properly? Where would my hand(s) go?

Also, there is always a recoil. This is established science, the law of the universe. Though, maybe it propel something that doesn’t have mass. Maybe this gun shoots energy (say light or electricity) instead? Like those lasers in sci-fi movies. No mass, no recoil.

As for aesthetics, it has a look of an office appliances. I don’t know why, but it just so reminds me of those white photocopiers, electric typewriters and printers.

Actually, even a laser would produce recoil even though it would barely be noticeable. Increasing the temperature of the photons being produced will also increase the recoil but it will still be barely noticeable. If anyone is interested, it’s called Newtons third law of motion.

As for the OP’s gun, it can be held like a normal gun but the lack of a stock will decrease its firing stability. If it does have recoil then it will also take a toll on the shooters hands. As for looks, it looks a bit boxy but then again a lot of modern collapsible guns look like that.

Well, virtually no recoil then. Why I present that conjecture is that it would eliminate the problems from recoil and make this design more sensible.

And, Newtons third law of motion appeared. This always appears when discussing physics even if the people they are talking to clearly knows about it. I find it absurdly redundant for you to remind us of that.

I googled collapsible guns and they don’t really look like this. Yes they are boxy but the aesthetics is still different.

If it’s an electromagnetic gun, then when you shoot with it, it does not create any explosion / fire? And therefore you don’t also need that muzzle compensator attachment. 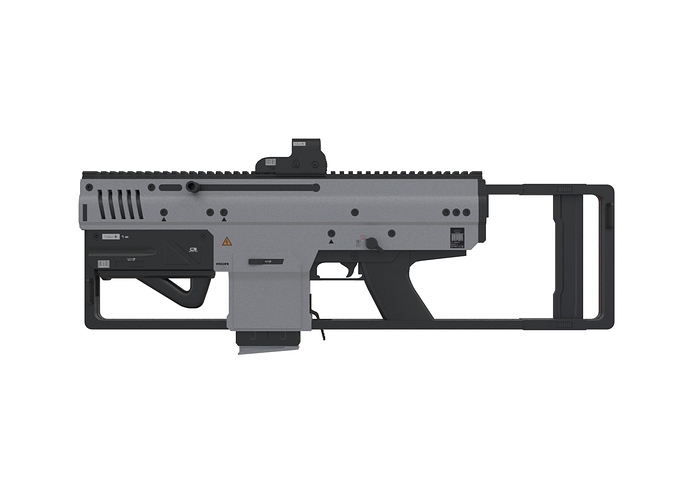 Looks like a rail gun can produce some fire too…

That’s because the projectile is contained in a shell (not sure why, probably to improve the response to the railgun’s magnetic field).
Once the thing has left the rail, the shell blasts open and exposes the more aerodynamic bullet.

On topic: that’s an improvement on practicality.
Maybe the stock could be detachable, but maybe it already is

it collapses inside to less than half its size.

I still have a problem with that forward grip…

That gun looks very terrible, and there are some basic conceptual errors that would prevent me from wanting it, even if only in fiction :P.

First I respectfully disagree with a single point from AdamTM’s reply: The grip of the first version is totally fine with the ‘railing’ behind it (for 2 handed), although it really needs a stock of kinds and the sight should be way forwards. There are lots of ‘thumbhole’ stocks in real life that have much less room behind the ‘grip’ part, and they’re perfectly fine. Now, that design probably isn’t comfortable at all, but that’s another issue. In terms of ‘grip’ you would be able to hold it very securely imo.

The conceptual error is that the electromagnetic pulse technology sounds like total bs in my somewhat educated ears :P.

Unless the gun provides some kinda propulsion system to counter balance the recoil, even if only displacement of internal weighs, it’s totally gonna have a recoil no matter what. Unless of course the projectiles have self-propulsion, but in this case the gun would be much more simpler than that. You wouldn’t want not even a closed barrel, perhaps just some ‘sticks’ like tracks to drive the projectile because a closed barrel in that case would only provide friction and recoil, even if the projectiles are self-accelerating.

Since it’s a sci-fi device, you could just say that the projectiles have little mass and are highly explosive or something… or that they are so hot that melt whatever surface it hits almost instantly, something like that, because that electromagnetic pulse to accelerate passive mechanical bullets in a recoilless fashion totally didn’t convince me :P.

That talk that “newton’s laws don’t apply in the future” totally get me going the opposite direction :P. Physics is not going to change in the future, and with that in mind, if you really think about it, a recoilless gun probably will have a wildly different design.

That reflex sight also looks very cheapo even for today’s standards. Far in the future you will have much larger ones to make it easy to aim while moving, holographic sights and laser sights that are only visible with the correct head gear are totally gonna be a thing.

For the “standard” weapons, we are going to see less manual interaction (levers and stuff) and more reliability with simpler mechanical parts. Explosive rounds and even ‘intelligent’ rounds are totally gonna be a thing in the future I guess. Although I really think that eventually personal weapon technology is going to be unimportant. People are inventing much more effective ways of killing each other at an impressive rate. In the future having a gun will be like having a knife. It would make you king in the stone ages, but these days it will only get you killed.

I think it may requiere some re design as it doesnt fit well with the style of the weapon.