Need help cutting off a tentacle

I’m a fairly new noob at blender. I made a killer worm like from Dune for a movie we’re making and need to figure out how to cut off one of the tentacles. I can separate the vertices and make it a separate object, but then when I rewind it to the beginning, it starts off separated. I want to learn how to get the tentacle to be cut off in a later frame and fall to the ground. Any suggestions? 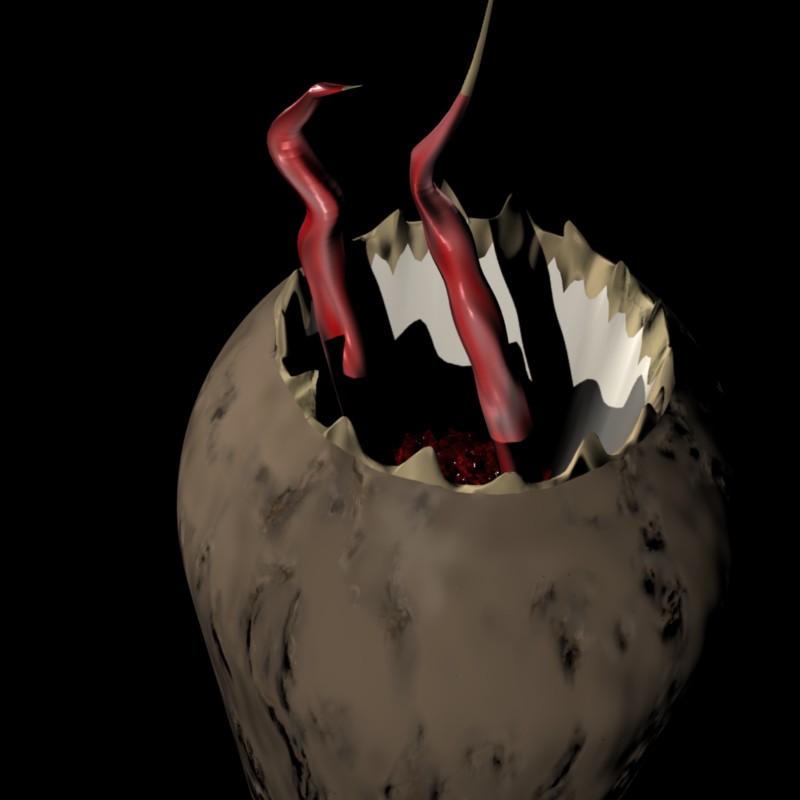 I’ll be watching this thread, as I’m interested in finding out how to do that, too.

My best guess is that you’d have to make the part you want to cut off a separate vertex group, and then animate it as so, moving the bone away when necessary (I guess it wouldn’t be connected to the other bones). But I’m not sure, that just makes sense to me.

Hm… Is it possible to make the bone connected in the beginning, and then switch to disconnected at a set frame?

How do you do stuff like this? You cheat.

Duplicate the object, and cut it. Then hide it on a non-rendered layer until it’s time to cut the tentacle, then switch the objects.

Or, end the animation on the frame before the cut, and begin a new animation one frame later, and splice them together in the Sequence Editor.

Or, have the cut object somewhere off camera, and in between frames, move it into position, and move the uncut object off camera.

No one will ever know…

Remember, animation is a series of still renders, shown quick enough to seem to be moving. Your job is to get Blender to make that series of stills. It is not about modeling reality.

Orinoco is right. If you want to hide the transition, put a little blood spray/mist particle system at the cut point.

Still having problems getting it to work right. I split the tentacle in half, but when I try to rotate the tip (the part that got cut off) to have it fall off the screen, the body jumps to reattach itself to the tip. I just can’t get it to move independently from the main body!

Chances are you’ve got both halves of the tentacle connected to the same IPO block. In the IPO window, when you have one of your tentacle halves selected, you’ll see the IPO name, probably something like IP:ObIpo.001 or IP.ObIpo.002. After that, you should see an X to delete the IPO data block, and an F to attach a fake user. If you see a box with a number in it, like 2 or 3, then your IPO data block is probably connected to BOTH of your halves, and will move them the same way, so they still seem connected.

If you click on the 2 or 3, you should get a message asking if you want to make the data block single user, which you do. After that, the other object will have it’s own IPO, but it will be a copy. The good news is that you can now change the copy without affecting the original. Or you can delete the copy, and set new IPO keys for that object.

Aswesome, that worked! Thanks a ton Orinoco! You too harkyman!

So, that worked great the first time, now I’m trying to repeat it, only when I go to the IPO box, it’s not showing me the 2 or 3, or even the X or F. What am I doing wrong now?

They do show up on the Action editor, but when I make it a single user, it won’t let me animate the cut off part individually.

Ummm, your going to have to start showing us some screenshots of your situation, it gets a little tricky trying to diagnose things with out some images. Beginner terminology is sometimes hard to follow, and a picture can be worth a thousand words.

Crtl+Shift+F3 will take a screenshot, and the Manage Attachments button (scroll down when posting) will let you attach it to your post. The paperclip icon lets you select the attachment and add it into the body of the post.

Ok, here’s the screen shot, IPO window is bottom right, but there’s no 2 or 3 next to the “object” menu bar like there was last time. It’s the last 1/3 of the tentacle I’m trying to have “chopped off”. I know the tip isn’t selected in this shot, but nothing changes when it is selected. 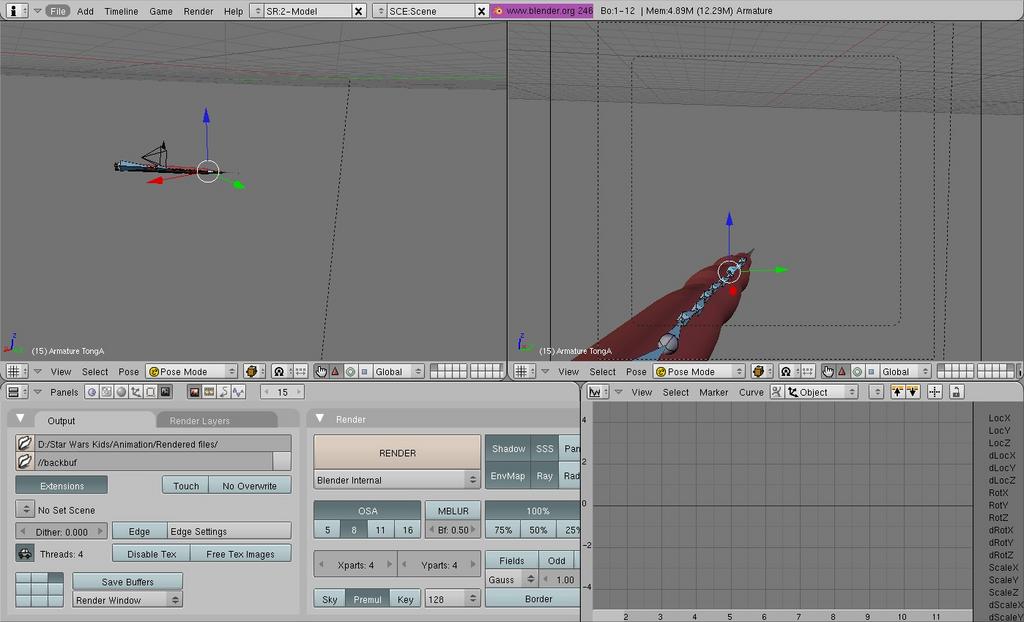 You’re in Pose mode. You’ll see the IPOs for that particular bone if you switch the IPO window selector to Pose instead of Object (assuming that bone has keys set for it.)

Ok, well, I got it into pose mode now, but there’s no 2 or 3, so I guess that means the data block is not connected? So, what can I do now to separate the two halves? 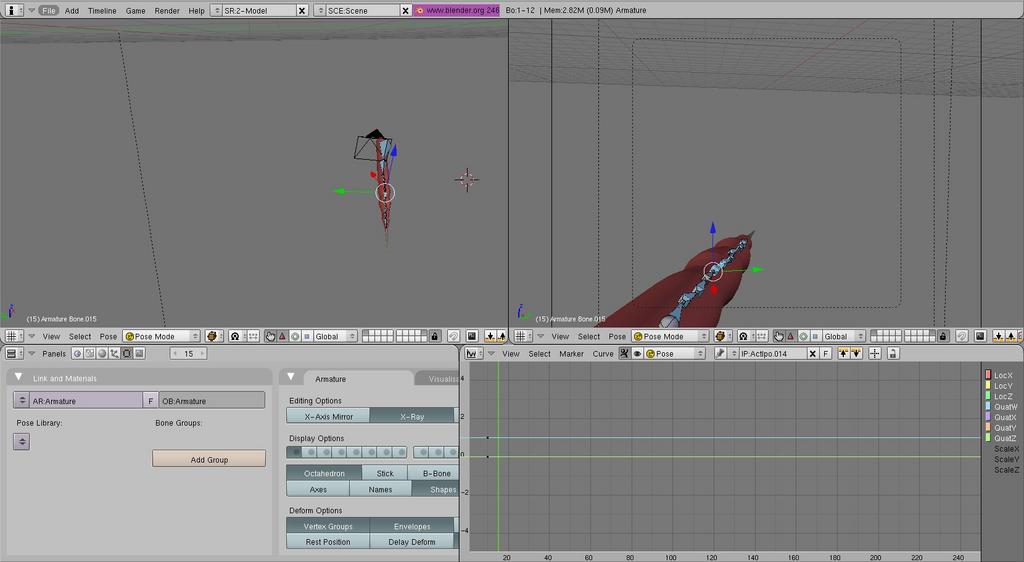 I outlined three possible ways to manage this, but I don’t know which you are trying to use, if any. How are you attempting to go about this?

From the looks of things, you have one tentacle mesh and one chain of connected bones as its armature.

You’re correct on how 've got it set up. One mesh connected to a chain of bones. I’ve been trying to split the mesh at the point I want it cut off, then (with or without the bones) have the tip of the tentacle fly off. I couldn’t figure out at all how to separate the bone with the part of the mesh I split off, but as long as I can get the mesh to separate and rotate, I guess it doesn’t need a bone.

I really wasn’t kidding when I said earlier you have to cheat to do what you are trying to do. You can’t get this done by trying to simulate reality. Won’t work. Blender isn’t set up that way.

Where are you hiding your duplicate, already cut object?