Need help emulating the style of another artist.

The works in question are as follows Basically what I’d like to do is take premade models (Mostly from MMD, though I might mix in ripped models at a later point) and create renders with them that look like toy photography, mixing the renders with actual photos.

What I need help with is getting the models to look nice, and this artist has figured out how. The problem is that I haven’t been able to get in contact with him. Any times I have gotten in contact with him were met with “I’ll make a tutorial soon”. Now, he HAS made a tutorial, in Japanese. I cannot currently get it as I am at school and the site it is hosted on (nicosegia) is filtered for sex. I have also made several attempts to follow the tutorial (including trying to replicate his skin shader, to no avail).

I’d like to ask how one would replicate his skin and cloth shaders. Mainly those ones. I’ve talked to him about how he did his cloth shaders, and all I remember from that is that he said something about creating a normal map from scratch and the original textures. Now, the problem with that is that MMD models sometimes don’t use textures, instead substituting them for plain colors.

Thank you all very much for reading!

It’s easy. Take the model, subdivide it, and sharpen the edges that need to be sharp to retain the shape which will overall improving the polycount and smoothness while having the same effective/important shape.

If you have textures…
Take the textures into Photoshop or Gimp, upscale them, then use the brush tools among other things to improve textures by hand using the original as a template. You can even do some of this inside Blender with it’s painting tools. Make some normal and bump maps. I personally would hand paint it from scratch in a 3D painting app, Blender can sorta do this.

Materials are materials, learn to use the node editor and anything is possible. Just consult the material sub forum here if you need help with those.

Learn about lighting from YouTube and set up some lights, this is pretty easy. You’ll probably want to construct some sort of set though.

Render it out in passes and use Photoshop or Gimp to combine and tone these to your linking and then use whatever tools to tweak the final look.

Any ideas on how to go about replicating the cloth, eye, hair, and skin materials?

I know tetsuok (the artist) made a small tutorial on how he does his skin. 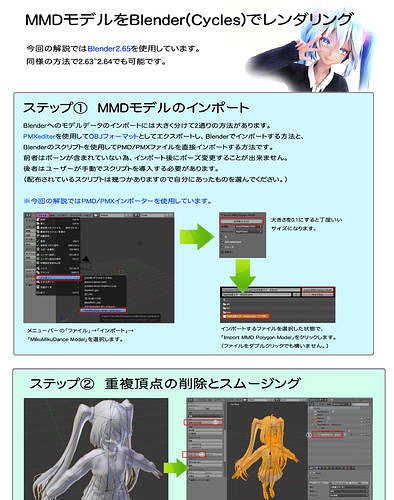