Need help in copying something over the other side of object, mirrored, same position

Ok well to expand on the title, I’m making a Bionicle custom mask and need the whole thing to be symmetrical. So far everything has gone smoothly and it’s all symmetrical, but I’m stuck on how to copy the tube over the other side in the exact same position but of course mirrored.

Here is are some pictures to better explain: http://imgur.com/a/5FwMV

As an added question: is there a better, more precise way of adding the support cylinders along the tube so that they curve with it?

Use the mirror modifier and move until you like where it is and press apply, the mirror will become its own object.

Or you can use an empty as the mirror center.

You also can duplicate the parts you want mirrored… (Shift+D) then set the 3D cursor to the center of your mirror opperation… hit ‘.’ (period key, or, full stop key) (to set the pivot point to the 3D cursor and not the object center)… then Hit Scale… (looks like along the ‘y’ axis) … and then negitve 1… key sequence… (S, Y, -1)

Sorry if this is a stupid question but what is the 3d cursor?

The mirroring part isn’t working at all. I set the cursor, shift-d, ctrl-m, nope. it just stays exactly the same and ctrl m does nothing.

Thank you so very much!

Sorry if this is a stupid question but what is the 3d cursor? 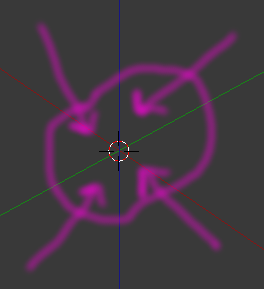 and no such thing as a “stupid question”…