Anyone know how to use Shadeless Material on cycles?

I searched in forums, in the Node Editor but could not find.
Could anyone help me?

What’s the idea? Cycles is kind of a tool to go realistic which is not the case for shadeless materials… Emitter with no shadow light path maybe… Like this 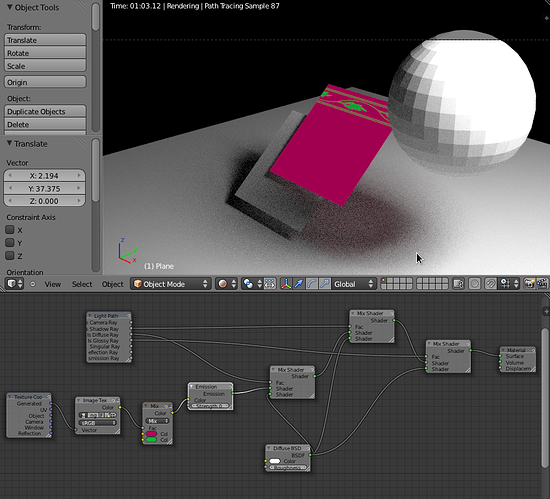 i see a texture image mapped as generated but to what object is this applied ?

but is this really shadeless?

shadeless measn that light is coming from all around the objects and does not produce any shadow !

a sample file would be nice here !

Sphere shows where light’s coming from and casting shadows on two (three, ground included) planes. As you can see there’s no sphere shadow on red textured plane whereas it is on the next one and on ground. So the red is kinda shadeless.
Really, there’s only one more plane being light source and famous Sanne’s glas b/w texture which i colored by this node setup.
And i deleted file already…

i think it’s a little more then that you also need a contant light soruce all around!