I have been watching a lightning tutorial but I’m new in node editor.
The whole seen is white which I don’t want. I want the lightning to glow but not the city. What’s wrong with the node editor?
Please see attachment: Lightning(Test).blend (652 KB)
I render using blender internal.
Thank you.

Almost without thinking about it, I always add a Viewer node and set the backdrop-option so that I can see in back of the node-window whatever the viewer is looking at. Then I connect that viewer one-by-one to each output of interest so that I can see it in isolation, moving systematically from one to another, thereby “debugging” the network. (You have to do one “Render” first, to calculate all of those things.)

When I say, “debugging,” I really do mean that quite literally: a node-network (“noodle”) is “a computer program,” albeit expressed visually. It flows from input to output to input to output. The best strategy is to build it up a piece at a time, as best you can, but then when you discover that something’s wrong with it (and you will, a great many times) you have to start working backwards to “debug” the thing. When you start getting into really complicated networks with node-groups and so forth, the techniques become even more of a challenge.

When I (briefly) looked over your work, the first thing I looked at was each one of the inputs. They looked good: an isolated lightning bolt; an isolated city-scape. I also didn’t see the “white screen” so I presume that it was coming from you having not re-rendered recently. When I saw that the output of the “blur” node wasn’t blurry, I knew I’d found it (just as kazinger had already done). Each of the other add-operations looked appropriate to me.

Sorry, my English isn’t good. What I mean is I want the CITY (not talking about thunder) to look like this 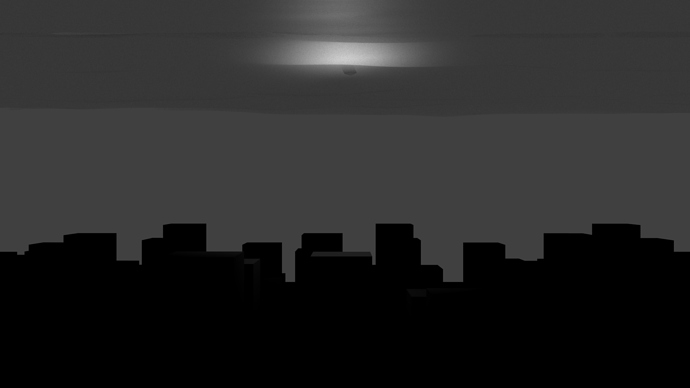