I made this panda for a vr game.
He is pretty low poly and really fat so I’m having some troubles rigging him properly.

So ye the question is what do I do to stop that from happening.
Should I change the weight of the bones or add more bones or verticies?

The arm in the attatchment is just an example.
I’m getting some other problems aswell mainly because he’s just too fat and I don’t know how to rig that. Even a low detail character needs some extra loops around joint areas to help keep the forms from collapsing. Usually wires don’t matter much in a high poly mesh used for baking. Not to me at least. If it looks like what it was intended to represent, then it’s all good. But a low poly model being used in a game needs certain considerations.

If you could show the wires in this case it might help people advise you on how to proceed. A couple of images of the model in weight paint mode could be of use too. Particularly of any areas you’re having issues with.

The elbow area looks like it could use another loop cut in. But without knowing what the topology looks like, it’s hard to say whether it’s that or distribution of weight.

Ah ye here you go.
I was trying to add some sort of kung fu animations to him so he needs a lot of flexibility.
I did find some tutorials on how to rig but they never really give an in depth explenation on how to properly rig a fat person. 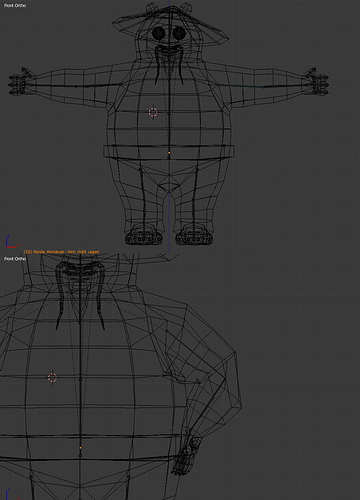 Joints are always tricky to get working well. Especially shoulders. It looks to me like you could use at least another loop on either side of the elbow. The same would probably apply to the knees.

Ben Mathis has some simple, but good, advice regarding low poly meshes.
http://www.poopinmymouth.com/tutorials/limb-deformations-tip.html

So what way do you have the weights distributed around the mid-section? What exactly is happening with it that’s causing problems?