Need help with the function of these nodes

Hello everyone. I am quite new to modeling, and texturing especially. I found this tutorial on youtube by a great Youtuber.
The problem is, he does not always explain why he does a certain thing, so it was up to me to do some research. It is hard to see what each node does from the video, but my PC is pretty bad, and this scene loads like 15 minutes and it would take hours to experiment with every node in context and see every minor change. So I did some research on google, and googled each node and its fucntion. I guess I understand them individually, but it is hard for me to grasp it in context. I will start with some basic node tutorials on youtube, but I still want this explained, as I want to finish the scene. The first attachement shows the nodes and the second one the scene in rendered mode.

Here is what I think/dont understand.
Firstival, what makes the scene look “cool” is the fact the the grass is quite bumpy, meaning not flat. I cant understand how he did that. Because he did not use any nodes for that. He just enabled experimental mode, and auto adjustements in the subdivision surface mode. I just cant see the relationship between this and the surface of the texture. I am going to start my thought process from the beginning here:
There is the texture/image coordinate, the scale function enabled us to change the resolution of the texture. The UV goes to both textures (the normal grass and the rocky one on top of the hills).
Lets go with texture 1 now. It goes to mix node with Texture 2, which uses the stencil texture as the factor, so it automatically assigns the textures to each color on the stencil.
Now I am confused as a second mix node comes. Why is this one needed ? Because there is a third one right after using the same texture and the same stencil, but with just noise coordninate and multiply added. Why did not he do that in the second mix node ? For the noise texture, I think it adds a certain pattern, and the multiply textures pretty much multiplies it across the scene, in this case in spread the bump across the scene. I still dont understand though, how blender knows it supposed to create the bump. After, there is the last mix node, which has the same structure as the one before, but just flipped around, meaning noise and multiply go to color 1 and mix goes to color 2. This pretty sets the pattern for the other texture, but how does blender know it is supposed to do that ? We have both textures connected to the first mix node, so if there is a chain of nodes, the first one always adjust which color input is which texture, and the rest of the mix nodes depend on that one ?

I understand what happends in the bottom with the Diffuse BSDF node, but I would so glad if anyone could explain the top part.

Thank you very much for reading this long post. I dont think I will have any trouble finding tutorials on youtube, but if anyone would know a website of a book, which would work sort of as a cook book - you would have a tutoraial on how to create a realistic wooden texture with info what nodes to use and why combine them.

I am looking forward to some answers.
Cheers. 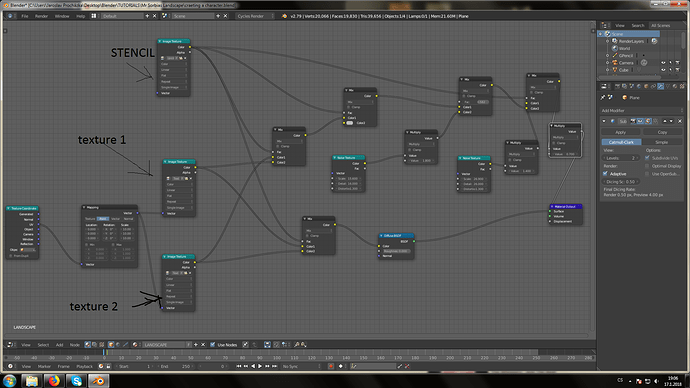 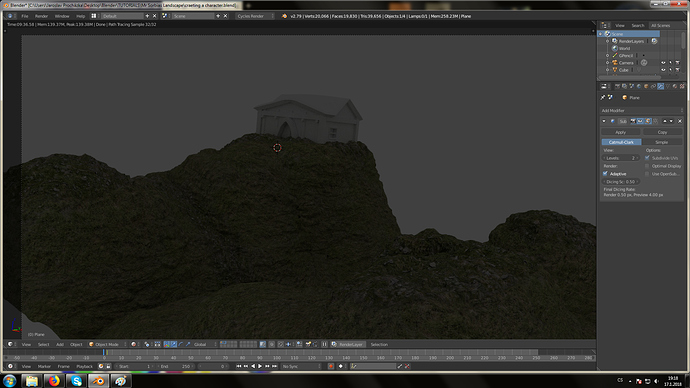 Here is what I think/dont understand.
Firstival, what makes the scene look “cool” is the fact the the grass is quite bumpy, meaning not flat. I cant understand how he did that. Because he did not use any nodes for that. He just enabled experimental mode, and auto adjustements in the subdivision surface mode. I just cant see the relationship between this and the surface of the texture. I am going to start my thought process from the beginning here: 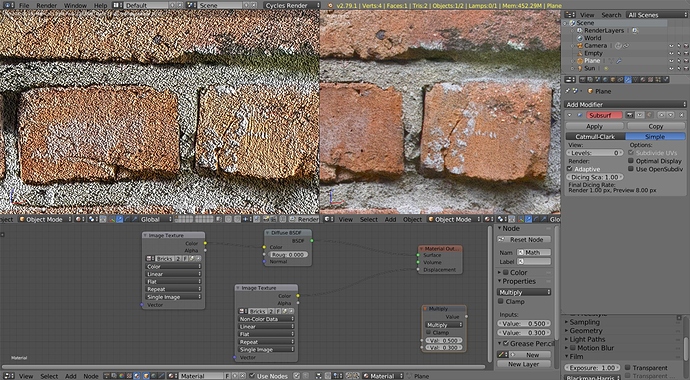 The bump/displacement come from the - Displacement input in the Materiale Output.

Setup is very bassic just to show first step and where it come from.

It’s what You see in Picture.

See Supsurf in picture…It’s set to 0 Level and Simple…You use the Adaptive to set size of resolution.

In Render - Geometry Tap there is more settings.

Last…:)…The unselected node in the Editor is a Math Node set to Mutiply.

Can be used to set the strenght of the Displacement.

Hey thx, I understand a bit more now. So pretty much the bump is set by the noise texture and the displacement input just “enables” it. I did not realize that, but what about the “chain” of mixshaders I talked about, do you have maybe an idea how that works ?

Thank you once again for you help.

What I can see is:

There are 2 texture and a stencil to be mixed and there are 2 Noise texture that will be mixed in as well.

The Mix Node is used to connect the different texture…To 1 Output.

Hmm…Noob here…Hope You get a little step further…