Need Help with this one piece!

I need to do this one Handle, but I only have this one Reference Image.

I already done the TOP part, but how can I approach that “Flower pattern” ?

Maybe I need to do this Vector with Illiustrator, then Trace it and import as SVG File ?

Any help would be nice, thanks

I would probably do it like that, get the outline right in illustrator,ink scape or Affinity designer then export it as a image to blender and trace the image. I think you might be able to import svg and use that in some way but that might end up taking longer than the project itself. What is the purpose for this project? Is it learning or the end result(as in is there a deadline)?

I think curves are definitely the way to go here.
You can either draw them directly in blender with a curve object or in another application and import them afterwards.
Beveling the curve with another curve profile and varying the profile’s thickness with the curve radius should get you close. There are many tutorials on youtube outlining the general approach.

When testing, I also found that using a Remesh Modifier helped merge the different curve segments together and give it a cast look. 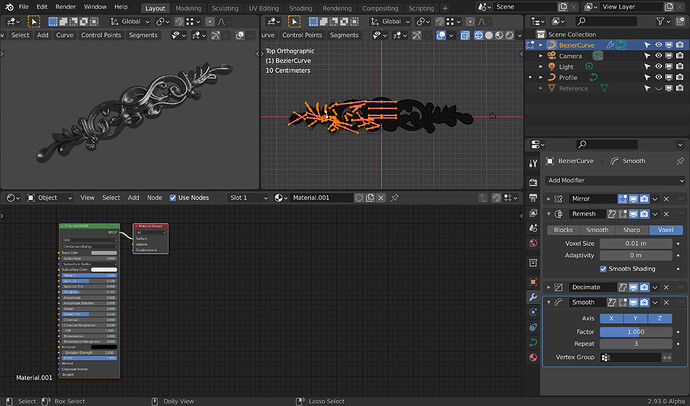 You can also check out the .blend-file in case I wasn’t clear enough about the setup:
floral_pattern_test.blend (1.9 MB)

You are amazing human being!

Why wouldn’t you import as SVG?

Well @Spaceboy64 lets just write this down to me being an idiot and not realizing things get better and that me having trouble way back when does not correlate with things being hard todo right now.

Quick attempt. lol, Nailed it!. Bevel profile on the curve as well to get that edge?