Need some critique on lighting/compositing

I need some critique on how to improve the lighting and compositing. 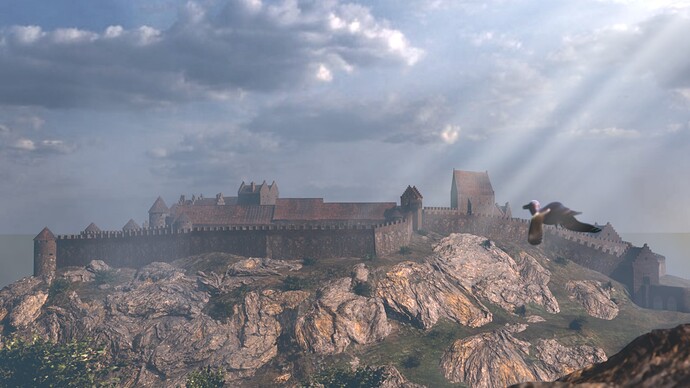 The atmospheric fog seems too uniform, The nearby rocks are too dark and small to convey distance.

Thanks. I’ve added some foliage and birds. Also adjusted the fog.

Some kind of sun rays maybe through the clouds would make it look majestic, I dunno if it’s possible to have some sun rays hit some of the roofs or if it works compositionally, but yes.

now your bird in the foreground looks wrong, shouldn’t the bird’s head be out and straight forward rather than the neck curving up? Of course I wouldn’t know how this species of bird flies.

Some new render. I’m having a bit difficulties adjusting the post-comp, so that the same settings can be applied to every angle. Any ideas? 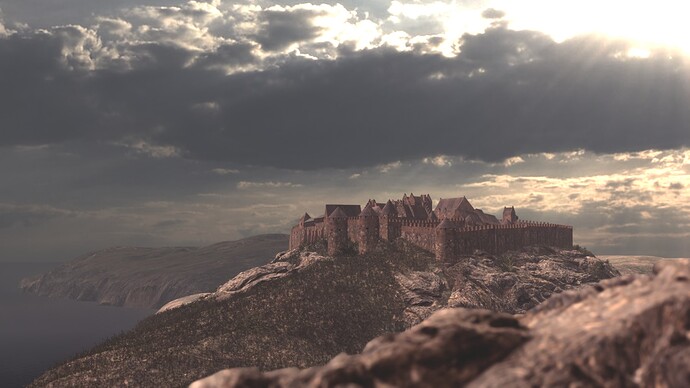 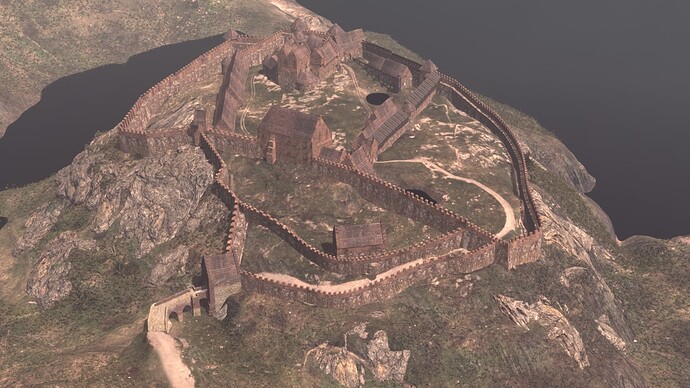 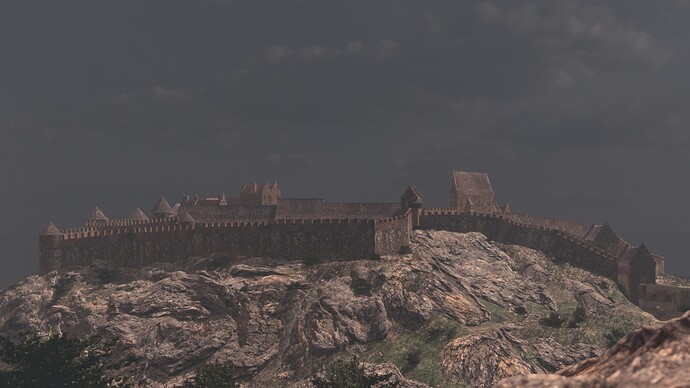 The first one of your new images is a lot more interesting. The composition works because you have some foreground in the right lower corner, it moves along to your main object and then continues towards the left in the back. Perhaps it would be interesting to put some secondary eye catcher in the back left. A light house or something. Something that merely compliments the main object but does not compete with it.

Thanks for the idea. The problem is, however, that this is intended as a reconstruction of an authentic castle. There was no light house or anything else. This is Hammershus Castle in 1576.

I don’t know what could be done to improve the lighting on the last of the new images.

This is intended for an animation, I’ve already exceeded my own upper limit of 5 sec. render time per. image (Eevee).

Some update. What do you think of the lighting and sea gulls? 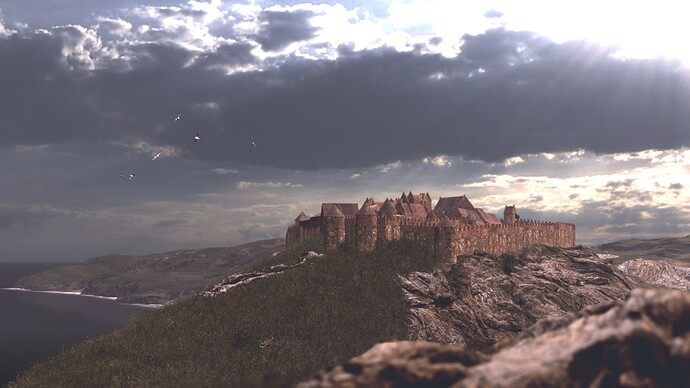 Looks good, except the high contrast on top (clouds) that ask all attention.
What if you zoom in a bit and lower the camera? In other words without the top part of the clouds
?

Not seeing what’s wrong with the clouds based on your description.

Ah, ok. I thought the castle in environment was most important. But if its about the clouds it’s good, that’s what I keep looking at.
Though, if it’s indeed about the castle as I initially thought, then the composition is not suitable: If you close your eyes a bit so that you see a waze of the picture, you barely see anything of the castle. The castle is qua level and contrast on the same level as the rocks. The sky and clouds stand out a lot; contrast is high, draws all attentions, god rays are guiding the eye to the right top.
I just answered this thread because the title says you need some critique.

I don’t think volumetric is a good choice here.

If your end goal is visualization, that is to demonstrate various feature of the castle and its layout, it is no good to make the subject less clear.

You also need to show the form and geometry of the castle. At the moment the lighting is coming from the camera in some of the shot and the shadow it casts is all but clear.

The HDRI here is quite diffused, I’d replace it with a directional light. 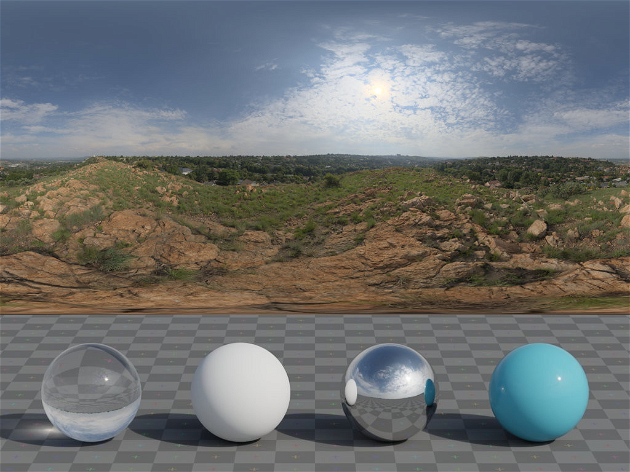 Something like this would do fine. The cast shadow is very clear on this one.

Plug in an ambient occlusion node to enhance the cavities.

If your light doens’t change you can also use the irridiance volume to bake in some indirect light. There needs to be sufficient contrast between the light and shadow for the bounced light to show up though.

The foliage is also kinda dull.

Hi all! This is my long-term project that I had been working on for 2,5 year. I wanted to reconstruct and visualize the Pińczów Castle that was dismantled at the end of 18th century. The whole project includes 21 shots rendered in Corona at...

A quick paintover for suggested lighting setup. I do think you need to tweak the color. 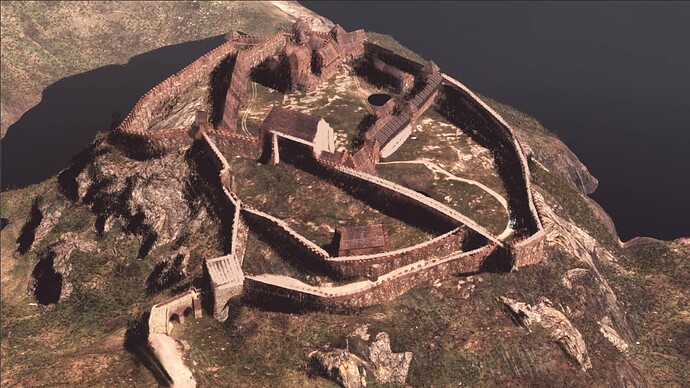 If the render time is too long get rid of the particle bushes and concentrate around the castle.

Ah, I now realized you are using EEVEE.

As the EV Express addon developer and EEVEE Production Suite, I think I can come with some advice. I did loads of experiments over the past two years with EEVEE, did research, loads of experiments, followed courses, talked to people, and made my own Blender EEVEE Tutorial series on Youtube. And this is what I would like to emphasize, the biggest problem with EEVEE under Blender users:

Forget about HDRI / World light in EEVEE; without exception, it will always kill your render. Why? Because world lighting / HDRI doesn’t cast shadows in EEVEE.

Some use ambient occlusion to balance it, but it’s just not a solution to solve that limitation with environment light in EEVEE. Besides that, ambient occlusion is a screenspace effect and is not suitable for animations.

Despite my efforts, there are loads of Blender Users using Environment light with EEVEE. For example, open Instagram and search for #eeveerender and ask how they set up their lighting. You see it in their renders immediately (strange thing I didn’t catch that in the first place here).

If you are interested in the tutorials, the playlist starts with this video:
https://youtu.be/sFj_0YJ2fms (This sentence removes the thumbnail, which was a bit dominant here)
The first two videos cover exactly the problem I describe here.

So, but how to render a big environment in EEVEE then. This is quite a challenge, because if you can’t use world light, the only thing that is left: lamps. You need loads of lamps, and for the amount of lamps there is also a limitation. The EEVEE Production Suite is using several techniques to catch up with those limitations, but still, a big environment is a challenge. It could be that you need to scale down your landscape as well, and a use a big distance of the lights.

You can use world light, but not to light up your scene. I am not using that technique so I don’t know from the top of my head the exact steps, but you need to use the light path node in the shader editor > World to see the hdri in the render (without letting it lit up the environment). Then you could match up the lamps with the HDRI. It’s also tricky, that’s why I don’t bother about big environments in EEVEE and find EEVEE suitable to showcase your asset, mostly. Or medium sized environments but then sci-fi. On top of that nature with vegetation is an extra challenge (shaders) in EEVEE. So big nature environments is probably the worst choice for EEVEE.

I am not saying it is impossible to render big environments in EEVEE but it is very hacky and not reliable.

Ah. I was wondering why the scene has no cast shadows. That is quite unfortunate. I usually hook up the lights with a blackbody temperature. Eevee doesn’t support node for the lights. The lighting from color picker looks unnatural most of the time. (Sunlight is actually slightly yellow, if you lit the scene with just white the scene would look washed out, combined with the ambient light, which is usually slightly blue gets you a nice subtle contrast.) You can get both done with decent hdri.

Eevee is pretty good for anything that is high contrast and with a strong directional light. The baked diffuse light isn’t really that good at illuminating subtle details and looks flat most of the time.

You could do that without hdri but then you still have to composite a sky texture that matches the scene lighting on post. I don’t think that would save time over just rendering it in cycles.

Also the sky reflection probably won’t show up in the waters during fly over cause it’s screen space?

Also, the sky reflection probably won’t show up in the waters during fly over cause it’s screen space?

I focus purely on how to get the best out of EEVEE with only lamps. Because that is how EEVEE has been designed so far. You can get sky reflections with Light path, is Reflection Ray, but I find the workaround so hacky that I don’t bother it.

The baked diffuse light isn’t really that good at illuminating subtle details and looks flat most of the time.

Thank you for the feedback. Much appreciated.

It’s not the shadows that are too faint, that is the issue here. It’s the opposite, so I had to put extra sun lamps in, without casting shadows, to soften up the shadows from the main sun.

It’s very tricky to work in Eevee, but I think it’s worth it, due to short render times. A scene like this including full particle systems + Post Processing in the Compositor, renders each frame at 5 sec in 1080p on a 3070 Ti. I have to keep it below that limit though, because I’m going for a full 2-3 minutes animation.