I need some suggestions for new hardware aimed at rendering as my desktop starts to get abit old.
What do I need to consider for the best rendering speed and performance? What experiences do you guys have with your current hardware? I do mostly outdoor simulations and some minor inndoors environment.

I also switch between Maya and Blender for modeling and composing. Price is no problem as I have a system for moneysaving. I am by no means an hardware expert, so I hope for some advices (No hardware wars)

GPU: Asus GeForce GTX 680 DirectCU II OC 2GB
There are much better up to date GPUs and the 2GB onboard memory will probably be a stumbling block for rendering any complex scenes

It’s a good time to plan a hardware upgrade as several next generation components from major vendors have just released or will be shortly. This is my running spec list for hardware I’m considering for my 2016 CG workstation upgrade.

Some considerations:
Many new Blender features are CPU only with GPU support following slowly. Multi-core CPUs are useful in that case. However, efficient threading support in Blender is a WIP with some features performing better than others. I have seen Blender take a long time to finish operations while the CPU was maxed at 20%
Cycles rendering scales well on multi-GPU but SLI should be disabled
I rarely utilize all 64GB of RAM, mostly during high resolution simulations or large subdivision operations. 32GB should be enough for most stuff.
Water cooling is a advantage for long running Cycles renders

Thanks for the technial info

Which motherboard will have the most functions to fully utilize most of the bandwiths on the components? If im getting 32G of ram and a Nvidia 1080? Also, which CPU is best for rendering speed?

Pick a CPU/GPU combo and then select a motherboard and other components to build around them.

CGI is primarily compute bound, so the 20 threads in the Broadwell-E above IMHO is the most useful for rendering. Modern CPUs can utilize fewer threads at higher clock speed for non multithreaded operations but I never bother as the enthusiast grade chip allows overclocking.

Motherboard selection should support multi-PCI capacity you’ll need for your selected GPUs. The Pascal based 1080 above will very likely be the fastest card for Blender for many reasons but only time/benchmarking will confirm that. You have flexibility with mobo choice but match your CPU/GPU support needs, for example X99 and LGA 2011-v3 socket in the case above.

Chose high density RAM like the above to give you the option to upgrade to 64GB if needed. Your mobo should provide RAID to maximize SSD storage speed and resiliency, you’ll appreciate that for Blender VSE editing. I’ve added my last build log above with more details.

My laptop which I use now has a Haswell cpu according to cpu-z. It does handel simple fireparticle scene decent but then heat is a problem. While speaking of heat, do you think it is necessary with a watercooled gpu or will a good amount of fans in the case do the job?
Noise is no problem as I have my case in a seperate room and barly hearing the pc. My current cpu is watercooled.

Thanks for the link and the advices

Will see what I end up with.

Of course. Happy Blending and run Blender/Cycles benchmarks to share back with the community when you do get it together

Allright, I have looked around today and came up with this list:
I checked motherboard size for the case, made that mistake before.

The LGA 1151 socket is choosing your CPU architecture but it appears pretty forward compatible and hopefully you’re intentionally aiming for Skylake. Various builder sites benchmark processors and Blender Cycles which can be found by Internet search.

I want to be super clear that the GTX 1080 (Pascal) has not been tested with Blender yet so until we see benchmarks, there’s a small risk of compatibility. I’ve been reading about an ongoing GTX 980 Ti (Maxwell) Blender Cycles performance issue (bug T45093) which is unfortunate for those who bought in advance what must have been an obvious choice. I’m a risk taker and will buy the 1080 on specs alone, knowing our Blender developers are clever and will get it working in due time. We should all know more in the next month.

Also, your power supply is hugely overpowered!! A 1080 has a TDP of 180W, even overclocked is unlikely to go above 250W max.

Your CPU (assuming Skylake) would be 150W absolute max if you overclock it to close to 5GHz.

The rest of the system will easily fit into less than 100W, a 750W power supply would be plenty to run 2 GTX1080’s and an overclocked i7 Quad Core.

So I can save big money by not upgrading a PSU? The one I have now is 750W. Which processor would be a good choice for the motherboard? Also, if I do not choose the 1080 and go for a 980, what would the difference be? Do I really need 8GB or is 6GB enought? Will the 1080 be overkill for my purposes? Im not doing VR, only outdoor simulations with huge texturestreams, foliages and water.

Im looking at a 980 priced 8000 NOK. But then it comes with finished mounted water cooling: https://www.komplett.no/product/850831/datautstyr/skjermkort/pci-express/evga-geforce-gtx-980-ti-6gb-hybrid#technical-details (Sorry for Norwegian text)

One more, I have a HAF932 case. Is it worth upgrading that or is the airflow still useable? 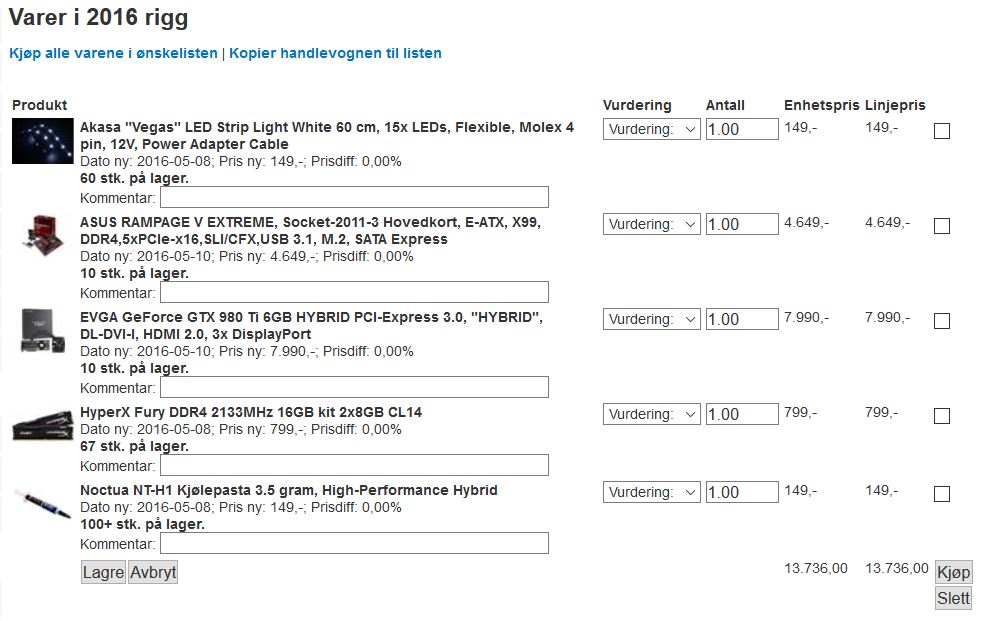 That is the same 980 Ti card which Blender is currently seeing performance issues with on Windows 10. Sergey (Blender developer) is assigned to that 980 Ti bug and I have confidence he’ll fix it in time. However, if “Price is no problem” as you say, I still recommend the 1080 as it comes with a significant jump in performance.

CPUs/GPUs are never fast enough for Cycles. It’s best to buy the fastest CPU/GPU as you can afford and it will last you a while. My CPU recommendation above stands if you have the money, if not scale it back to what you can afford.

Your PSU is not an expensive PC component and splurging on a powerful one IMHO is forward thinking and leaves room expansion such as multiple GPUs, etc…

Sergey (Blender developer) is assigned to that 980 Ti bug and I have confidence he’ll fix it in time.

From the bug thread, it sounds like it isnt blenders fault but more windows fault…

If you are planning on only using it for rendering… load linux… its faster, more stable and doesnt have the 980Ti bug in it.

if you want to use windows… dual boot.

I always used ROG components as they got the best stability and OC functions and more i/o possibilities. So a ROG motherboard is a must.

It will be Windows 10 on that build. Im saving up in 22 weeks before buying

So I have plenty of time to look around. Now that the GPU and CPU is ready, the motherboard is next up. I will most likly choose a ROG motherboard. Current list: 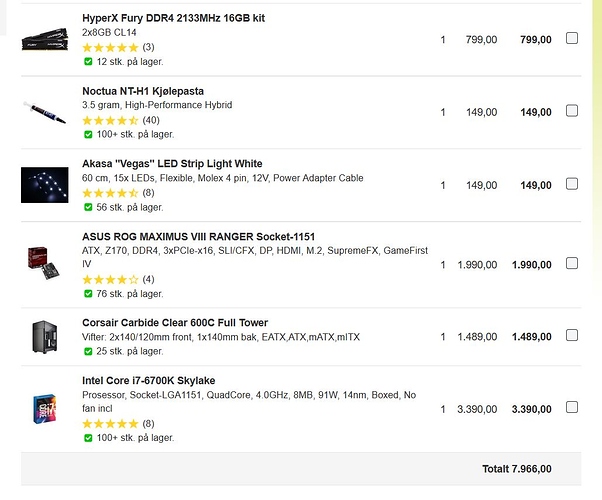 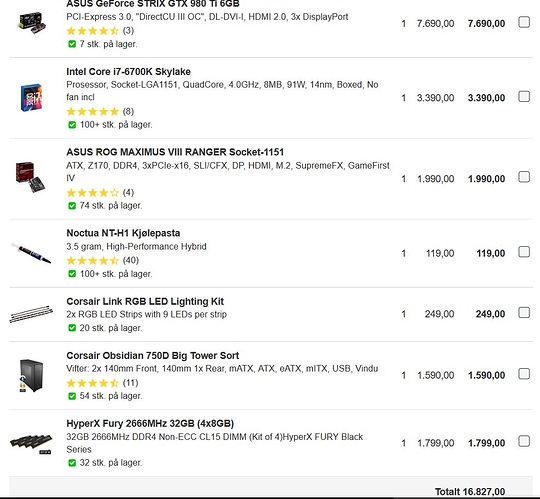 At home i am running linux mint, at work we are running windows 7… but looking at switching to a linux distro for rendering purposes.